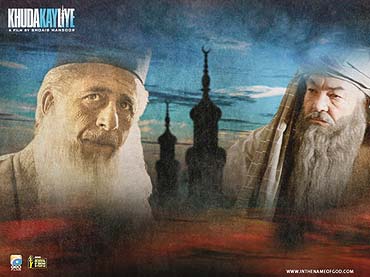 Inside the hall, the audience cheers wildly through the riveting drama on the screen. It watches in rapt attention Indian actor Naseeruddin Shah essay a mesmerising cameo as only he can. The response at other theatres is equally feverish. Akram Khan, owner of Shabistan Cinema in Lahore, is ecstatic: "I bet the film will rake in millions. It's drawing crowds because it is a Shoaib Mansoor banner, and also because of Naseeruddin Shah's fame." Shoaib Mansoor is a legendary figure in the Pakistan show business. Having directed a clutch of astoundingly successful TV dramas and music videos, his banner was bound to elicit a strong initial audience interest.

But KKL is special because of its subject: it captures vividly the clash Pakistan is witnessing between moderate and radical Islam, as also the suspicion a Pakistani evokes in the West post-9/11. KKL is a cinematic onslaught against the ideology espousing terror, and propagates a liberal interpretation of Islam. Add to it a star cast, the music, and the breathtaking cinematography. As Pakistan TV artist Suhail Asghar points out, "The future will prove Naseer's role in KKL to be one of his most memorable." At Gulistan College, student Sameera is chilling out with her gang in the interval. "This movie has all the ingredients," she gushes, "the genius of Shoaib Mansoor, the amazing acting skills of Naseeruddin Shah, the popularity of Shan and the beauty of Iman Ali, who's the current rage in the industry. What more could you ask for?"