Tales A Na-Phing Can Tell

A culture saturated with patriarchy, identities strapped in curfews and ceasefires—a Northeast anthology on women collates motifs and realities 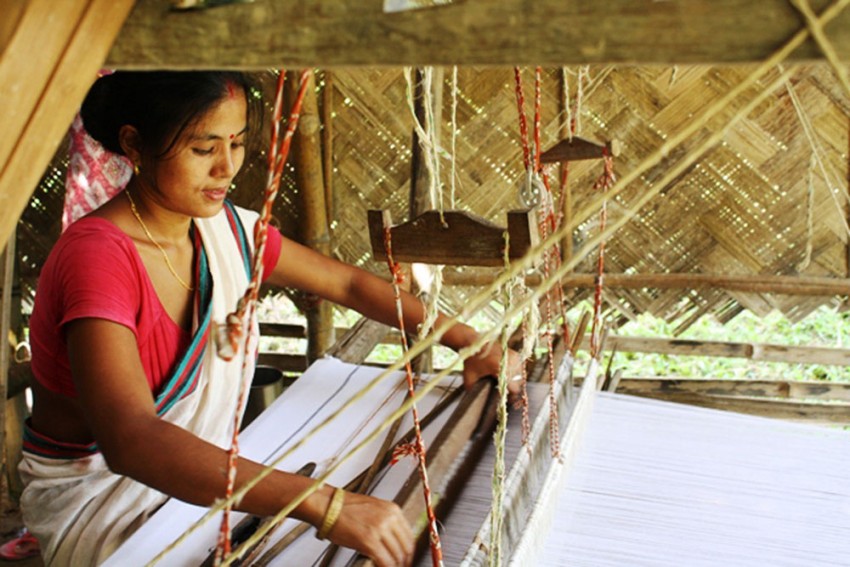 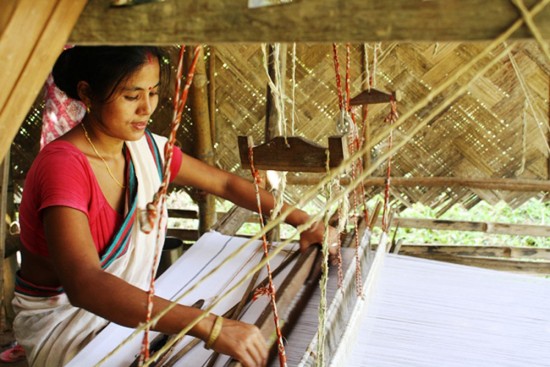 It’s a powerful, telling image. Str­ands of milky thread squirt out from the breasts of a woman as she knits. Weaving perhaps her own weary tale, intertwined with the troubled histories of her land and people. This self-portrait by Kundo Yumnam on the last page of this anthology encapsulates the spirit of this Zubaan publication. It works at many levels, giving us insights into the daily conflicts and reconciliations that a woman negotiates within her many realms: her self, at home, at work and vis-a-vis the state.

Edited by Parismita Singh, the anthology collates diverse perspectives and positions, memories and motifs to convey the idea of women at work in the Northeast. Through visual and word for­mats, this aesthetic is explored thro­ugh stories, poems, essays and art works.

The book begins with an interesting visual: Zubeni Lotha’s untitled photograph of two women in combat uniform wearing hornbill headgear. What does it tell us? Of the polarities of traditions and marginalised, militarised lives? There are no easy answers when it comes to the Northeast, for the term is a homogenised description of diverse communities. Some works here attempt to make sense of these dichotomies.

Aheli Moitra’s essay Naga Naki is an insightful insider-outsider perspective on life as a journalist in Dimapur, besi­des offering a sensitive reading of the Naga conflict. Aungmakhai Chak’s photos att­empt to subvert the established iconography for indigenous women. So you see a woman carrying an earthen jar on her shoulder, a typical male projection of physical strength as opposed to women who are seen carrying jars on their waists. She also describes the ‘mainstreaming’ of the Na-phing, a skirt-like outfit, which was short in her grandmother’s time, but doubled in length in her mother’s time. This was done to remove the tag of backwardness associated with it. Today, to wear the Na-phing is to invite ridicule from the ‘dominant’ society. Yet, whenever there is an occasion to ‘perform as indigenous’, the ‘dominant’ society dema­nds that the Na-phing be worn.

This cultural and patriarchal conditioning is well articulated in the poetry. There is a half written poem/ There is a bawling baby on the bed (Curfew by Soibam Haripriya) or I make my rhythm/ From the pounding of paddy/ The winnowing of rice/ And the cries of my baby/ You come, listen to my lullabies/ And compose your PhD (#hashtagpoetry by Thingnam Anjulika Samom). The short stories Women’s Literature and Chitro of the Dung Buckets speak the language of the working woman: wry, deadpan, with the right sauciness of humour.

Weaving, as an art, trope and identity, runs as a strand in many works. In Mamang Desai’s story it takes an almost magical expression of a mother’s blessing for her son.

For a generation whose lives are strapped between curfews and ceasefires, the idea of identity, tradition, home and belonging accrue greater relevance. The separation pangs of a migr­ating generation is beautifully captured in Alyen Foning’s textile art narrative, inspired by her Lepcha heritage. Wea­ving, as an art, trope and identity, runs as a strand in many of the works: in the Daksare Sketches by the Bumbum Design Studio, in the retelling of folktales by Jacqueline Zote, where woman as free spirit exists only in fantasyland, in Mamang Desai’s story, where weaving takes an almost magical expression of a mother’s blessings for her son.

The question of identity is explored in the docu-photo project by Prashansa Gurung. The subject is Josie Marie, a makeup artist from Aizawl, but settled in Goa. Dolly Kikon’s Women at Work analyses the violent movement of 2016-17 against the 33 per cent reservation for women in municipal elections. Pro-rese­rvationists were seen as anti-Naga simply because the traditional tribal organisations and customary courts had always excluded women’s participation. The protests nevertheless ignited a much needed debate on gender politics. Gert­rude Lamare’s piece on the women haw­kers of Shillong examines the challenges they face, of being pitted against patriarchal dominance of public spaces and state machinery. Of how the gentrification of the city is eroding the organic element of public space. The eviction of the hawkers led to a grassroots movement to reclaim their space, not just on the streets but also in the economic and social spheres.

A similar sisterhood of labour is det­ailed in Rini Barnan’s essay on women who brew traditional liquor. Brewing requires immense patience and toil, but is  seldom recognised as an economic activity. Thro­ugh conversations with tribal women brewers across Assam, Barman underli­nes their invisible contribution. The Cen­t­repiece isn’t without faults though. Some of the contributions seem too facile or too weighty. But as a whole, the non-­linear architecture of the book, with its visual-word interplay, makes it a refreshing addition to anthologies on the Northeast.

This Song Is Our Song