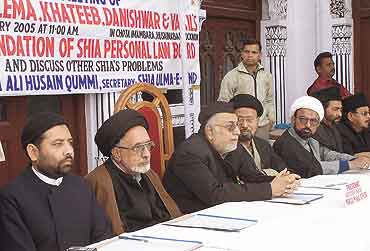 outlookindia.com
-0001-11-30T00:00:00+0553
"Our community is not identified with any fundamentalist group. Have you ever seen a Shia terrorist? All terrorists are supported by these Wahabis (Deobandis)."
—Yasoob Abbas, founder-member of the newly-launched All India Shia Personal Law Board (AISPLB).

"Why should we Shias get identified with people who hold retarded views on important issues concerning the community?"
Yasoob Abbas, Founder member, AISPLB

"AIMPLB has lost all credibility as its two main components have separated. We are the new board now. We were feeling suffocated earlier."
Maulana Tauqir Raza Khan Barelvi leader, AIMPLB (JADID)

"All they want is cheap publicity. They don't have any credibility. These are efforts to divide the community and they won't succeed."
Maulana Mehmood Madani member, AIMPLB

Abbas' is not a lone voice. The dissenters among two prominent Muslim sects and sub-groups are becoming shriller. The divide among Muslims on issues ranging from triple talaq to family planning is finally out in the open. The authority of the All India Muslim Personal Law Board (AIMPLB) is being questioned like never before.

Sharp differences among the various sects have resulted in two dominant minority groups—the Shias and Barelvis—forming their own separate personal law boards. And if the trading of charges and labelling each other "kafirs" (non-believers) is any sign, Indian Muslims are no longer united or of one brotherhood.

A section of the Shias have challenged the authority of AIMPLB, the most widely-known representative body of the Muslims. At a meeting in Lucknow last week, Maulana Mirza Mohammed Athar, an academic linked to Shia College, Lucknow, announced the formation of the AISPLB. This after the AIMPLB had already been publicly humiliated by Maulana Mohammad Tauqir Raza Khan, great-grandson of the Barelvi sect founder Maulana Ali Shah Mufti Ahmad Raza Khan, forming a parallel board for Barelvis last month.

Tension has been simmering in the community since July. That's when the AIMPLB debated the issues of scrapping the triple talaq system, introducing a model nikahnama (a marriage contract) and a new talaqnama. While the Barelvi ulemas threatened an agitation against the abolition of triple talaq, the Shias asserted that they never practiced triple talaq anyway.

The founder-members of the new Shia board claim they were treated "shabbily" by the AIMPLB which, they said, was full of Deobandis who enforced their views on the whole community. Asks Yasoob Abbas, general secretary of the Shia National Front: "Why should we be identified with people who hold retarded views on important issues concerning the community? We follow rational practices on issues like divorce, family planning, etc."

The president of the new Shia board, Maulana Mirza Mohammad Athar, maintains that Shias felt "suffocated" in the AIMPLB. "We have different personal laws. Our mosques, graveyards and madrassas are different. Why should we be confused with people who believe in triple talaq and oppose family planning? The fact is that the Shias have been totally neglected. Despite being the most prominent minority group, we have absolutely no representation in Parliament. Even in UP, with a sizeable Shia population, we don't have a single Shia minister. What has the AIMPLB done for us?" asks Mohammad Athar.

On the other side, the Barelvis, often dismissed by the Deobandis as "grave-worshippers" on account of their tolerance of Sufi mazaars, assert that the AIMPLB has lost all credibility post-split. "We are the new board now. We are now called the AIMPLB (Jadid). We were feeling suffocated in the earlier set-up," asserts Maulana Mohammad Tauqir Raza Khan, president of the Barelvi board.

The AIMPLB, however, plays it all down. "All they want is cheap publicity. These people don't have any standing in the community.They have no credibility. All these are efforts to divide the community and I promise you they won't succeed," says Maulana Mehmood Madani of the Jamiat-e-Ulema-e-Hind, a prominent AIMPLB member. There was also talk of internal Shia dissension and hints of saffron backing being behind the split.

The warring groups and their public dissensions do not surprise Islamic scholars. "It was bound to happen. As long as the AIMPLB was not forced to address changes in the personal law, it was fine for everyone.But now that women and progressive elements are demanding that retrogressive practices be abolished, various groups have rushed to strengthen their spheres of influence," says academic and civil-rights activist Asghar Ali Engineer who helped draft AIMPLB's model nikahnama.

According to Dr Engineer, the Barelvi ulema consider the model nikahnama an interference in the Sharia. When the AIMPLB started discussing the issue, the Barelvis revolted; while the Shias felt hurt when the Board dismissed Dr Kalbe Sadiq's support of family planning. According to Shikoh Azad of the Awadh Royal Family Association, who has worked for the Shia board's formation, AIMPLB is a "repressive" body. "Why are Shias not represented adequately in it? Our voice is not heard. Since Hazrat Ali's time, we have followed different personal laws. We do not have to be bulldozed by other people," Azad told Outlook.

While some clerics dismiss the recent developments as a "conspiracy" to create artificial divides, there is no denying that various groups and sub-groups among Muslims have started asserting their individual character. On a more positive side, the openly dissenting groups may finally erase the stereotype of Muslims as a monolithic, homogeneous community.