Taking It Beyond Wazwaan

To the PDP, the ex-IB chief’s appointment as interlocutor is a chance to reconnect with the people. But the mainstream opposition and the separatists are not enthused. 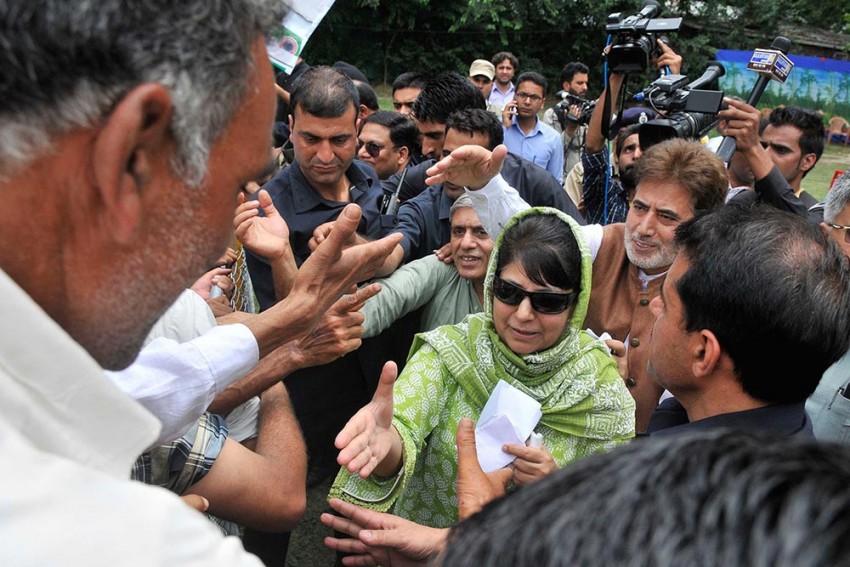 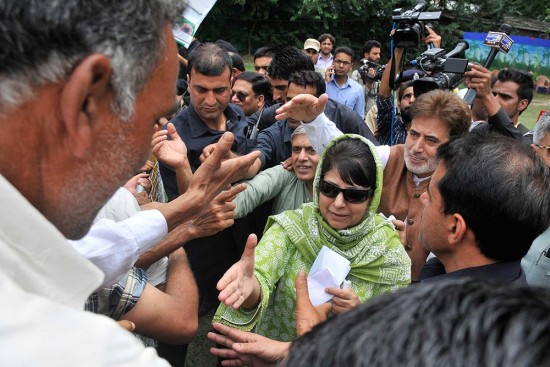 Wazwaan, a multi-course Kashmiri traditional meal, also known as the king’s feast, is served at marriage functions, family gatherings and religious and social events in the Valley. Political parties too throw Wazwaan feasts and the ruling People’s Democratic Party (PDP) is quite particular about it. Once a year, the PDP hosts a Wazwaan feast for journalists. Faced with bad press for the past one year over its handling of protests, the media-savvy party had been keeping the media at arm’s length. That changed after October 23, when the Centre announced the appointment of former Intelligence Bureau chief Dineshwar Sharma as its interlocutor in Kashmir.

The PDP has welcomed the appointment as the first step by the Centre towards implementation of the Agenda of Alliance (AoA) the party had drawn up with the BJP, its ally in Jammu and Kashmir. As the PDP is facing a credibility crisis over this alliance, the party finds a ray of hope in the Centre’s initiative.

Elated party president and chief minister Mehbooba Mufti hosted journalists at her Fair View residence on Sunday, October 29. Wazwaan was served, but there was no press release or statement from the CM. Instead the guests were given little bags to take away what they couldn’t eat. PDP leaders believe that the Centre’s move has given them an opportunity to reconnect with the people and the party started the process with scribes. A day after the Wazwaan feast, PDP chief spokesperson and cabinet minister Naeem Akhtar attended the BJP’s working committee meeting.

Away from the Wazwaan din at the CM’s residence and the euphoria in the PDP, the separatist leaders didn’t show any inclination to respond to the Centre’s initiative. The government appointed the interlocutor at a time when the law and order situation in the Valley is under control, with almost no stone-throwing incidents. Also, “pro-India” parties such as the National Conference (NC) are now able to hold rallies in which thousands participate. The thrust in these rallies is on restoration of J&K’s autonomy, which is perceived to have been eroded over the years. The CM too is visiting various district headquarters and holding public durbars to reconnect with the people.

This year, development activities across the Valley, such as blacktopping of roads and other infrastructural work, didn’t face any hindrance. Home Minister Rajnath Singh met around 55 delegations during his visit to the Valley in early September. A week after Rajnath’s visit, former PM Manmohan Singh held deliberations with a cross-section of people in Srinagar and met 36 delegations. 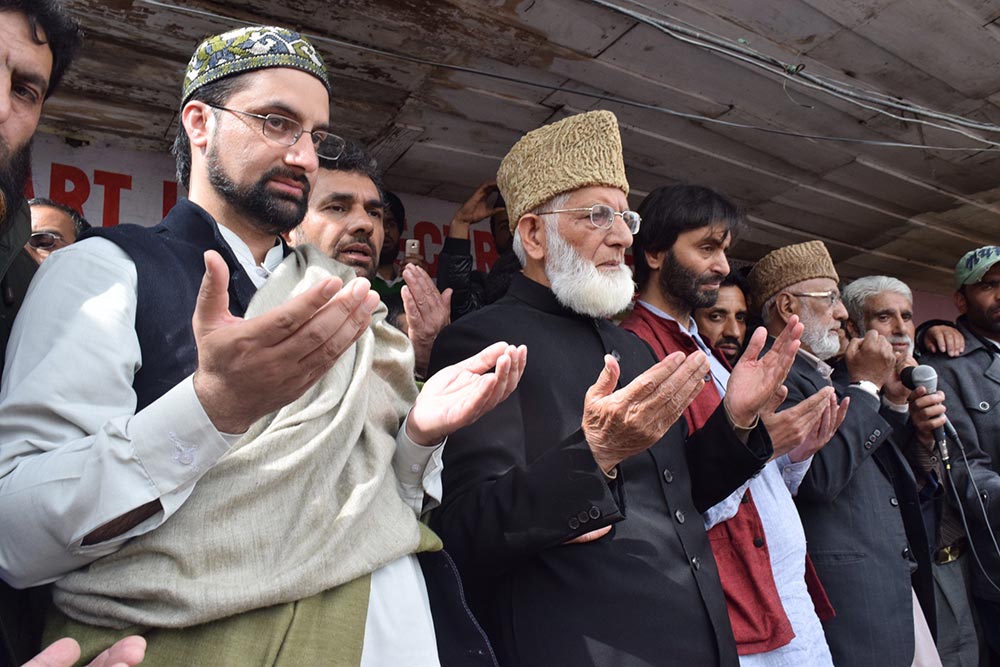 Mirwaiz, Geelani and Yasin Malik have called the Centre’s ­initiative a “tactic to buy time”

Intelligence sources say around 180 militants have been killed since January, highest in the decade, while raids and arrests by the National Investigating Agency (NIA) have forced the separatist to be on the defensive, enabling Sharma to enter the field from a position of strength. Many in the security establishment, however, argue that military operations are no alternative to talks as local recruitment has gone up, and around 95 youths have picked up arms—also the highest in this decade. NC president Omar Abdullah sees the spurt in militant recruitment as a reason for the appointment of an interlocutor.

According to intelligence sources, infiltration from across the border has given a new lease of life to the militants operating in North Kashmir. In two operations in October in the region, two IAF Garud commandos and a personnel of the Special Operations Group (SOG) of the J&K Police were killed by the militants during two separate encounters in Hajin area of north Kashmir. Hajin was once a hotbed of counter-insurgents such as the Ikhwaan, comprising surrendered militants.

This year, 67 government forces personnel, including 29 pol­icemen, have been killed by militants so far. The figure is the highest ever for the J&K Police in the past two ­decades. Moreover, the Jaish-e-Muhammad, a militant org­anisation known for fidayeen or suicide attacks, is reviving itself in the Valley.

It was in this backdrop that Sharma has been appointed interlocutor. “The Modi government’s focus all these years had been on Kashmir as a security problem,” says CPI(M) state secretary and MLA Mohammad Yusuf Tarigami, who believes the Hurriyat Conference should talk with Sharma. “The interlocutor’s appointment shows that Kashmir is a political problem that needs resolution.”

According to Tarigami, the appointment, coinciding with US Secretary of State Rex W. Tillerson’s visit to New Delhi, suggests American prodding and pressure from other parties in the country have forced present government to start the dialogue process.

“New Delhi seems to have ­appointed the ­interlocutor under pressure from the US, and then made sure he should not talk to anyone,” says Shujaat Bukhari.

Syed Shujaat Bukhari, a well-known Kashmir analyst, says the initiative has been duly acknowledged in the Valley, proving that Kashmiris have always been for dialogue. But, just like previous such exercises, this too was killed by New Delhi, he claims, adding that the “only difference this time is that the interlocutor was himself more than keen to kill his mission”, as evident from “his wrong analogies comparing Kashmir with Syria”. “Conflicting voices in the BJP ended the dialogue process,” says Bukhari. “New Delhi seems to have appointed the interlocutor under US pressure, and then made sure he shouldn’t talk to anyone.”

Political secretary to Omar Abdullah, Tanvir Sadiq, echoes Bukhari’s views. “From day one, the Centre wanted the initiative to be rejected. When you say you will not even discuss autonomy, and that the interlocutor is just a representative, why would anyone talk to you?” asks Sadiq, alluding to PM Narendra Modi’s speech on October 29.  That day,the PM, referring to former home minister P. Chidambaram’s advocacy of autonomy for J&K, described such talk as “lending voice to Kashmir’s azadi...in the language of Kashmiri separatists and Pakistan”. Calling it “shocking”, Sadiq informs that the NC will decide about talks with Sharma once it gets an invitation.

Congress state president G.A. Mir also says the Centre and the state government should identify the real stakeholders to make the process more clear. “The Congress is all for dialogue. But the Centre and the interlocutor should show a roadmap first,” says Mir.

As Sharma’s appointment follows what the PM had said in his Independence Day speech this year—“Na goli se na gali se, baat banegi Kashmiriyon ko gale ­lagane se”—the PDP had hoped the interlocutor would help in creating an atmosphere for dialogue on substantive issues. The party is optimistic even after separatist leaders rejected dialogue with Sharma and the PM’s recent reference to Chidambaram.

PDP chief spokesperson Akhtar says the Hurriyat must talk. “Most of them have participated in the talks with the Centre in the past and everybody believes that a solution can be found through talks,” he says. “The Centre has made the talks unconditional; the Hurriyat too can do so.” The CM has also appealed to separatist leaders to come forward to talk “if they are sincere about peace in J&K”, addas Akhtar.

The separatists, though, are in no mood to have a feast with Sharma. On Tuesday, Syed Ali Geelani, Mirwaiz Umer Farooq and Muhammad Yasin Malik—the “joint resistance leadership” (JRL), as they call it, forged during the protests last year—­announced they won’t talk to Sharma. 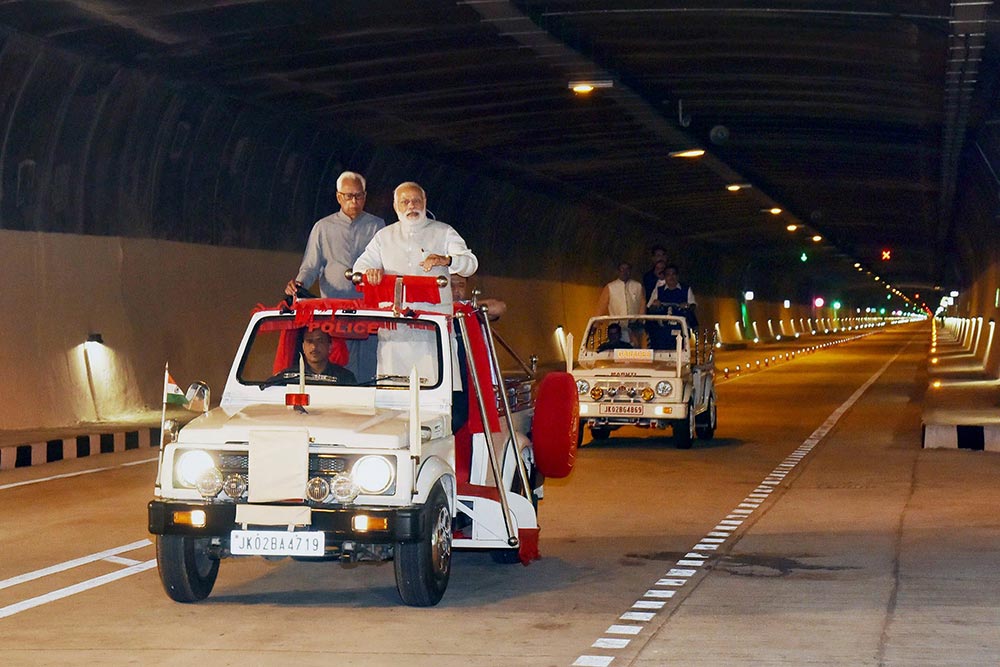 The JRL described Sharma’s appointment as a “tactic to buy time”, and alleged that his assertions were “misleading” and limited the “scope of any engagement”—ref­erring in particular to his description of his mission as dissuading “the youth from Islam and pursuing their legitimate political aspirations so that Kashmir does not become Syria” is “misleading”. The separatist leaders said the comparison between Kashmir and Syria “is deception and propaganda as there is no correlation”.

The separatists, however, have kept a window open while saying they have “always advocated and supported a sincere and productive dialogue as a means of conflict resolution”. “What it inherently entails from all participants is the basic ack­nowledgment that there is a dispute that has to be resolved. But the government of India continuously refuses to accept this basic premise,” they said.

Former Hurriyat chairman Abdul Gani Bhat, who has always advocated dialogue, has said there should be talks between India and Pakistan, which would produce a change in Kashmir and the region as a whole. “In 2004, we started talking to then PM Atal Behari Vajpayee as India was talking to Pakistan and we seemed close to some solution. Talking for the sake of talking wouldn’t help at all,” Bhat tells Outlook. “I don’t have any hesitation in talking. I am blessed with a tongue and I can talk. But why should I waste time if you have no vision and purpose for engaging in talks?”

In 2004, Bhat was part of the two rounds of the dialogue between the Mirwaiz-led Hurriyat and the Vajpayee-led NDA government in New Delhi on January 22 and March 27. Another round of dialogue was held with then PM Manmohan Singh on September 5, 2005. But this time, both moderates and hardliners in the separatist camp are on the same page, brought together by the fear that the government wants to lower their bar by forcing them to have a dialogue with an interlocutor who sees the Kashmir conflict as one of Islamic radicalisation.

“It is a difficult moment for us,” says a separatist leader requesting anonymity. “The Centre appointed the interlocutor even as the army chief announced the army would continue its work as usual, the NIA raids persist and the state government introduced an ordinance that makes even a non-violent strike call an offence punishable with sentences up to five years. This is not how a positive atmosphere for negotiations looks like.”

Omar Abdullah has asked what the int­erlocutor would talk about if talking about internal autonomy is treason. “If he is coming to enjoy good weather and Waz­waan, who can stop him,” he said sarcastically. Now the ball is in Sharma’s court to take his initiative beyond Wazwaan.

Law and order is under control, with few incidents of stone-pelting

Militant recruitment has gone up; 95 youths have joined militancy so far this year, mostly from south Kashmir