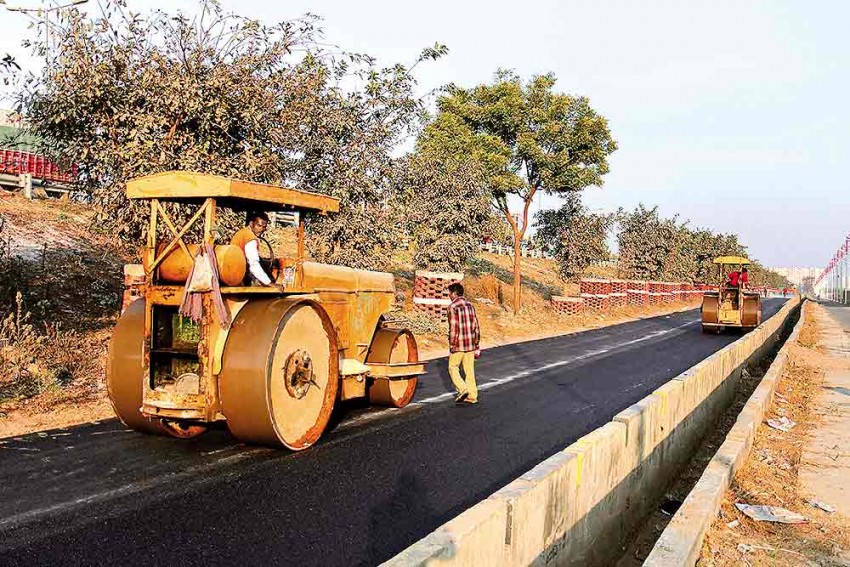 Rolled Out
Roads being laid on the outskirts of Lucknow
Photograph by Naeem Ansari
Pragya Singh February 02, 2018 00:00 IST Take Me Home, Country Roads 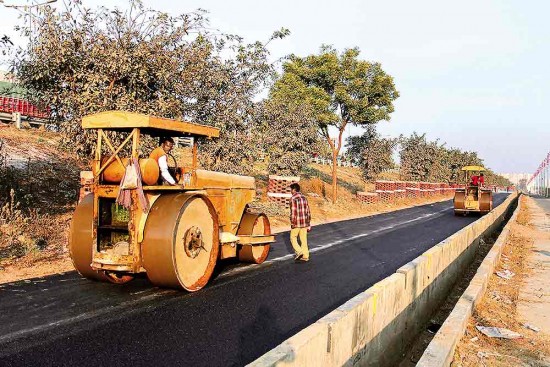 Budget 2018-19 lives up to its buzz—overall spending on “rural infrastructure and livelihood” will cross Rs 14 trillion, FM Arun Jaitley said in his speech. While details will emerge later, the government has clearly provided for the biggest leaps in funding for schemes that direc­tly cater to rural development and employment. It plans to build 51 lakh new rural houses in the next year, construct 1.88 crore toilets and provide 1.75 crore new electricity connections. With this massive allocation spanning ministries, departments and a variety of schemes, the gap between rural development, infrastructure-building and agriculture as separate heads of government expenditure is narrowing.

The National Rural Employment Guarantee Act (NREGA) and Pradhan Mantri Awas Yojana (PMAY) have got some of their biggest hikes ever—14.5 per cent and 13.5 per cent respectively. NREGA will get Rs 55,000 crore—Rs 7,000 crore more than last year. For the PMAY, under which homes are built for the poor, the government plans to raise Rs 12,000 crore of the overall allocation of Rs 33,000 crore from extra-budgetary resources. This means state and central government resources (PSU profits, interest income etc.) will to an extent determine the funds available. The demand-driven NREGA will get allocations from the Budget itself.

This is in sync with heightened ­demand for work under NREGA in rural areas last year, when expenditure on it grew to 25 per cent over allocation. As the consequences of demonetisation wane, this year’s hike is expected to cater to most of the demand growth and keep rural distress at bay. Keeping the effect of droughts and other factors in mind—such as the electoral promise of housing for all by 2022—NREGA and PMAY remain mainstays of the government’s rural push as the country looks at ­elections in the near future.

The “Rs 14.34 trillion” windfall will also include existing and new schemes for employment generation, irrigation, housing, sanitation, livelihood, electrification and other farm-based and rural projects by ministries and departments at the Centre and in states. It is not a completely rosy picture, as there have been droughts, and farmers have failed to realise prices for crops several times over the last two years.

“This year’s food subsidy bill is almost Rs 30,000 crore higher than the ­previous year’s, although food prices are ­lower. This gives some indication of the situation in rural areas and the kind of development that is needed,” says farm leader Ajay Vir Jakhar.

“The government has allocated its available resources the best it could. Even the finance minister’s hands are tied as a result of many years of econo­mic mismanagement,” says Jakhar. “The massive allocation for rural development combined with the massive scheme for medical insurance for the poor will provide a big relief to rural India, where medical costs have been tearing families apart,” he says.

The thrust is on wages, infrastructure and ­logistics. 3.17 lakh km of rural roads will be built, and there are ­allocations for ­agricultural logistics.

Experts have been reiterating that the rural economy is in need of support, and this Budget is an effort to address this. The thrust, even as the FM declared that GDP had crossed $2.5 trillion, was on ­rural wages and improving small farmers’ access to markets by building logistics near panchayats. Accordingly, 22,000 rural haats (wee­kly markets) and ‘Operation Green’ for agriculture logistics have got modest allocations of Rs 2,000 crore and Rs 500 crore ­respectively. Farmer-producer ­organisations (FPOs)—collectives of small and marginal farmers (who own less than 5 acres )—will be exempt from income tax as well. The biggest effort, however, is to link village and rural roads to these new haats, villages and FPOs.