Take 2: Knickers In A Twist 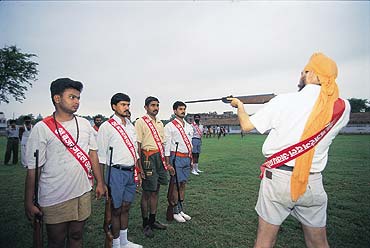 The Malegaon blasts has confounded intelligence agencies too. They were quick to declare the July 11 Mumbai train blasts as being the handiwork of a Pakistan-based terror group assisted by local Students Islamic Movement of India (SIMI) activists. But, on Malegaon, they've been unusually quiet about attributing blame. Central intelligence agencies say they are not ruling out any possibility—including the involvement of Hindu groups. However, lack of evidence means they aren't pointing fingers.

Still, which Hindu groups are militant and active now? Says Ajay Sahni of the Institute for Conflict Management: "Right-wing organisations have been inciting violence and incidents of a communal nature for quite some time. Whether to describe them as terror acts is the question. The word terrorism will have to be defined again, and then most incidents will come in its ambit."

Listed below are some of the more active extremist Hindu groups today: