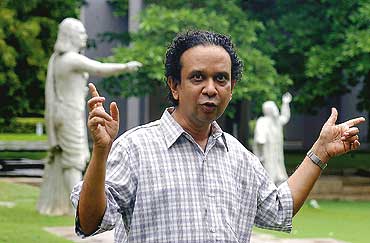 outlookindia.com
-0001-11-30T00:00:00+0553
How did the universe originate? What drives its expansion? What is the final stage of a collapsing black hole or the strong gravity region resulting from a star’s collapse? These questions are the essence of life for Padmanabhan, Dean of Core Academic Programmes at Pune’s Inter University Centre for Astronomy and Astrophysics. "Nearly 70 per cent of the universe consists of exotic matter called dark energy which exerts negative pressure. I am trying to evolve a sensible scientific model to understand its origin and its role in the genesis of the universe, galaxies and other larger structures."

To unravel these mysteries, Padmanabhan has to marry quantum mechanics—matter existing as both particle and wave—with Einstein’s general theory of relativity about the vagaries of space-time. "For want of a successful model marrying these theories, quantum gravity remains the leading problem in theoretical physics and requires a different approach," says Padmanabhan, whose approach to quantum gravity deals with space-time like condensed matter physicists deal with solids. "Take a seemingly smooth continuous solid. To obtain its correct quantum theory, we must deal with the atoms it is made of and the empty space inside. Similarly, we need to understand the ‘atoms’ in the microstructure of space-time and apply the principles of quantum theory to it. I’m dealing with the unappreciated, unexplained aspects of Einstein’s theory. A successful theory of quantum gravity will revolutionise the way we look at space and time."