IT majors sulk as Bangalore 'falls off' the state's map 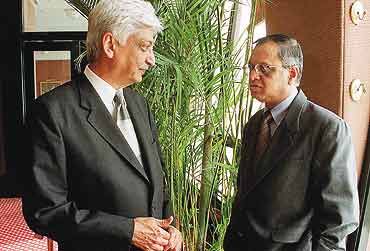 For some time now, a public debate has been simmering in the air, sort of pitching Bangalore against the rest of the state. At a time when 'Bangalored' has become a new transitive verb in the US (suggesting a job lost to outsourcing), the rest of Karnataka has been asking if they have not been dunked the same way. The argument is there's an excessive focus on the capital city and the IT sector—which has got further polarised after the new Congress-JD(S) government was installed some two months ago. It was fairly clear that the new dispensation, at least the dominant JD(S) partner, does not subscribe to the Krishna regime's "dream" of turning Bangalore into a Singapore.

Predictably, the new focus away from the capital has not gone down well with the IT companies. The new budget presented on July 19 had no Bangalore musings, there were no special funds allocated for development of the city's infrastructure, and to rub it in sales tax on IT products has been hiked from 5 per cent to 12 per cent. The new budget with an added tax on luxury items comes as a bodyblow to the "upwardly mobile". And now the English language press has joined battle, running front-page campaigns against the new government.

The first big reaction to the state budget and a statement that's added impetus to the city vs the state debate came on July 23 at a Wipro press conference to announce its quarterly results. Chairman Azim Premji was present when it was made known that Wipro would "expand outside of Bangalore rapidly". Vice-chairman Vivek Paul assigned reasons and Bangalore's lack of infrastructure was a key issue: "We haven't seen any material improvement in the last five years and now we have a declared intent of not to improve it for the next five years too." The "declared intent" was a direct reference to the budget.

Infosys soon joined the chorus. Addressing a felicitation meeting in the state legislature, N.R. Narayana Murthy's innocuous statement that "the industry and the government can work together for a better Bangalore" had a subtext. The previous Krishna government had worked hard for this through the Bangalore Agenda Task Force (BATF), headed by Infosys CEO Nandan Nilekani and having, besides others, high-profile wives of IT bigwigs. The new government has quietly refused to renew the BATF's term. Within a couple of days of Murthy's statement, the issue of the three-year-old Bellandur land allotment to Infosys' new Rs 1,000-crore campus resurfaced. It was rumoured the government's 'reluctance' to allot land had the company thinking beyond Bangalore.

The official position is clear. A senior official in the CM's office said chief minister Dharam Singh personally assured the IT industry that he wasn't against them, but his government's current priority was the farm sector. "The reason is the 696 farmer suicides reported in the state and the four years of drought. People across Karnataka will react angrily if we don't address their plight. There is life beyond Bangalore and a popularly elected government cannot ignore it." Deputy CM and finance minister Siddaramaiah's reaction from Mysore was more direct: "Let me know who has gone out of our state. It's just a threat. They want to start moving out within four days of my presenting the budget? Facilities provided to IT investors here are the best in the country...they will remain in congenial Karnataka," he declared.

Political commentators, though, feel the government should make a little more effort to improve its static, lazy-guy image. It must be seen to be addressing development issues and not just the scams that have surfaced since its inception. A senior JD(S) leader contends that the difficulties (rice scam, wheat scam, new twists in the stamp paper scam, ransom for Raj Kumar's release, Naxal menace, huge irregularities in land allotments, the professional colleges admission imbroglio etc) that the new government has had to tackle in its short existence is the legacy of a regime that was perceived to be "dynamic". Perhaps then, a little static is good.