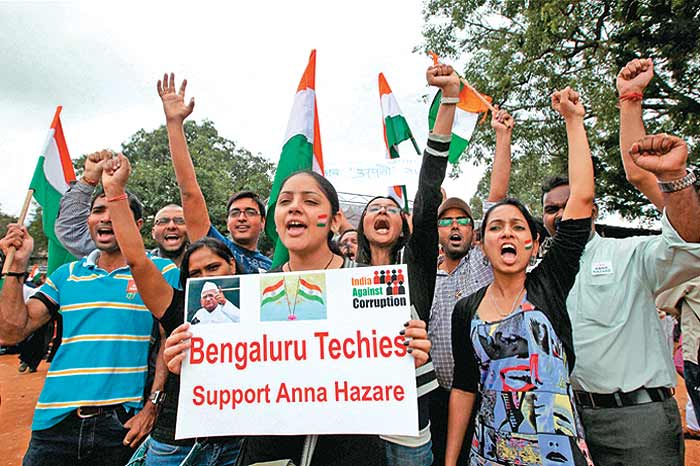 On August 22, a public holiday across north India, Sunil Sirohi, a middle-aged IT executive, joined Ramlila Maidan’s anti-corruption agitators with wife Jyoti and a pre-teen son. “It’s the first such movement we’ve been part of,” he says. One of the attractions was bringing young Siddhartha up-to-date on Anna Hazare, the self-styled Gandhian from Maharashtra who has become the public face of a ‘civil society’ demand for a strong anti-corruption body.

Anna’s cry against corruption has pulled wealthy Indians out of their condos and into the streets and poorly sanitised, muddy pandals. Industry veterans have spoken in his support, and associations have backed him. Urban professionals are out in full strength, and so is an emerging workforce of college students.

“It’s the first time this section is not being cynical and putting faith in changing a corrupt system democratically,” says businessman-politician Capt R. Gopinath. On Wednesday, Gopinath helped organise an anti-corruption march in Bangalore—a 17-km-long human chain of voluntary participants marched from morning to late afternoon. “Unlike political rallies, no `500 bribe was paid to get the poor to come, nor was anyone tempted by free biriyani,” he says.

“Professionals who have spent money bribing for water, electricity etc can hardly be the voice against corruption.”
Barun Mitra, Liberty Institute

For businessmen, the movement is a chance to vent dissatisfaction with a system that (many would say) actually works to their advantage: a bribe simply gets thrown in with all their other qualifications, elevating their chances of beating a competitor. “India is the only country of its size where the share of manufacturing is reducing, not increasing, over time. That’s because of how difficult it is to do business here. And to do so honestly, virtually impossible,” says Anil Bharadwaj of FISME, an association representing small firms, which threw its weight behind the Anna campaign.

A criticism of the protest is that it trains guns on corrupt governments, therefore letting off the ‘corporate sector’—a common alias for big business since December 2008. That year, IT success story Satyam turned out to be little more than an accounting trick. Scandals have been unfolding ever since, with the CAG reporting cost escalations, delays and favouritism in CWG contracts and spectrum allocations; illegal mining has caused a furore and land acquisition by industry has led to violence.

Kiran Mazumdar Shaw, CMD, Biocon, warns against misunderstanding the movement—mega scams are not the issue, nor is Hazare a panacea. “The issue is common people across the country asking why they must bribe, when they pay taxes and follow the law.” It’s a question the government will ultimately have to answer, she says, no matter how much they resist.

If Anna’s supporters refocus attention on crimes that implicate companies, would corporate support for the anti-corruption drive wither? FICCI’s Dr Rajiv Kumar feels this criticism is misplaced. “First, the movement is not driven by corporate support. And if attention does turn to corruption in business practices, so be it,” he says. He says there’s a tendency to tar all businessmen with the same brush, whereas only a tiny percentage is actually implicated in scams.

Critics say Hazare’s movement epitomises something typical of India: the agitation means different things to various segments, and nobody knows where it will ultimately end up. “Professionals who have spent money bribing officials for water, electricity or construction permits can hardly be the voice against corruption,” avers Barun Mitra, who heads the Liberty Institute in India. As an emboldened civil society intensifies its war, a bigger net will be thrown around. And big business could find to its discomfort that it is seen as part of the problem—and not a victim.