Sympathy For The Devil

The saffron family joins in the national outrage at US hegemony, comes out in support of Saddam 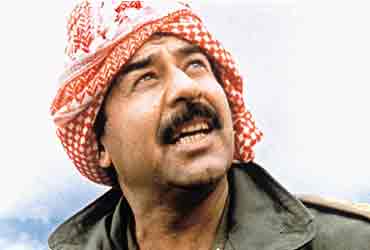 outlookindia.com
-0001-11-30T00:00:00+0553
RSS spokesperson Ram Madhav has this interesting tale to tell. Recently a journalist from a leading American daily visited the Sangh office in Delhi's Jhandewalan. The correspondent had presumed the Sangh would be as supportive of the US invasion of Iraq as it was of the action against the Taliban in Afghanistan after 9/11. Ram Madhav laughs as he recalls, "I asked him, 'Do you expect us to support this war just because Saddam is a Muslim and Iraq a Muslim nation?' We are never opposed to Muslims per se. It is jehadi terrorism we oppose. The US has not been able to convince the world that Iraq has any links to terrorism."

So, in a big departure from its post-9/11 stand, the RSS has strongly condemned the Anglo-American action. As has the bjp and even some vhp leaders. The sole discordant note was struck by the vhp's Praveen Togadia who suggested a month ago that India should support the US. Since then, Togadia has retracted his statement and told RSS leaders that he had been misled. Says RSS ideologue Devendra Swarup: "At the people's level, there is complete opposition to the war. All of us are watching helplessly as one superpower imposes its will on the world. No one in the Sangh can support what is happening."

The Sangh's position has surprised many political observers, most of whom see the Hindutva forces as being anti-Muslim at any cost, subscribing to the clash of civilisations theory. The Hindutva theologists, they argue, had been instrumental in whipping up anti-Muslim sentiment after 9/11 and the December 13 attack on the Indian Parliament, making it possible for Narendra Modi to run an entire campaign painting Muslims as potential terrorists.

So why has the RSS responded differently to this war? For one, sarsanghchalak K.S. Sudershan laid down the line some weeks ago when he said the US was being a hypocrite vis-a-vis Iraq. "If they want to fight terrorism, they should look at Pakistan which is the epicentre of terrorism. Why Iraq, which has no proven links to international terrorism?" Many RSS thinkers are also bitter at the way the US continues to prop up the Musharraf regime in Pakistan, when they believe India should have been the natural ally in the war against terror.

The mood of the RSS cadre, which is fiercely anti-US, has also been a factor. As Ram Madhav says, "We don't see this war at all from a communal or Muslim perspective. If anything, Hindus have been protesting more than Muslims against the war." Ironically, this is one of the rare instances when the views of Syed Shahabuddin, editor, Muslim India, dovetails with those of the RSS spokesman. Says Shahabuddin: "I don't see any communal fallout of this war in India. Muslims feel no differently from the common Indian—that this is an act of aggression by an imperialist power against a small nation to grab its resources."

Dinanath Mishra, bjp MP and ex-editor of RSS mouthpiece Panchajanya, expands on the parivar's outrage. "This is completely different from the attack on the Taliban and bin Laden. Despite the smart media management, George Bush has become the most unpopular leader in the world today, while Saddam, the despot, is in the process of becoming an Islamic hero and getting sympathy from even outside the Islamic world." Like other RSS thinkers, he is worried that the concept of sovereignty of nations has been undermined. "This is jungle raj where might is right. Tomorrow they may want to change regimes in Iran, Libya. It is not far-fetched to imagine that if this goes on, some day they may talk down to India and dictate terms."

Devendra Swarup says what this war has proven is that the world worships brute power. "All the talk of human rights and international law has been rendered meaningless. What we are seeing is the naked imposition of military might.It's inevitable that the rest of the world watches with horror." But though voices from the Sangh strongly condemn it, they also support the Indian government's reluctance to directly come out and attack US policy in Iraq. As Ram Madhav says, "Organisations can say what they want. But the government must play safe, it has to safeguard future Indian interests. Why should India stick its neck out and take on the US when we are not direct players?"

Still, there is a section in the RSS not wholly opposed to the idea of pre-emptive strikes against a hostile nation. Says Seshadri Chari, editor of RSS mouthpiece Organiser: "I do not support the US action but at the same time I believe a nation has a right to act if it perceives a threat to its security. What is worrying is that the US has not been able to build a convincing case...." Clearly, like many Indians, the Sangh too is viewing the US action through the prism of Pakistan. The incantation in the parivar is why Iraq when even the Pakistani president now says that Osama bin Laden may be in that country? There is also an ideological strand in the Sangh which sees the US, Israel and India as natural ideological allies fighting a common foe—the Islamic terrorists.

A more vocal section in the parivar has been virulently anti-US for decades now. This is the swadeshi brigade led by Dattopant Thengadi, who this week accused the US of "adding military terrorism to its policy of economic terrorism". As Dinanath Mishra says, "If anyone speaks for the average Sangh worker, it is Thengadiji. And he has made a speech which is more anti-US than any politician can dare to." So while there may be subtle variations, the overwhelming mood in the parivar is anti-American.

But that's right now. RSS strategists say the mood in the country and globally may change if this war does lead to an increase in international terrorism and suicide bombings. As a senior RSS functionary put it, "Now Saddam is talking in terms of a holy war and jehad. Every time he does that he may garner support among Muslims, but some of the sympathy of the rest of the world will wane." Political scientist Zoya Hassan concurs: "If the RSS is indeed claiming to be opposed to this war, then they are responding to the popular mood. Right now the Hindutva brigade is probably finding it difficult to turn this war into a Muslim issue. But we will have to wait and see how the situation develops. If the imagery of the war changes, then, certainly, the RSS will change its position."

At the moment that appears to be a distant possibility. Like the rest of the world, the Sangh too is outraged at the sight of a superpower trampling all over a small nation. As the average pracharak keeps asking with an acute sense of helplessness—whatever happened to the war against terror?