First Laloo, then Nitish, back to Laloo and now with Nitish 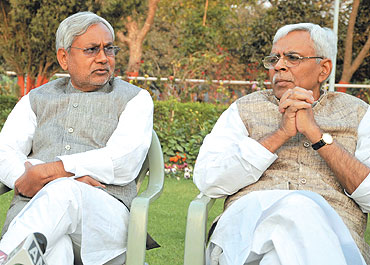 The quintessential political advisor of the Hindi heartland, Shivanand Tiwari has, over the years, demonstrated his utility to both RJD chief Laloo Prasad Yadav and JD(U) boss Nitish Kumar. He began his career as advisor first with Laloo, then shifted allegiance to Nitish’s party, from where he launched some of his sharpest attacks on the RJD chief. That did not last long. He returned to Laloo, before finally making his way back to the JD(U) again.

Of course, since both Laloo and Nitish consult a range of people before drawing up their respective gameplans, Tiwari’s on-and-off relationship with the two men hasn’t caused much heartburn on either side.