If it had to be a Nehru-Gandhi, why Rahul and not Priyanka? She was the better bet. 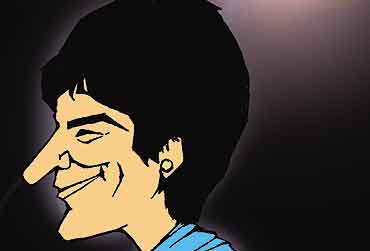 outlookindia.com
-0001-11-30T00:00:00+0553
Charisma is inexplicable. Though rarer, it’s like intelligence or beauty—some have it, some don’t. There is no logic, no explanation. One child has it, the sibling doesn’t. All saints have charisma. But not all with charisma are saintly. Often the brave and the strong lack charisma, while the insecure and the vengeful are blessed with it. Unlike brawn that can be acquired through money and training, you have to be born with charisma. Yet, it has less to do with genes and more with destiny. Amitabh Bachchan has charisma, his son doesn’t.

The fact is, Priyanka has it. Rahul doesn’t. The most vivid demonstration of this was that famous photograph taken when India won the one-day international cricket match in Pakistan. Indians erupted in joy and the magic moment was symbolised by Priyanka with her hands thrown up into the air, an ecstatic smile stretching from ear to ear. Rahul stood alongside, face impassive, applauding politely. Priyanka was all there. Rahul was not there at all. Like many American women who have bad hair days, it could just be that it was Rahul’s bad day. But so far, there is very little to suggest that Rahul has charisma.

No doubt, Rahul attracts huge crowds in the Gandhi family pocketboroughs. That has more to do with dynastic loyalties and the uncanny resemblance to his father who was loved dearly by Amethi voters. And like his Dad, Rahul seems a decent, likeable person. But charisma is something totally different. It’s a strange alchemy of inner spirit, energy, fire, radiance, enthusiasm, spontaneity. It’s genuine and springs from deep within. It can’t be faked. It’s the spark that charges you while energising others around you. Priyanka has it.

She is the Congress party’s best and sole weapon to take on the BJP. Charisma is the most powerful component in politics. It breaks through all barriers, difficulties and logic. And Priyanka is the only one in the Congress party to have charisma. Besides, she belongs to India’s First Family. She has an all-India appeal. She connects instinctively and instantly with voters. She rejuvenates party workers. And she is young. None of the scions of political families in the fray come anywhere close to Priyanka’s charisma. She could easily capture the imagination of India’s women and youth.

If only she wanted. If only her mother would let her. If only the Congress would be savvy enough. But so far, Priyanka has remained a sheathed weapon. She will hit the campaign trail soon, but at least as far as this election is concerned, it is already too little too late to bring about a dramatic shift in Congress’ dwindling fortunes. She is charismatic, but after all, she is also only human.

But with potential. With India shining and all, Hindutva has given way to good governance and we are witnessing the morphing of BJP hawks into doves. Unleashing Priyanka would be like setting the cat among the pigeons. We’d see many fuddy duddys scurrying for cover, many firebrands getting hysterical again and hurling new and shop-soiled abuses once more. When threatened, the BJP tends to become more aggressive. Besides, Priyanka is a natural fighter and even if she doesn’t mean to, she brings out the fighter in others. Remember how hysterical Mayawati got when Priyanka commiserated with a Dalit in her backyard!

The trouble is that when it comes to fights and accusations, Sonia Gandhi is always on the backfoot. She is defensive due to a combination of circumstances and personality. In politics, to be defensive is to lose. Attack first or be slaughtered is the credo, especially of the Right, be it in India or America. And we have seen over the last few years how brilliantly the BJP attacks and how pathetically the Congress gets slaughtered. Fair or unfair, Sonia is vulnerable to slander, jokes and criticism regarding her origins. And she is un-Indian in many ways. She is un-Indian in the way she has restrained her children from entering politics. Look at how leaders of all parties have feudalistically pushed their sons into the fray. She remains an enigma in many difficult situations unlike Mayawati, Maneka, Mamata or Jayalalithaa, all of whom have shown their penchant and flair for histrionics and street politics. Sonia is neither clever nor crafty and that is again so un-Indian. Above all, her speech is too stilted and her body language too stiff to be Indian. Unlike charisma, physical attributes are genetic. To have that inborn Indian feminine gait and grace, women in your family tree had to have carried clay pots of water on their heads for 5,000 years.

Priyanka has plenty of Indian genes—in fact, amidst the dominance of her Indira matrix, it’s hard to detect her Italian genes. So the main BJP complaint against Sonia flounders against Priyanka. But the Hindutvawadis can be counted on to dredge accusations and they may even reopen her grandma’s closet to dig out skeletons. But they would certainly need something more than phrases like Rome Rajya or high-tech spin-doctoring to counter her.

So far, Priyanka has chosen to remain an untested commodity in Indian politics. Her platform surfaces organically simply because she is born into the right family. Her birth has enabled her to draw aces effortlessly. But her trumpcard is her charisma. We saw from the crowd reception during the cricket match how Pakistan has already fallen under Priyanka’s spell. If Pakistanis could vote in our election, Priyanka would be the next prime minister! But it’s our election and it’s our birthright to be difficult, demanding and dodgy. Nothing is simple or linear in our complex land. Still, there is a public craving for charisma, for political excitement, for dynastic glamour, for freshness, youth and vitality—all of which Priyanka embodies. If she, her mother and the confused Congress party play it right, Indians could easily come under her spell.

When Host Is Guest