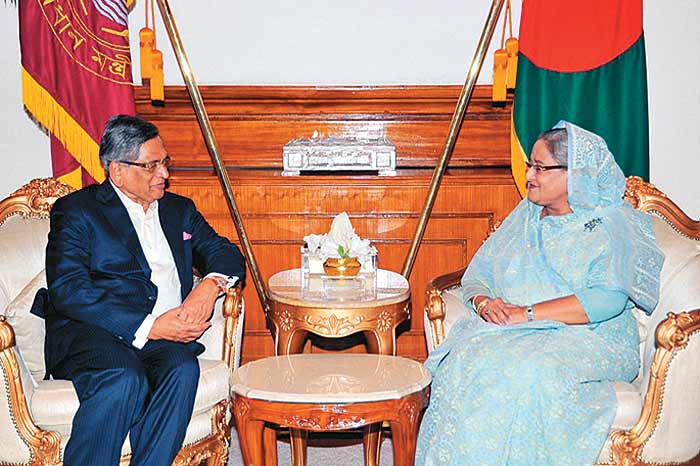 A 48-hour bandh call, sit-in demonstrations and street protests of the Opposition snowballing into a pitched battle with the police—these were the images Indian foreign minister S.M. Krishna faced as he landed in Dhaka on July 6 for a three-day visit. Usually bursting to the seams with teeming millions thronging noisy, congested streets, the near-desolate Dhaka that greeted him just didn’t provide an appropriate backdrop to propel India-Bangladesh relations on a higher trajectory.

But herein lies the twist, typically Bangladeshi—those who had taken to the streets were venting their anger against Prime Minister Sheikh Hasina Wajed, and not against Krishna or India. There were two distinct sections among the angry collective—opposition forces had rallied against Hasina’s decision to abrogate the constitutional clause that requires a caretaker government to oversee the general election; the other section was out there bemoaning the government’s lack of resolve to adequately bolster the secular foundation of the constitution.

This, though, doesn’t mean the people here aren’t miffed at Prime Minister Manmohan Singh’s impolitic remarks about Bangladesh in an informal chat with newspaper editors in New Delhi. To them, Manmohan had said that at least 25 per cent of Bangladeshis were anti-India, owed their allegiance to the Jamaat-e-Islami, and were in the clutches of Pakistan’s ISI. Inadvisably placed on the PM’s website, the remarks were eventually pulled out—but not before wounding Bangladeshi pride.

An opinion piece in Dhaka’s Daily Star faulted Manmohan for exaggerating the numbers of staunch Jamaat-e-Islami supporters who are consequently deemed anti-India. The newspaper has a point—in all the four general elections beginning 1991, the Jamaat’s best performance has seen it bag just 8.61 per cent of the total votes, a far cry from Manmohan’s figure of 25 per cent. Pointing to another of his comments—“the political landscape in Bangladesh can change anytime”—the piece said New Delhi must improve its relations with Dhaka to such an extent that a change in the political dispensation in Bangladesh does not impact negatively on India’s security and prosperity. 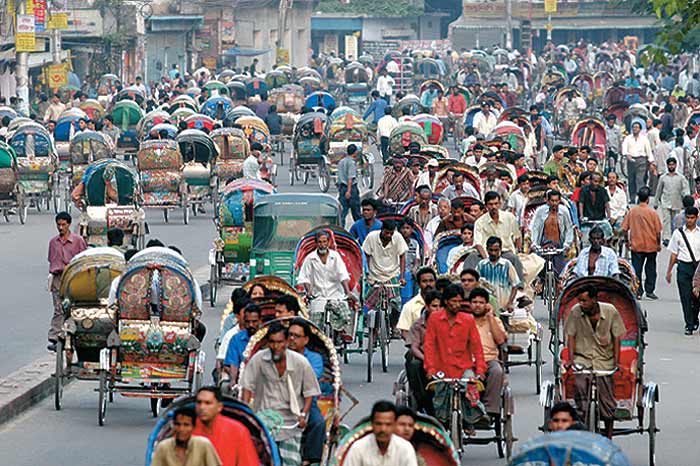 The PM’s comments did rile Bangladeshis, but only temporarily, as India defused the situation very quickly.

Others tried to analyse the motives behind Manmohan’s controversial remarks. So what was his intent? The New Age said, “It would not be a stretch to presume that the comments arrived at the right time to exert an influence on the number of agreements that are likely to be signed during these (Krishna’s and the PM’s) visits.” As for the Jamaat, it was quick to condemn the remarks as “baseless and untrue”. Its acting general secretary, A.T.M. Azharul Islam, said, “The Bangladesh Jamaat-e-Islami is a political and an Islamic movement party. It’s the party’s duty to talk in favour of the country’s interest.” He also vehemently denied any links between the Jamaat and the ISI or any other foreign intelligence agency, and said it wasn’t opposed to India.

The consensus here is that Manmohan did rile Bangladesh, but only temporarily. As Prof Imtiaz Ahmed of Dhaka University told Outlook, “Well, the citizens did react, but didn’t overreact; nor did the mainstream opposition Bangladesh Nationalist Party led by Khaleda Zia. In fact, many people laughed at Manmohan’s claim that 25 per cent of Bangladeshis are anti-India. Do I understand that the rest are pro-India? That figure is very unlikely.” Agrees former Bangladeshi high commissioner to India, Liaquat Ali Chowdhury, “In appreciation of the possibility of a positive development in the Indo-Bangla relationship, the people did not demonstrate their anger on these unwarranted comments.”

Perhaps Bangladesh isn’t infuriated because India acted with alacrity to defuse the situation. Apart from Krishna’s visit, Manmohan made a call to Hasina and announced dates for visiting Bangladesh, which hasn’t hosted an Indian premier for 12 years now. Yet, even the Indian foreign policy establishment faults the PM for not exercising discretion. Former diplomat Ronen Sen told Outlook, “We need to be mindful about the sensitivity of our neighbour, especially when we are commenting on their internal situation. The issue isn’t about the veracity of the comments, but the fact that it was not kept confidential by PMO officials. This needs to change.”

Change it must, for New Delhi can’t expect a friendlier government in Dhaka than Hasina’s. For all the ripples Manmohan’s remarks created in Bangladesh, Hasina sent her foreign minister, Dipu Moni, to receive Krishna at the airport, signalling her resolve to strengthen bilateral relations. This had also been on vivid display during her visit to New Delhi last year, when she promised to address New Delhi’s security concerns. India returned the favour by extended a whopping $1 billion line of credit to Bangladesh. Says Abdul Matlub Ahmad, president of the India-Bangladesh Chamber of Commerce and Industry, “India’s credit for building the road and railway infrastructure from Bangladesh to Tripura will widen the scope to explore the huge consumer market in India’s northeastern states.”

Yet Hasina was unsure of Indian reciprocity to her efforts, as there was no clear indication then of a Manmohan visit to Bangladesh. Only through that visit could Hasina counter her detractors, who claimed New Delhi hadn’t warmed to her overtures. With the Indian PM’s visit now scheduled in September, Hasina would get enough chances to prove India means well. Indian goodwill was on display during Krishna’s visit that saw the inking of two agreements between India and Bangladesh—one seeks to protect and promote each other’s bilateral investments; the other allows trucks plying between Bhutan and Bangladesh passage through India. Krishna also assured Bangladesh that several projects under the line of credit were now in the “implementation stage”. He confidently declared in Dhaka, “The bilateral cooperation between India and Bangladesh is on a high trajectory.”

Will Indo-Bangla relations tick now, in a better way than before? “For it to work,” says Sen, “the relationship has to be perceived by people of both countries as mutually beneficial.” Sen argues that New Delhi must change its attitude of perceiving its projects in neighbouring countries as favours bestowed upon them. He also thinks New Delhi must quell opposition to its foreign policy plans from states bordering Bangladesh in the larger national interest, as also that of Indian business interests. 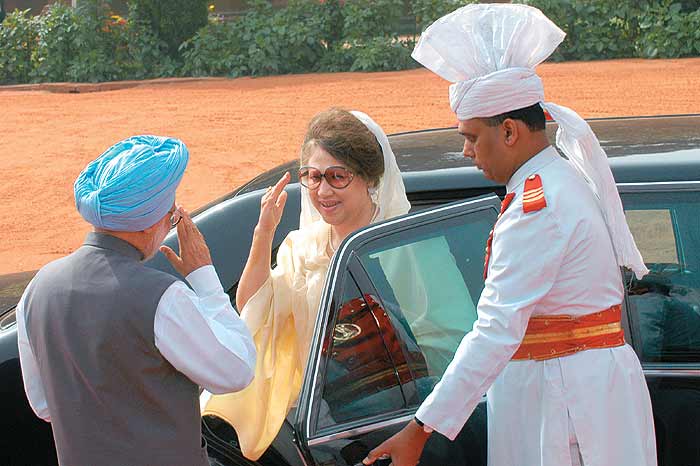 Take the textile sector. Bangladeshi garments are not only of good quality, but are priced low, as it is a labour-intensive industry. Providing the Bangladeshi textile sector access to the large Indian market will boost employment and endear India to Bangladeshis. Adds Sen, “The trade imbalance between the two sides is huge and favours India. Though we may not be able to narrow the gap overnight, by giving Bangladeshi garments access to the Indian market, we can perhaps make a dent.” Sen, who has worked in the Indian mission in Dhaka, believes “India’s ‘Look East Policy’ will not work” without Bangladesh, Myanmar and the northeastern states earning a stake in developing the region.

An obsession with Pakistan often makes many in India overlook Bangladesh’s importance. Says Leela Ponappa, a former diplomat who had earlier handled the Bangladesh brief, “Bangladesh’s importance needs to be brought into the Indian people’s consciousness. It is a very intense and extensive relationship. There are huge opportunities for both sides which need timely cashing in on.” For one, India and Bangladesh share a massive 4,000-km border, the porous nature of which lets many Bangladeshis to cross over, and also criminal gangs from India seeking a safe haven there. This phenomenon has resulted in the Border Security Force of India exchanging fire with the Bangladesh Border Guards (the erstwhile Bangladesh Rifles). Since every such incident becomes a highly emotive issue in Bangladesh, it is imperative for the two sides to evolve a mechanism to address this problem at the local commandant level through regular interventions.

Despite the hope enshrined in the Indira-Mujib agreement of 1974, nearly 6.5 km of the border still remains undemarcated. The exchange of enclaves that belong to one but are under the control of the other is also pending. No agreement has yet been reached on “adverse positions”, areas which, by virtue of their location, are under the control of one country but difficult to govern. Still hanging fire is the problem of sharing the waters of the Teesta and other rivers.

When Manmohan visits Dhaka in September, it is believed agreements on these contentious issues—better access for Bangladeshi goods to the Indian market, better border management, and water-sharing—will constitute the “big package” the two sides would agree upon. Former Indian high commissioner to Bangladesh Veena Sikri says, “We need a few high-visibility projects in Bangladesh as China has got. Modernisation of railways and dredging of rivers are examples.” Perhaps then the Indian premier might discover that he has no need to dream up anti-India forces.

By Pranay Sharma in Delhi and Saleem Samad in Dhaka