Swim In A Bubble

P3 doors have opened wider to allow the reapers of the new economy. And the media ensures it occupies our interest. 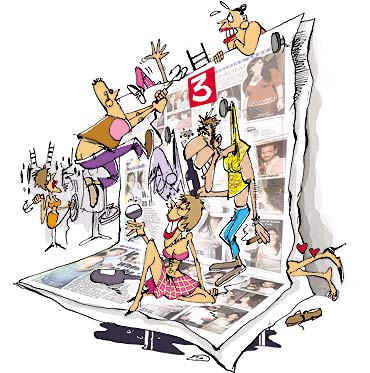 Tsunamis, earthquakes, trains and markets being blown up by terrorists, or the rise and fall of governments, only momentarily slow down the inhabitants of Page 3. They are no more than an unwelcome hiccup in an unending round of parties, book launches, art vernisages, weddings, anniversaries, film premieres, wine tastings, the launching of perfumes, watches or cars, the opening of gyms, and even shoe shops.

The original Page 3, an invention of the British tabloids, was famous for its photographs of outsize-bosomed sexy women in various stages of undress. Sometime in the late '90s, the term got tossed into our media and redefined to include people whom the media thought were worthy of their notice.