Swaraj Is My Birthright

FOR a nation learning to walk, Nehru was guide, philosopher and king 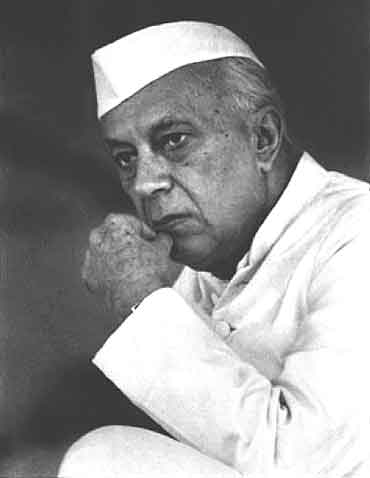 A painful, 'caesarean' birth it was. An infancy seared by dark, pre-natal memories. Those figures still bustle with life. One Lord Louis Mountbatten, cousin of royalty, cheerleader of a retreating Raj, suave butcher. He landed on March 24 and, in three months, announced the land of the Indus would be cut up in three. One Sir Cyril Radcliffe, who was to perform the actual surgery. The musty, India-ignorant lawyer's tools: a map and a scalpel. One Nehru, willing midwife.

There was pink in that midnight sky. Its terrible 'negative', the darker hues, swamped the earth. Millions of severed umbilical cords, awash in blood; perfidious acts committed in a rash of madness, amid stray redeeming tales. The final wages of freedom: 10 million people uprooted from their homes to seek sanctuary elsewhere, over half a million slaughtered. For Bharatvarsha, it was baptism by blood.

The limbs of India had to be assembled. There were 563 princely states, not all rulers willing to merge their destinies with a fledgling nation. The Maharaja of Kashmir threw in his lot with India and ceded power to Sheikh Abdullah only when his kingdom was invaded. The Nizam of Hyderabad had delusions of grandeur; the Nawab of Junagadh tried to opt for Pakistan. In the end, deputy PM Sardar Patel stepped in with an iron hand and brought them to heel.

In the last triumph of his credo, a fasting Mahatma calmed rioting mobs in Delhi in January '48. He had desired death as a "glorious deliverance" rather than having to be "a helpless witness to the destruction of India, Hinduism, Sikhism, Islam". The grim irony of his assassination gave India the most sobering moment in its first flush of freedom. Nehru, voice choking with anguish, broke the news to the nation: "The light has gone out of our lives and there is darkness everywhere." As world leaders paid homage to the apostle of ahimsa, the acerbic Bernard Shaw retorted: "It shows how dangerous it is to be good." Meanwhile, the nation strutted forward. In June, C. Rajagopalachari was sworn in as the first Indian governor in place of Mountbatten, throwing off one of the last shackles of the Raj; and Sheikh Abdullah confirmed as the prime minister of Kashmir with Karan Singh (son of Maharaja Hari Singh) as the Sadar-e-Riyasat. The war with Pakistan over Kashmir came to an abrupt end on January 1, 1949, with a UN-sponsored ceasefire. A blow to India's prestige was Sheikh Abdullah's harsh criticism of the government. In one of Nehru's more obdurate decisions, the Sheikh remained under house arrest in Ooty for full 11 years.

One can't labour through India's difficult birth pangs without mentioning the forces' first commander-in-chief, Gen. E.M. Cariappa, the "Brown Sahib" and a Coorgi with a shaky command over Hindustani. His gaffes while speaking the "native" tongue created a genre of Cariappa jokes. The most celebrated being his address to jawans after independence: "Aaj ham muft ho gaya"—(today we can be had for free).

Buoyed by a new Constitution that contained radical proposals—universal suffrage, equality for all—and steered by a Planning Commission that put in place the Soviet-inspired command economy, India turned a republic in '50. The leaders concentrated on the "temples of modern India"—lofty dams, steel plants, power plants, ships, atomic reactors. The man behind the Planning Commission was Tarlok Singh of the ICS, who'd played a key role in refugee rehabilitation. It came to be said that India had three houses of Parliament: Rajya Sabha, Lok Sabha and Tarlok Sabha. Globally, Nehru shared the dais with non-aligned stalwarts Tito and Nasser; and ushered the Panchsheel spirit of 'Hindi-Chini bhai-bhai' with Chou En Lai, one that was to prove fragile.

Back home, India's internal geography was being redrawn—under the States Reorganisation Act passed in '56, new administrative units were built around linguistic enclaves rather than physical criteria. Its troubled legacy, the never-ending water disputes like Cauvery, is still with us. Language riots broke out in Ahmedabad over the proposed division of Bombay state into Maharashtra and Gujarat.

The Fifties saw the south politically astir. When Rajagopalachari quit as chief minister of Madras state in '54, non-Brahmin K. Kamaraj Nadar took up the reins. He organised Congress ranks south of the Vindhyas, but the tilt to the coming Dravidian upsurge was made. A parallel revolution was consummated in Kerala—E.M.S. Namboodiripad headed the world's first elected communist regime in '57.

By now, Nehru's days as a world statesman were drawing to a close. His Achilles heel was Kashmir. Nehru sent Krishna Menon to put India's case to the world. But even his famed 13-hour speech failed to move the Security Council, which Pakistan had approached. Ally Soviet Union bailed us out.

National pride was being gently stoked in the sportsfield. The two Olympic hockey golds in London and Helsinki whetted appetites. Cricket got its moment of glory in '56. In the fifth Test against New Zealand in Madras, Pankaj Roy, 173, and Vinoo Mankad, 231, set up a world record for the first wicket partnership. Cut to 1953. Sherpa Tenzing Norgay and New Zealander Edmund Hillary scale Mt Everest. The twist in the heroic tale—no one knows which of the two first put his foot on the peak. Tenzing is dead and Sir Hillary refuses to disclose the secret.

The decade closes with Mother India bagging the Oscar for the best foreign film. But the most abiding image of the era? Perhaps, the tilted Gandhi cap and the Nehru jacket with a rosebud on the third buttonhole...