International Swaraj And Suzerainty: A Parable

Swaraj And Suzerainty: A Parable 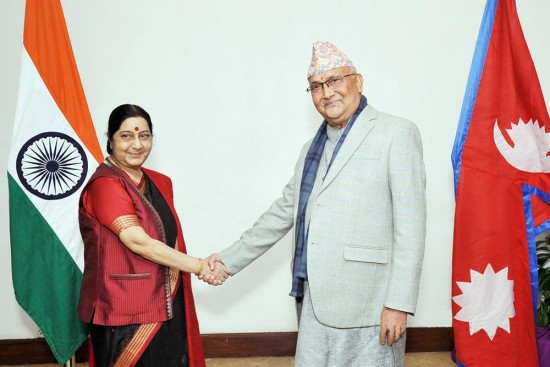 Outside of the quixotic Gujral doctrine, India occupies a def­ault ‘Big Brother’ mode in the subcontinent—and conciliatory gestures are not what its neighbours usually expect. Caught in its self-image as the defining core of South Asia, India has often waited for the smaller nations to reach out to smooth wrinkles, if and when they app­ear to strain bilateral relations.

But equations have changed with China looming large and looking to expand its footprint and influence in the Himalayan arc—whether coercively, as in Doklam last year, or diplomatically, or through a blend of both. New Delhi knows it can no longer afford to leave anything to chance.

Indian foreign minister Sushma Swaraj’s two-day “goodwill” visit to Kathmandu last week for talks with Khadga Prasad Sharma Oli, leader of the Communist Party of Nepal (UML) and very possibly the next prime minister—an office he held for nearly a year in 2015-2016— has to be seen in that context.