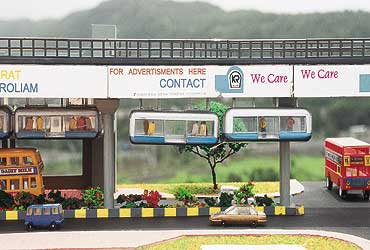 outlookindia.com
-0001-11-30T00:00:00+05:53
When prime minister Vajpayee recently gave the go-ahead to a Rs 25,000-crore mission project, he paved the way for a revolutionary rapid transit system which may just transform the average commuter's life—citizens of the four metros as well as Bangalore, Hyderabad and Pune may soon be walking in the sky.

The Skybus Metro is the dream project of B. Rajaram, MD, Konkan Railway Corporation. Says he: "The system will have the manoeuvrability of road transport with the capacity of a train system". As the skybus follows the road, it can cut down the connecting time one spends in autorickshaws and buses, especially in a city like Mumbai. For instance, with a skybus every minute at the maximum speed of 100 km/hr, an average journey in Mumbai will be cut down to 7-8 minutes! Further, the installation requires no acquisition of land or transport zone but prefabricated structures ensuring the least invasion of public space or movement.

"The main strength of the skybus," explains Rajaram, "is its computer-centric safety design." Plus, it's eco-friendly and cost-effective, qualities which have helped the project win many friends. Says Debi Goenka of the Bombay Environmental Action Group: "Mumbai's public transport is on the verge of breakdown, so people prefer private transport. The skybus looks like a workable solution to this problem." The seven-city project will save 1,750 tonnes of carbon emission per day and a fuel import bill of Rs 10,000 crore. Its speed and frequency of service can help clear congestion faster and cut waiting time to almost nil.

At Rs 25,000 crore for 560 km, the skybus comes far cheaper than other comparable projects. They will be two-coach units (so that several can be run every few minutes) suspended eight metres above road level from 8-metre-wide concrete boxes—even the skystations will be just 16 metres tall. The pillars for the aerial system will run along dividers, so that road space is not encroached upon. krc's own technologies like the auto driving device, the lightweight coaches and small stations will also help. Per route km of double line, the skybus will cost Rs 45 crore and carry one lakh passengers in one direction per hour (half of its potential). By contrast, an underground system will cost Rs 200 crore, yet carry only 60,000 people.

Says A.V. Gangurde, chief of transport and communication, Mumbai Metropolitan Region Development Authority (mmrda), which is working out the techno-economic feasibility: "We have invited proposals from consultants for the study to decide whether to support the project or not." But with the PM's green signal, four companies have already shown interest.

KRC has proposed an equity-based community system, a strategy that has worked for the Konkan railway line where the company visited villages, explaining the concept and winning acceptance. The mass equity base will provide the safety equivalent to a government project, explains Rajaram. Air-conditioned travel in a skybus should cost 20-50 paise per km, compared to Rs 6 by train. Anybody who buys 100 shares of Rs 150 each will get two peak journeys and unlimited off-peak journeys a day for his lifetime. Even cabbies who lose their business with the skybus will be allowed to invest and encash the free journeys in km cards. They could also sell these to floating commuters through kiosks that krc will set up and earn up to Rs 300 per day. The Maharashtra government has offered Rs 25 crore and the right-of-way to start work.

For krc, even the sky's not the limit as it draws up plans for earning through commercial activity. The 8-metre wide endless corridor could be used as urban space. Perhaps all Mumbai hawkers can find room there. The tops of stations could be exploited for lightweight shops and the slack period of

1-3 am for cargo. The present cost is based on the price of electricity, but Rajaram hopes to emulate countries like France using atomic power. The skybus has no signalling or criss-crossing and is almost accident-free. The ballastless tracks—without those stones on regular tracks—are maintenance-free. In case of emergency breakdown, the coach will just stop and evacuation through a door in the floor will be rapid and on to the first lane of the road below. All fire-causing equipment are in the concrete box above so that any fire could be contained there while the smoke rises above.

Indeed, safety is probably the strongest point of the skybus. In ground rail systems, any disturbance causes the track to throw the coaches, since the centre of gravity exists above the track. With the skybus, the centre of gravity lies above the coaches, so that they slip right back without any disturbance. Besides, the suspension links will not release them. That's another ground for cost-saving as the coaches can be light, "carry more people and use less steel," explains Rajaram. "Our primary concern," he adds, "is that public money should be used as prudently as possible." One couldn't agree more.