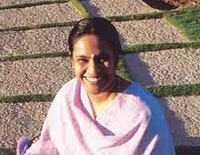 Geetha Kannan / HR Department
For over two years now, software industry employees across the world have all felt the pink slip hanging over their heads like a latter-day version of the sword of Damocles. It was little different at Infosys either, in spite of the company’s stated intent that it would not sack people. Slowly, however, Infoscions started believing what the top management was telling them. And that happened largely because the management claim was proved on the ground.

Take the case of Kannan. She was part of an elite, 369-strong department that handled e-business and dotcom clients, whose members were among the highest earners in the company. Naturally, when the tech crash and the dotcom bust eventually happened in 2000, Infosys decided to shut the division down.

But the difference here was, no jobs were lost. Every employee in the e-biz and dotcom wing was transferred to other departments in the company; Kannan herself was moved to HR.

There are literally thousands of Infosys employees who could have easily been shown the door by the company but were reassured, reskilled and reutilised. The result is a groundswell of staff loyalty and pride in the company that is unrivalled. Shrugs CEO and managing director Nandan Nilekani, "We have invested in extremely talented people. They were our assets and we had to keep these folks."

"The Man Who Runs Infosys"