Will the botched N-deal leave us playing catch-up in Asia? 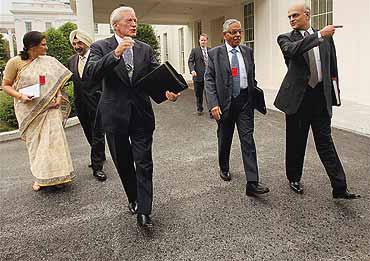 outlookindia.com
-0001-11-30T00:00:00+0553
Senior UPA Minister
"We cannot inject instability into the system. From day one, there has been difference of opinion and we can’t ignore the fact that it is difficult to proceed. We have to carry our allies with us."

Government Official
"We are on unchartered political territory. We will see and do what is possible after attempting what was ambitious."

The hard-fought, pathbreaking Indo-US agreement aimed at ending the global nuclear apartheid against India lies comatose, the blood drained out of it thanks to coalition politics and the Left’s ideological intransigence. The Left may have won the battle but it is India that may be battle-scarred. By forcing the UPA government to put the Indo-US nuclear deal on hold, thereby sinking it slowly, the Left has ensured that technology restrictions on India will remain for the foreseeable future, its energy options will be limited and that most precious commodity—time—will be lost. A chance for India to enter the international nuclear mainstream mostly on its own terms and rid itself of the pariah status would be missed. At least for the time being.

While Prime Minister Manmohan Singh, who staked his personal prestige on the nuclear agreement, remains hopeful of "evolving a meaningful consensus" on the deal, UPA ministers tell a different story. "We can’t inject instability into the system. We have to carry our allies with us," a senior UPA minister said. Another minister asserted: "The foundation has been laid and the next administration both in the US and India can take it up." Unfortunately, the time-table dictated by the US political calendar came into direct conflict with the Indian political calendar, said one official. "We are on unchartered political territory now. We will see and do what is possible after attempting what was ambitious," he said.

Technically, the Left and the UPA still have a chance on October 22 when the joint committee meets to sort out differences on the nuclear agreement. Sources say that the UPA is attempting to separate "the Bush aura" from the next most immediate step—negotiations with the International Atomic Energy Agency (IAEA) on a safeguards agreement as required under the nuclear agreement. Once that is done, the deal goes to the 45-nation Nuclear Suppliers Group (NSG) for a waiver for India. In reality, the Indo-US deal is an Indo-world deal because it opens the technology door to 45 countries, not just the US. The UPA’s inability to project the agreement for what it actually was—a huge political deal—and allowing it to be bogged down in scientific arcana was the first blunder, say analysts.

Optimists say the time-frame for pushing the agreement through various international hoops before the final vote by the US Congress, though already tight beyond comfort, can still be managed although it would need a Herculean effort. "It is not outside the realm of possibility to squeeze some of the phases but it will make it much more difficult," says a senior Indian diplomat. To which replied a US diplomat sarcastically: "Yes, theoretically, you could still do it on the last day of this administration." When crafting an agreement, political realities and processes in both countries matter and it doesn’t help to think that the world will align itself to suit one country’s needs. True, India’s economic growth will compel suitors to come courting but can New Delhi once again demand the removal of nuclear restrictions as the price?

The history of international politics shows that an opportunity rejected is often an opportunity gone. The alignment of interests and actors may not converge in India’s favour for a long time. Nehru refused an American offer to take China’s permanent seat on the UN Security Council in the 1950s because he believed it was aimed at "creating trouble between India and China". India has been struggling since to get that permanent seat, China being one of the staunchest opponents of expanding the Security Council.

The same harsh irony applies today whether the Left recognises it or not. "You may have noble intentions for opposing the nuclear deal but what are the consequences of your decision? That is what ultimately matters. The Left may have ensured we won’t play second fiddle to the US but we will play second fiddle to China in Asia, in competing for resources and prominence," said Naresh Chandra, a former Indian ambassador to the US. "It will also affect India’s relationship with Japan."

Diplomats agree that India’s credibility will suffer as a result given the certain era of coalition governments in the future. World leaders will wonder if the government has an ‘NOC’ from its coalition partners before negotiating an agreement of any magnitude. India’s foreign policy so far enjoyed national consensus but this is the first time that after giving his word, an Indian prime minister has been forced to step back. "This has never ever happened in six decades of independence," a senior diplomat commented. "Our civilisation lays emphasis on giving your word and keeping it."

Believers in reincarnation say the deal can be revived at a later stage, perhaps with the next US administration because the logic of stronger Indo-US relations remains true. They agree that it may be impossible to meet the deadlines for completing all the stages before the end of President George Bush’s term in office. After the IAEA and NSG clearances, the US Congress must still approve the agreement and it needs 90 business days to schedule a vote. By the middle of next year, the US will be thick into the presidential election campaign with little attention to spare.

If the Democrats win the White House in 2009, it may well be back to square one—questioning of India’s nuclear and missile programmes and denying the special status Bush was trying to bestow upon India. A senior Democrat has already sent e-mails to friends cheering the demise of the Indo-US nuclear deal. Strobe Talbott, who conducted the dialogue with Jaswant Singh after the 1998 nuclear tests, recently told a gathering of strategic analysts that he considers the eight years of the Bush administration an aberration rather than the norm.

Hillary Clinton, the likely Democratic nominee for president, refused to lend support to the deal despite requests from the Bush administration and Indian Americans who contribute handsomely to her election war chest. "She didn’t utter a word when there was a real fight in the US Congress," a US analyst said. She voted for the Hyde Act in the end but after voting also for the so-called "killer amendments," thereby having her cake and eating it too.

"It won’t be the fast forward but reverse button," a US insider said. "We were trying to establish a new set of rules to accommodate India. You are not going to get this deal again," he said. "Russia doesn’t have the clout to do this although they would benefit greatly from the deal" by bagging contracts to build new nuclear reactors. In the end, a country whose strategic embrace the Left accepts will gain more in the first flush if the deal goes through, not America.