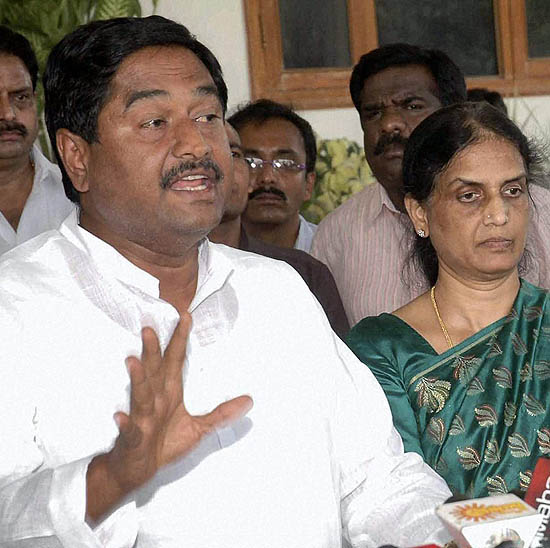 The Congress might have coasted to a predictable win in Karnataka, but in neighbouring Andhra Pradesh, it is looking down the barrel. After the UPA government at the Centre sent Ashwani Kumar and Pawan Bansal packing in two scams that competed for headlines, the tainted ministers in Kiran Kumar Reddy’s cabinet saw their cha­nces narrowing. The high command made it clear that those chargesheeted by the CBI in the Jaganmohan Reddy illegal assets case would have to go too.

Accordingly, the chargesheeted home minister Sabitha Indra Reddy and roads and buildings minister Dharmana Pra­sada Rao resigned, and have been wea­ring an air of pained martyrdom ever since. Three other ministers—Ponnala Lakshmaiah, J. Geeta Reddy and Kanna Lakshminarayana—who received noti­ces from the Supreme Court on the controversial government orders they issued in Jagan’s favour are on tenterhooks. They are next in the CBI’s sights.

All this has left state-level Congress leaders seething with resentment. Many ministers in Kiran Reddy’s cabinet feel they are being made scapegoats for decisions the Y.S. Rajasekhara Reddy regime took. “All this while Kiran Kumar Reddy sits pretty and clings to his gaddi,” one senior minister told Outlook. Three other Telangana Congress MPs—G. Vivekanand, Manda Jagannadham and K. Rajaiah—are all set to join the Tela­ngana Rashtra Samithi in June. This despite Congress scion Rahul Gandhi meeting them and coaxing them to stay.

The last straw was Congress spokesperson P.C. Chacko issuing a statement saying Telangana statehood was not on the UPA’s agenda. Though Chacko later said he had been misquoted, the Telan­gana MPs had had enough. “Does the party high command mean to say Chacko issued a statement without Madam Sonia and Rahul Gandhi’s knowledge?” asks Jagannadham. “There is a serial breach of confidence. Congress leaders’ state­ments that Telan­gana statehood is not instant coffee or dosa or pressure-cooked rice are insulting.”

Pradesh Congress Committee chief Botsa Satyanarayana isn’t exactly helping matters by saying that if the Telangana MPs want to leave the Congress, there is nothing that can be done. “If someone wants to go, how can we stop them,” he had asked.

But these are the lesser of the Cong­ress’s woes, and its belated pangs of morality in dumping tainted ministers  are fooling no one. Telugu Desam lea­der Kodela Siva­prasad Rao points at two more Cong­ress ministers—S. Sail­ajnath, recently caught on tape in the Cobrapost hawala scam, and Erasu Pratap Reddy, whose name has been floating around in the cash-for-bail scandal. “The list seems endless. The high command is in a hurry to dump tainted names but corruption has crept deep into the party. It is like purchasing a ticket after the train’s left. People may not be reacting violently to corruption, but when the time comes, they’ll show their anger through the ballot,” he says.

The chief minister’s own silence on the resignations also raises a lot of questions. “The CM has tried to protect the two ministers by sitting on their resignations for long. Why?” tdp’s Rao asks. “They’re being provided with gov­ern­ment legal services. Why? Besi­des, both Sabitha Reddy and Dharmana Prasad say they merely implemented cabinet decisions. Kiran Kumar has to answer if the entire cabinet’s tainted or only the ministers, and what his role is.”

PCC chief Satyanarayana lays the blame squarely on Jaganmohan’s door, saying he alone was the direct beneficiary of the YSR government’s corruption. The YSR Congress alleges that the chargesheeted ministers are just pawns in a Con­gress conspiracy to keep Jagan in jail. How­ever, all its machinations will do Jagan’s popularity no harm, says the party’s Ambatti Rambabu. “If anything, more leaders from the Congress and other parties will join us now,” he says.