In the wake of its deadliest mass shooting, America once again confronts its unending cycle of gun violence 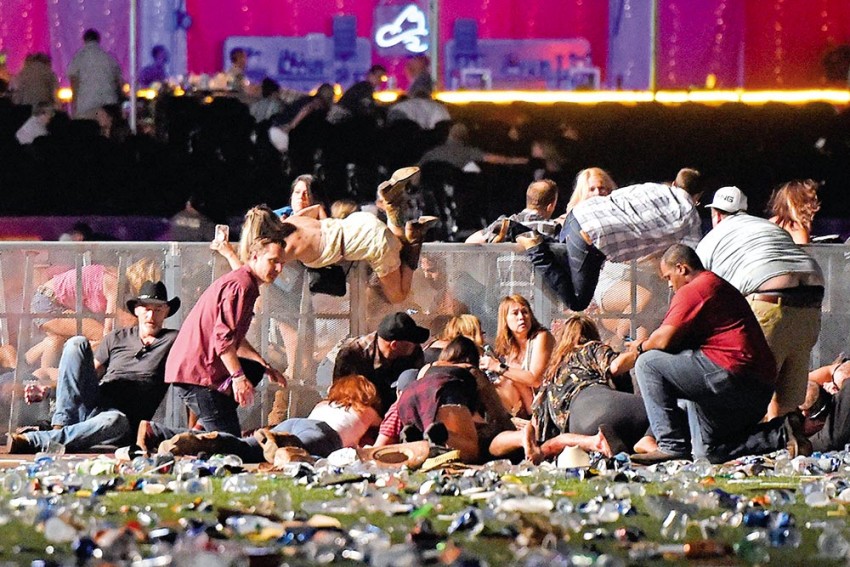 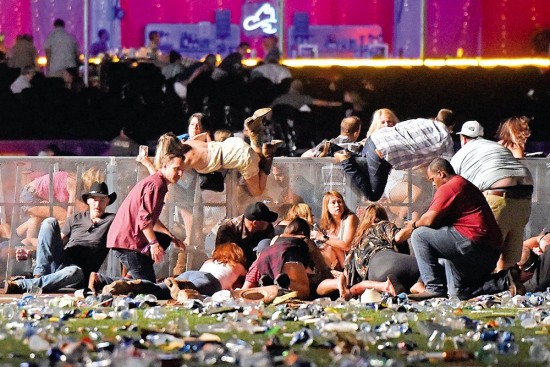 They came from near. And they came from afar—as far as Ala­ska. For thousands of country music fans at the Route 91 Harvest festival on the outskirts of Las Vegas, the three-day open-sky jamboree was coming to one glorious, rambunctious end, with meg­astar Jason Aldean’s eagerly awaited closing performance. But suddenly, and without warning, the groovy and warm Sunday evening turned into a night of unmitigated horror. The shooting started a few minutes after 10; it went on for at least 10 UNI­nterrupted minutes. Bullets rained in bursts upon hundreds of people, spreading confusion, disbelief and panic.

The murderous hail left over 50 dead, more than 500 injured, and a nation’s heart shredded into pieces. Sara Hass, a survivor, later relived the moment on NBC News. “Everybody starts running, everyone’s on the ground, everybody’s yelling, everyone’s confused,” she said. “No one knows what’s really going on. Everyone thought it might have been fireworks, but it was...you know....”

They know indeed. Although the deadliest mass shooting in recent US history, the tragedy in Las Vegas was hardly an aberration. In a country with half the world’s civilian-owned guns—over 300 million, by an estimate—mass shootings are routine. They make it to national news only when they are particularly poignant or the toll is unnervingly high. Five years ago, a gunman killed 20 children at an elementary school in Newport, Connecticut. It left then-president Barack Obama in tears and sparked nationwide calls for gun control. More than 1,500 mass shootings have taken place since then—one almost every day—according to the Gun Violence Archive. Gun control laws have remained stubbornly unchanged.

“Las Vegas is a painful reminder of how easy it is for anyone in the US to obt­ain not one but several weapons,” says Ever Figueroa, 29, a resident of Austin, Texas. “The shooter, Stephen Paddock, owned 23 guns of different kinds. This is unacceptable.”

Paddock wasn’t termed a terrorist; so wasn’t the killer at Charlottsville. Yet Omar Mateen, a Muslim, was dubbed one.

Little is known about the motives of Paddock, who fired through two windows from his 32nd-floor suite inside the Mandalay Bay hotel across the festival venue. His horde of firearms included an assault rifle and a Kalashnikov. The 64-year-old retiree was born in Iowa and had lived in Arizona, California and Texas before moving to Mesquite, Nevada, his last residence. His father was a bank robber put on the FBI’s most-wanted list, but Paddock never met him. Paddock himself had no criminal history, except a minor citation long ago, and had worked as a tax agent and a postal carrier. He shot himself dead before the police broke through his door.

Gun ownership is a sharply divisive subject in the US. About half the country—55 per cent, according to a Gallup poll this year—believes laws regarding the sale of firearms are lax and should be made more stringent, especially to prevent people with mental issues or a history of violence from obtaining them. But the other half views the “right to bear arms” to be a fundamental right and, indeed, an American virtue.

Votaries of gun rights swear by the Second Amendment to the US Constitution, adopted in 1791, which protects people’s freedom to bear and own firearms. Although much water has flown down the Mississippi since White Eur­opean settlers of the New World were organising into militias to fight off Nat­ive Americans, the amendment is still treated as sacrosanct. Even Americans favouring stricter gun controls talk of ‘reinterpreting’ rather than consigning the right to the dustbin of history. King Alexander of Yugoslavia and French minister L. Barthou were assassinated in Marseilles in 1934.

Another reason why gun laws have been so difficult to change is the influence of the rich and powerful gun lobby, notably the National Rifle Association. Created almost 150 years ago as a recreational group to “promote and encourage rifle shooting on a scientific basis”, the NRA—with its formidable lobbying power—has avidly championed lenient gun laws for decades. It argues that easy access to guns is necessary for Americans to defend themselves; every high-profile shooting elicits statements repeating the same logic—the tragedy could have been averted if the victims had also owned guns. With a reported budget of $250 million, the argument is heard—in particular by lawmakers.

“Gun ownership has become a hig­hly politicised issue,” adds Figueroa, who participated in protests last year against the Texas legislature’s decision to allow gun owners to carry concealed handguns on college campuses. “NRA is a very strong political force in the country. It has a lot of influence when it comes to policy in Washington. Even though many voters are against such easy access to guns, we’ve become a country where our representatives aren’t exactly listening to us.”

The Las Vegas shooting came as a reminder to Tarishi Verma of why she had had second thoughts about moving to the US from India two months ago. Verma, 25, is a first-year doctoral student at the Bowling Green State University in Ohio, where she also works as a teaching assistant.

“The first thing that came to my mind was that I could have been one of those people killed in Las Vegas,” she says. “Last week, I was at a huge gathering inside a bar here. Now, I don’t want to go out anymore, especially at night. My roommate, who is also Ind­ian, said the same.”

But easy access to guns in the US is something Verma worried about even before Las Vegas. “Gun violence is just too common here. That is why I am careful even when I am dealing with my students,” she says. “Anyone can pull a gun out of nowhere.”

Verma took to social media to express her dismay. So did several celebrities and public figures in the hours after the Las Vegas massacre. Aldean, the country singer who managed to escape with his crew when the shooting started, later wrote on Instagram that the night was “beyond horrific”. Pop idol Ariana Grande went a step further and tweeted: “We need love, unity, peace, gun control & for people to look at this & call this what it is = terrorism”.

Authorities and the American media have, however, refrained from using the word ‘terrorism’ to describe the shooting—or calling Paddock, a White Christian American, a ‘terrorist’. President Donald Trump said it was “an act of pure evil”—but not terror, and naturally refused to even raise the topic of gun control. This is in sharp contrast to mass shootings carried out by Muslims, which are almost invariably deemed to be terrorist acts. For instance, Omar Mateen, a US-born Muslim, shot dead 49 people at a gay bar in Orlando, Florida last year. He was immediately dubbed a terrorist. Paddock, despite striking unimaginable terror in the hearts of his victims, has been mostly described as a ‘shooter’ or ‘gunman’.

As the debate has heated up, officials as well as media organisations have come up with explanations, such as Paddock’s lack of political motive or allegiance to known terrorist groups. But only six weeks earlier, violence at a white nationalist rally in Charlottesville, Virginia, left a woman dead and several people injured. The perpetrator wasn’t called a terrorist despite his allegiance to groups that routinely call for violence against people of colour.

Nevada, the state to which Las Vegas bel­ongs, has a clear definition of terror­ism: “The use or attempted use of sab­­otage, coercion or violence which is intended to cause great bodily harm or death to the general population.” It car­ries no mention of political motive or allegiance to particular groups. Yet, Mayor Carolyn Goodman called Paddock “a crazed lunatic, full of hate”—not a terrorist.

The debate is not just academic. For 16 years, the US has used its full military, political and economic force to fight a global war against ‘terrorism’, but ref­uses to deal with the terrors of a gun culture gone berserk—putting people’s lives in danger every single day.

If Wishes Were Houses