India will have to watch the situation when Lara is in and they have the back-up around Tendulkar to ensure a good performance. 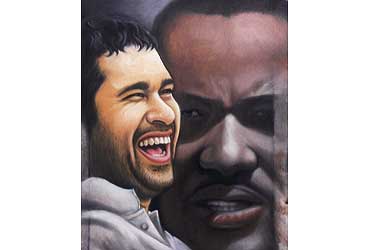 outlookindia.com
-0001-11-30T00:00:00+0553
Sachin Tendulkar and Brian Lara are great batsmen, comparable to any of any age but the best ever is up for debate. Bradman stands alone although I never saw him play. If statistics are your yardstick, and it seems everyone is hostage to numbers, then he is your man. Oh, but the aesthetics and joy of seeing a dominating player unconcerned with his average and intent on winning matches only. They are few and far between, which is why Adam Gilchrist is a modern favourite.

Tendulkar and Lara, in their different ways, have taken turns at the No. 1 spot and caused debate in hotels and bars around the world on who is better. I hate figures but I trust my instincts when assessing a batsman and there’s no doubting the ability of both men. They are geniuses but their paths couldn’t be more different.

Tendulkar has borne the brunt of India’s batting for over 10 years now and has done well everywhere except South Africa where wickets are seamer-friendly, always a big test for any sub-continental batsman. He is classical, plays all the shots and for me he has that presence and dominance that is so important for any great player.

What are Tendulkar’s strong points apart from his talent? Commitment has always been an enduring one. He has immense pride in the Indian cap and that permeates through the team. It isn’t easy to be the best and also be popular with your team. It sits easily with Sachin.

Consistency. Tendulkar very rarely has a poor series and that must give India comfort. The wickets in the Windies are now slow and similar to India. So the comfort factor will be high. The absence of quality bowlers in the Windies line-up might or might not be a plus. Sachin likes the challenge against the best. He must realise the Windies are a mere shadow of the halcyon days of the ’70s and ’80s. He will have to concentrate hard to keep his focus as no doubt other Indian players—who suffered at the hands of Australia and South Africa—will be keen to put some easy runs on the board. He will be at his best if India are by some miracle behind in the series. His footwork is neat and his wrists are like steel. No one hits down the ground with Tendulkar’s panache. He has it all but as he gets older there is less to prove. The Windies aren’t the same opposition as before and you have to believe Tendulkar would have been at his best competing against Marshall, Holding, Garner et al. Now that would have been worth watching.

Lara is more complex although there were signs during the Sri Lanka tour that he is more team-oriented, after years of being at loggerheads with Windies administrators. Playing at home always brings out the best in Lara. In one of the best knocks in Test history, he tamed a very good Australian attack to take the Windies to an unlikely victory. His 150 was full of inventive strokeplay.

India will have to watch the situation when Lara is in. If the situation looks hopeless, he has the supreme talent to dominate should the mood move him. He played Murali in Sri Lanka better than any other left-hander or indeed anybody else except Tendulkar. That’s probably the yardstick these days. How well do you play Murali in Sri Lanka? Only Tendulkar and Lara have dominated for long periods of time against Murali.

India have the back-up around Tendulkar to ensure a good performance. West Indies need Lara far more and his body language and commitment will be watched closely as the first Test unfolds. If Lara is intent on stamping his authority, it will be a lot closer. Tendulkar will always give his best and as sure as day follows night he will provide an innings or two of the highest quality which in the end will be the difference between the two sides.

(Barry Richards, considered one of the world’s best batsmen before Apartheid cut his career short, scored 508 runs in four Tests at 72.57)