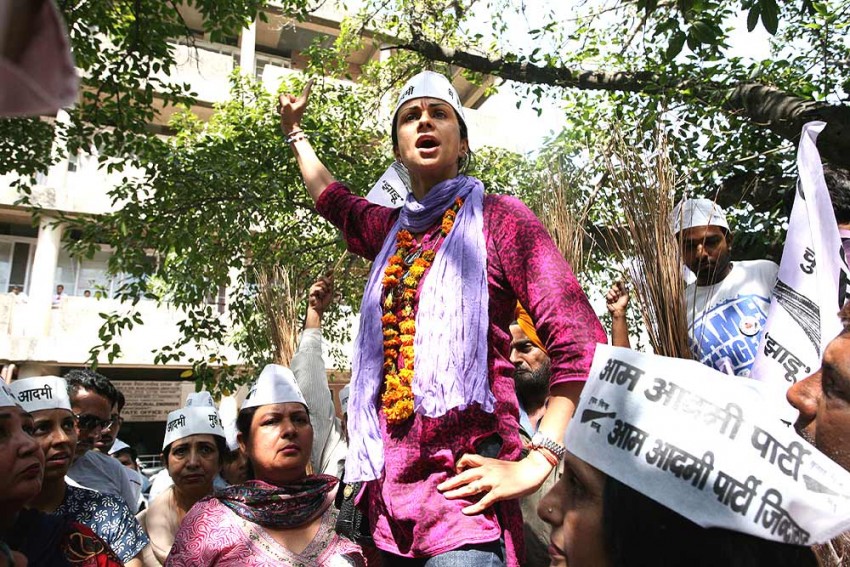 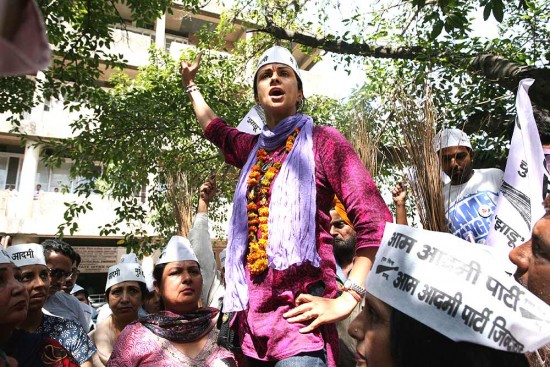 She slides out from the front seat of a small maroon car, the purple-pink patchwork kurta, pencil denims and rider boots complementing her robust gait, and moves towards her supporters with the air of a battle-hardened trouper. There’s no trailing security, save the retinue of Aam Aadmi Party followers who hover around her, and admirers who form a sturdy bastion. At her first campaign-stop in the heart of Chandigarh on a blistering afternoon, Gul Panag, former Miss India and now the city’s rising young political star, declaims dramatically (see picture): “Your MP is your servant. If she can’t be the voice to address your issues, then she doesn’t deserve to be your MP.” Loud cheers from the audience and sloganeering rends the air. When on the move, supporters dance to music, calling politicians ‘bloodsucking devils’ and ‘thieves’. Many distribute the party symbols—the broom and the Gandhi cap. The broom famously symbolises a clean sweep of India’s rotten politics. “We stand against corruption, communalism, crony cap­ita­lism,” says Devender, a young tec­hie from Ludhiana, a part of the AAP brigade.

It has been just a few weeks since Gulkirat Kaur Panag, as she prefers to call herself now, caught the attention of the national media after being surprisingly declared the AAP candidate from Chandigarh. She came in the place of Savita Bhatti, wife of popular satirist and actor, the late Jaspal Bhatti, who had pulled out of the race. “I’ve known Arvind (Kejriwal) since the Common­wealth Games and we kept mee­ting on different platforms. He sho­wed me that it’s possible to be the change you want to see,” she says. The decision to apply to the party, however, was purely on imp­ulse. Mumbai had become suffocating and the prospect of returning home was enticing. The daughter of a retired army general from Chandigarh, Gul has travelled to many places in India and abroad, but has remained a Chan­digarh loyalist. Her family has lived here since 1965, she studied here, worked for social causes and made films based in Punjab. “For me, the decision to join AAP was part-party, part-Chandigarh. The city has excellent infrastructure, yet there are glaring inequalities in every sector,” she says. 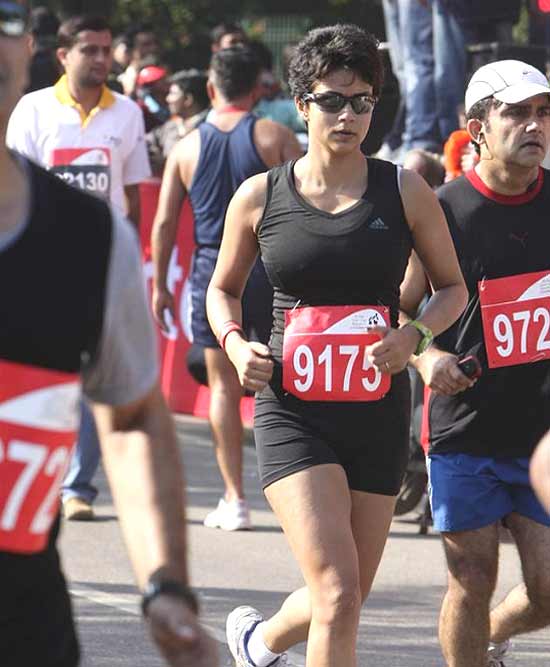 The opponent has used dirty tricks like circulating her old modelling photos to tarnish her image, but Gul is confident.

But it won’t be easy for Gul. Her Congress opponent is seasoned politician and old Chandigarh hand Pawan Kumar Bansal, who has dominated the political scene here for 15 years. The four-time MP was forced out of the railway ministry after his nephew was arrested for taking bribes in return for plum railway posts. He has, however, den­ied any wrongdoing. Bansal’s low-­profile men must now contend with Gul and the belligerent Kirron Kher from the BJP. The two Bollywood actresses, who were not active in politics before, are fighting out the ‘outsiders charge’. If there was prior bonhomie between the two, it has given way to Twitter-sniping: Gul tweeted, “Doubt if I’ll have the ene­rgy to run around like this and serve my people when I’m 60. I guess that’s why there’s normally a retirement age”, and Kirron responded, “I think retirement should be decided by people whe­ther they can mentally and physically handle something. You have 25-year-olds who are bimbos and you have 60-year-olds who are brilliant.” The opposition has also been trying out other dirty tricks, like circulating photos from her modelling days, to tarnish Gul’s pub­lic image. But she is confident of holding her gro­und. “In sectors, colonies, villages, there’s widespread resentment against Pawan Bansal and the Congress, while the BJP should have fielded someone less divisive than Modi as PM candidate. It’ll work against them in Chandigarh,” she says.

Gul roves on for the next seven hours, winding through residential col­o­­n­ies, streets lined with open workshops and business blocks, till the cavalcade reaches a village on the outskirts of Chandigarh by green wheat fields dotted with tractors. On the way, she is garlanded with marigolds and gives brief, fiery speeches at scheduled stops. Passers-by take photos, while requesting her in their ‘theth Punjabi’ to be the mascot for change in the rural hinterland. “The majority of peo­ple AAP wants votes from live in slums and pastoral colonies, so we adv­ise Gul on what to wear while canvassing in such areas,” says an aap volunteer.

During this rigorous door-to-door ‘direct’ campaigning, pamphlets are distributed, voters lured, promises made with the usual gusto. Primarily an urban constituency, only 30,000 people live in Chandigarh’s rural areas, but the AAP targets them as a potential votebank. As the spring sun starts to soften, we arrive at a jan sabha in a village elder’s home where, plonked on a charpai and visibly at ease in the rustic environs, Gul promises to redress the woes of village folk. “The locals are tired of water and electricity problems. The public education system is in doldrums. The system of governance needs a complete overhaul,” says Har­preet, a village leader.

Gul credits her training for long-distance running for her never-flagging energy. Up at 5 am every day, she’s out for a brisk run before hitting the campaign trail and retires only past midnight. Panag’s lawyer friend Swati, who has come from Delhi for a month to help strategise her campaign, even monitors her meals. “I believe in her and how passionately she feels about various issues. When age is on your side, you’ve got more drive.” Gul’s father, H.S. Panag, concurs. “My daughter is well-groomed and educated. She has taken up social causes, been vocal about wrongs in society and participated in debates. We need ins­pired leaders now.” Will Chandigarh heed Gul’s earnest promises?