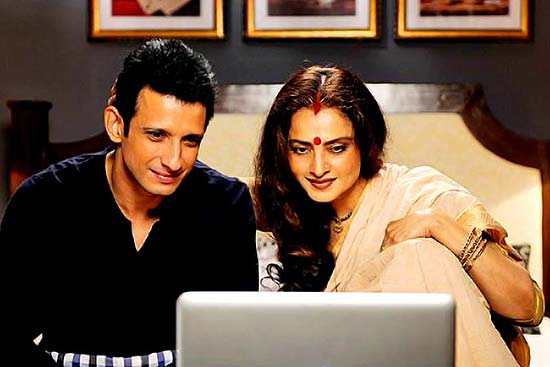 Every once a week comes a movie that makes all the bad ones of the rest of the week seem like Citizen Kane. Super Nani is like a blast from the past, films like the Rajesh Khanna starrer Avtar, in which the older generation gets severely ill-treated by the young. Or more recently, Big B’s Baghban, which was old wine in a new, affecting bottle. Super Nani is not in the same league. Here our poor Nani (Rekha) isn’t just stuck with obnoxious kids but an uncouth husband (Randhir Kapoor) as well, the kind who keeps sending her back to the kitchen. She is so willingly pliant and voluntarily repressed that even a doormat would sprout a spine on seeing her. Then the sympathetic grandchild (Sharman) steps in with a rather simple solution: makeover. So, Rekha turns hip, puts on some pancake and eye sha­dow and becomes a model with the biggest of brands behind her. If and only it was so easy to get liberated!

The tone is uniformly loud, not a moment is moving and ample amounts of regression is doled out in the garb of ‘Indian values’. The film tries to play on the nostalgia for Rekha. It might actually be no more than a myth.