Summer marks a high tide for Kerala ensembles at temple festivals. Casteism flows as an undercurrent. 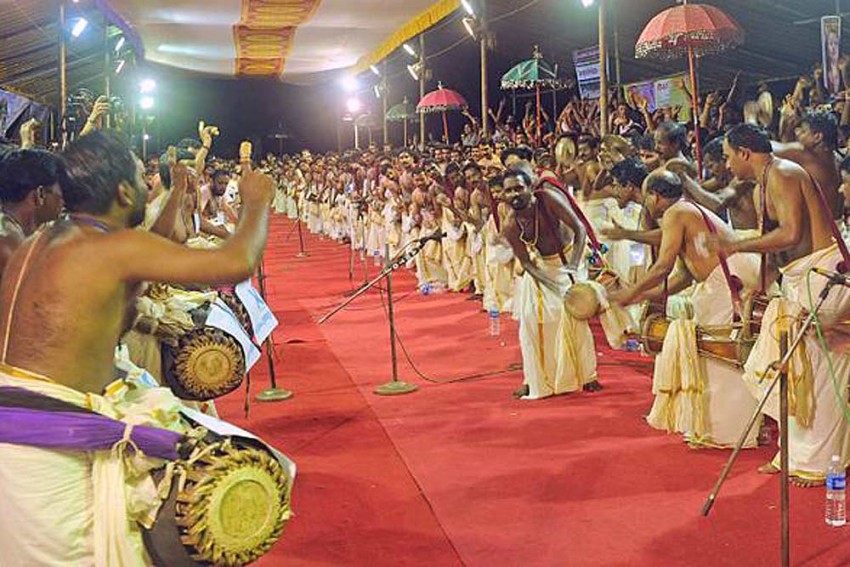 Surge
This jumbo concert in 2012 made it to the Limca Book of Records
Sreevalsan Thiyyadi April 27, 2017 00:00 IST Sunlight Alone Doesn’t Make Them Ebony 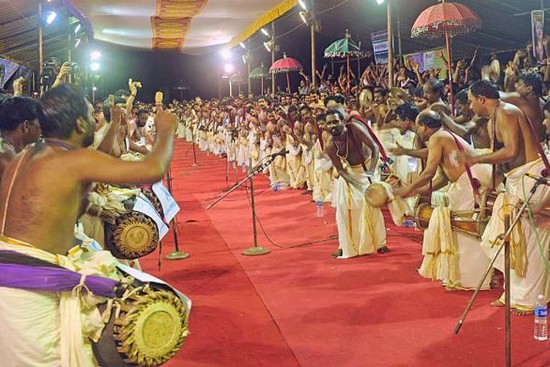 Indignation laces his pride when Vinayakan says rhythm runs deep in his blood as a Pulaya. The south Ind­ian film artiste, who won the Kerala government’s 2016 best actor award, is referring to his und­erprivileged community. The 43-year-old, possibly the first Dalit to win such a laurel in Ind­ian cinema, goes on to rec­all about his mother dancing Ona­kkali, stomping on the slushy paddy fields of Kochi. “It makes work enj­oyable; it’s also a sign of our generations-old sense of taalam,” Vinaya­kan notes. “I always found joy in the rhythmic variations of the trains that would chug down the tracks bang in front of my (tiny) house.”

Hardly eight km south of the railway line at Vinayakan’s Pullepadi home is Tripunithura that was the capital of the Cochin kingdom. A feudal hangover ref­uses to vacate the small town that is fast turning into a residential hub. Last Dec­ember, six months after dusky Vinayakan’s honour-fetch­ing Kamma­ttipadam released depicting the uprooting of the downtrodden in a growing city, Tripunithura’s most famous temple festival staged a sly drama ahead of a prestigious procession.

The aarattu ezhunnallippu, where the Poornathrayeesa deity is mounted atop cap­arisoned tuskers, features a traditi­o­nal ensemble. In its 2016 edition, the three-hour panchavadyam bore a histori­city: a Dalit percu­ssionist was among its 60-odd artistes playing those five ethnic instruments. This, 100 years after social refo­rmer Narayana Guru declared “We have no caste” and eight decades since ‘avarna’ people secured temple entry.

Puthussery Ranjith faced rounds of painful suspense before he made it to the outer edge of a row of 15 timila percussi­onists at the post-dusk panchavadyam that rung curtains down on the eight-day ulsavam festivities on December 5. For, the youngster is a paraya—a caste that gave English the word pariah. “A couple of artistes protes­ted. The organisers went into a dile­mma—and I had to int­ervene,” says activist-politician P. Vasu­devan.  “Much of the joy of performing is lost when you have to fight caste iss­ues,” chimes in Ranjith, who is from Choondal near Kunnamkulam in Thrissur district.

For ‘God’s Own Country’, temple festivals are much beyond religiosity. Called ‘season’, the state’s October-May months reverberate with age-old ense­mbles—some of them requiring 150 players to sound full quorum. While panchavadyam—the elaborate way it is heard today is a cen­tury old—is relativ­ely new, a range of melams front-lined by the vertical chenda drum is pre-­medieval. Plus, there is the more individual-centric tayambaka spanning two hours, led by the tap-and-roll chenda, which is also the lead background inst­rument in Katha­kali, the state’s famously sophistica­ted classical dance-drama.

Several factors play a role in the biases that can be overt or subtle. Not all resent, hence a thin veneer of harmony.

The instruments used in the melam-­panchavadyam-tayambaka category are employed in religious rituals, making their practitioners customarily from temple-allied Marar, Poduval and Kurup communities. For those artistes conventionally considered ‘below’ this segment, casteism is capable of hurting them with its blunt slap or subtle mockery.

The right wing, in principle, condemns such incidents. The Hindu Aikya Vedi, for instance, accused a temple adminis­tration of caste bias at an ensemble presentation three years ago. In January 2014, a top Devaswom Board official told cymbals player Kallur Babu to skip the evening’s panchavadyam of a temple in Guruvayur. For, the organisers at Edathirikavu learned he belonged to a ‘low caste’. Leftist outfits dub such insta­nces as bids to preserve caste elitism.

Amid the political fight, the Dalit artis­tes tend to be cautious. Timila drummer Kallur Unni, a cousin of Babu, says the sophisticated organiser won’t let out his community bias, still would side with upper-­caste artistes if an issue crops up. “It’s wise to be choosy,” adds the 50-year-old, who undertook higher studies from Kalamandalam Parameswara Marar.

That Unni’s guru is a seasoned maestro from a traditional caste handling panchavadyam proves prejudices are not all-pervading. “I don’t bother about the caste of my pupil,” says sexagenarian Marar. “My community has had an age-old tryst with the art-forms. Naturally, we have an edge in mastery and aesthetics.”

One of Unni’s open promoters is from a forward caste. Tichoor Mohanan, an expo­nent of the hourglass-shaped eda­kka that adds vigour to panchavadyam, is a Poduval. “There is no major caste bias,” he says. “Masters see some students of other castes stray into unorthodox styles after studies. That disillusions them.”

Mohanan’s central Kerala, yet, entertains a coexistence of communities in the field, unlike Malabar upstate. Chenda expert Payyavoor Narayana Marar says his native Kannur district and neighbouring Kasargod have tayambaka performers solely from forward communities. In the region’s ritual art of Theyyam, where mostly tribals handle the weighty drum, “the use of chenda is quite outlandish for us Marars,” he adds.

It took a strike spanning eight months in 1988 for Dalits to perform a panchavadyam at the temple in Guruvayur.

Much south, too, exists a similar dichotomy, says scholar-writer Manoj Kuroor. Travancore, he observes, has “far less” casteist feelings for historical reasons, but the region’s folk arts like Garudan Thullal and Mayilpeeli Thookam enjoy chenda support from backward communities alone. “Some of our big temples conduct major melams. They are led by Marars (despite the state government’s 1982-founded Kshetra Kala Peethom at Vaikkom in the locality having churned out practitioners of temple ensembles and Sopanam music). “Of late, the arti­stes are brought from upper parts of Kerala,” he says. “Mostly celebrities like Mattannur Sankarankutty Marar and Peruvanam Kuttan Marar (both Padma awardees in their sixties).”

Kuttan Marar, in a television interview, was asked if melams have a caste undercurrent. “Well, if Marars and Poduvals alone continue to lead major ensembles, it’s because they have a traditional advantage,” he tells actor-activist V.K. Sreera­man, the host. Sreeraman has profiled a subaltern percussionist from a village not far from his native Kunnamkulam. Peradippuram Thevan, who died in Aug­ust 2015 at age 82, did perform tayam­baka around Peringode in his afterhours as a labourer. A performer of folk forms, his initiation into the chenda came from the region’s richest Brahmin household: Poomully Mana, also known for its 20th-century patronage of the arts.

The pleasant paradox apart, woes punctuate Thevan’s son Peringode Chandran’s artistic career. Now 53, he did his timila studies from premier arts institute, Kala­mandalam, in the early 1980s. A couple of years down, at a famed temple festival in Palakkad district, Chandran faced humiliation when panchavad­yam anc­hor Pallavur Kunjukutta Marar, who invited the youngster, helplessly hin­ted at him to leave. “Some artistes aren’t comfortable with me, I was told,” he trails back to the episode at Nenmara-Vallangi festivity. All the same, it was Poomully’s Neelakantan Namboodiripad who helped Chandran join Kalamandalam, after which his hig­her studies were under (late) Annama­nada Parameswara Marar.

In 1988, organisers scuttled a Chandran chenda concert the last moment at a middle-Kerala temple on lea­rning “I am a Dalit”, triggering a protest tayambaka he performed outside the shrine. Ano­ther of Chandran’s stir, this time led by Parameswara Marar, lasted for eight months, forcing open the Guruvayur Srikrishna temple gates for Dalits to perform a panchavadyam—in July 1988.

Chandran wears a smile of victory when he recalls having anchored a show that made a Limca Book of Records entry for the largest panchavadyam—with 293 participants. The Aug­ust 2012 venture was at the Peringode high school ground, where the artiste had undertaken initial timila lessons as a teenager. Chandran’s brother Pering­ode Subramanian, 37, is an edakka player having gained name of late with his special team show. “Yes, ‘Edakka Vismayam’ is my sweet revenge,” he says about the two-hour programme featuring youths.

Tripunithura’s Vasudevan, who has penned a 2014 biography of Chandran, says he first interacted with the instrumentalist in 2005. “I told him (late) timila maestro Chottanikara Narayana Marar found him as a big talent,” he rec­alls. “Overwhelmed, Chandran wept; he thought big names seldom noticed him.”

Karukutty Sasi, a Dalit artiste, says his tayambakas are “sometimes viewed as the other’s” despite his completion of course from Kalamandalam a quarter century ago. Not different was the case with maddalam artiste Kadavallur Thami, who was a “victim of caste bias all his life”, says critic Sreechithran M.J. about the Dalit who died last August. Rebel musician Njeralath Harigovindan has veered away from the Sopanam ren­di­t­ion of his iconic father Rama Poduval.

Amid these, another festival season passes with ensembles echoing across the state’s humid days and nights.

Cures That Make A Big Killing