Haunted by bleak images of riots, famine and migration, he took refuge in literature. 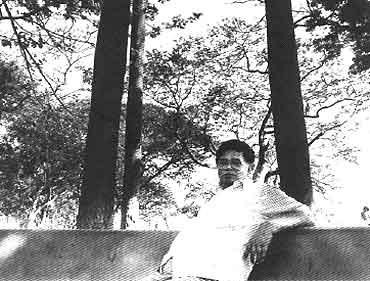 I had heard some commotion outside our Grey Street home in north Calcutta, and rushed to the window to find out what was going on. People were running helter-skelter down the toad, clutching on to shoes, clothes and sundry knick-knacks. Danga legeche! (riots have broken out), somebody cried. I had then quietly sneaked out, mingled with a crowd looting a provision store, casually picked up a latai (kite-string bobbin) bursting with coloured strings and scampered home.

I was young, loved flying kites, but couldn't afford them. So I thought filching the latai was good fun. Till I returned home and ot a sound thrashing from my father. It took me a while to realise that something was going wrong, awfully wrong. It was the summer of 1946, I was 12 years old, and communal madness was sweeping Calcutta. People were being butchered; the city's streets were blood-splattered. I saw bodies writhing and going into rigor mortis. There was a feeling that Muslims were behind all this. And many of us were behaving like born-again Hindus.

The year before, my father, who was teaching at north Calcutta's Town School, had moved us from our thatched village home in East Bengal's Faridpur district to Calcutta. Hard times had hit the village during the crippling Bengal famine in 1943. Food was scarce and petty crime was rampant. These bleak images later found an echo in my 1971 novel, Arjun . Thieves and burglars would use shovels to cut through the mud-walls of our home, sneak in and steal our belongings. One night as we slept, a thief entered our hut and coolly removed the blankets from our bodies. I woke up and was about to shout in sheer fright when I felt my mother's hand over my mouth. The thief slipped away.

My memories haven't slipped away though. The low-lying Maichpara village in the boondocks of Faridpur where I was born. The ponds which swelled and flooded homes and paddy fields during monsoons. The rocky boat-rides to the primary school. Swimming to friends' homes when they turned into little islands. Making my first journey to Calcutta by steamer, boat and rail as a six-year-old and settling down in dank, crumbling homes in north Calcutta's labyrinthine lanes. And returning to Maichpam six years after my father moved us out to Calcutta in the wake of the famine.

Three years later, as a teenager, I saw the burning and looting and killing on Calcutta streets. I found out that this was worse than the famine. Till, I went along with my classmates to meet Mahatma Gandhi who had gone on an indefinite fast at Beliaghata to stop the communal strife. Gandhiji told us to drink water from Muslim boys. We did that, and felt elated. Out doubts vanished. Next year, when the country celebrated its Independence, I felt gay and happy.

When I was returning to Maichpara in 1948, I faced some rather uncomfortable changes. The friendly boatman who took me to school asked me whether I had returned again to stay or was returning to India. I felt sad. Since then I've travelled to Bangladesh many a time, but never visited my village.