Indian shores, with a large pool of willing talent, are hot destinations for TNCs wishing to outsource. Could it be bigger than the software boom? 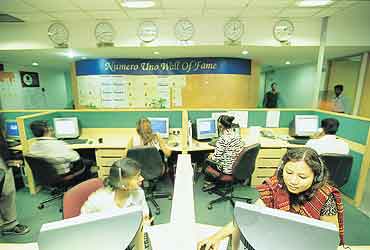 outlookindia.com
-0001-11-30T00:00:00+0553
In the dead of night, when all of us are fast asleep, there's something happening in hundreds of offices across the country that's poised to transform India's socio-economic fibre. Two lakh young men and women—and their number grows by the day—are working in quiet offices on whose walls hang some strange clocks. Strange, because the clocks show the time in New York, Los Angeles, Frankfurt, London. For these men and women—working the phones, answering queries, noting down complaints, solving problems—Indian Standard Time is a myth dismissed with a shrug the moment they enter their workplace.

Welcome to the backoffice of the world. Welcome to BPO—business process outsourcing—the three-letter buzzword that has hundreds of giant global corporations stampeding into India. Be it a Daimler-Chrysler, British Telecom, Barclays Bank, HSBC, Honeywell, their tribe is growing faster than Agent Smith clones in the Matrix trilogy. Both the Democrats and the Republicans in the US are wooing donors in their country through call centres based in India and manned by Indians. British Rail plans to shift its entire inquiries division to Bangalore. With the titanic old-timers—GE, Amex, Citigroup and others—now entrenched for a decade, Nasscom, the Indian software association, says that a fifth of all Fortune 1000 firms already have a backoffice address in India. And leading BPO players admit they get at least two inquiries per week from potential clients.

Estimates of the business that can be outsourced to India by 2008 range from $13.5 billion (Rs 63,500 crore) according to consultancy firm Gartner, to $21-24 billion (Rs 98,000-1,13,000 crore) as per a Nasscom-McKinsey study. India's share of the current global BPO business is less than 1 per cent. If this increases to even 5 per cent, that's an awesome $50 billion (Rs 2,35,000 crore). Currently, Indian BPO firms earn annual revenues of $2.4 billion (Rs 11,300 crore), and employ nearly two lakh people. Over 300 firms—both Indian and foreign—are running their operations here, sprawled across 7.5 million sq feet of space in places ranging from the metros to B-class cities like Indore. Obviously, the employment opportunities this explosive growth could open up are stunning. BPO has the potential to dramatically change India's economic landscape.

This could be bigger than the software revolution.

Why BPO? And why India? Organisations across the world are farming out a part of their operations to a third party or an in-house facility for distinct cost or other advantages. It could be the maintenance of accounts, audit sales, telemarketing, managing the human resources database, logistics, handling customer complaints, whatever. But the true driver for the uber-boom has been back-end work where the use of information technology or telecom infrastructure is critical. These would typically include data entry, information processing, problem-solving, real-time interaction and critical decision-making.

The slowdown in the global economy, post 9/11, forced transnational corporations to seek ways to slash costs. And finding cheaper options to outsource their work—to India, China, the Philippines, Ireland—was a no-brainer. The cost benefits of shifting routine work from the US to India can easily work out to 30-40 per cent or even more. For, a skilled worker in India earns between $6 and $8 in India as opposed to $12 in the US.

Of course, the world didn't beat its way to India's door overnight. India was a tough sell and the initial growth phase of the BPO industry saw enough blood, sweat and tears. Even in 2001, despite a decade of reforms and stupendous software success, India was still not on the radar of most foreign firms, other than pioneers like GE and Citigroup, which spotted the spark early.Today, Raman Roy, CEO of Wipro Spectramind, one of the largest call centres in India, can look back at those days with a chuckle. Days of clients checking out the Indian facilities with a fine-tooth comb. One of the most absurd 'Nos' Roy has heard came from a client who, after the initial meetings, called him to say, "No, I don't think your guys will be able to handle this work." When quizzed, she answered, "We went out for dinner with your team last night and they are all vegetarians. How can they handle our processes?"

A lot has changed. The question being debated in transnational corner offices today is not whether to outsource from India, but when and how. Explains Praveen Kankariya, president and CEO of the California-based Impetus Software: "Infrastructure was a limiting factor five years ago, although we were ready as a country. Today, the costs of leased circuits have come down to a third and we have fibre-optic links throughout India." In addition, as Vikram Talwar, CEO, exl Services, puts it, "People who outsource look at three key areas—infrastructure, talent pool (of English-speaking people) and quality of services. While infrastructure is there in some competing countries, India excels in the other two."

India has a huge base of English-speaking graduates who can easily be trained to handle low-end services like handling customer complaints, telemarketing and medical transcriptions. At the same time, we have graduates in specialised areas like science, finance and others to handle more specific activities. But the more distinct edge, says Arun Maheshwari, CEO of the $12.1-billion South Carolina-based Computer Sciences Corp, is that "India is putting people of much higher intelligence in BPO than the US and Europe where, because of other options, the sector has never been able to attract good brains".

And Indian firms are climbing up the value chain now. Initially, they did low-end work because, as Arjun Vaznaik, coo of Mumbai-based Tracmail, admits, "You want to get the low-hanging fruit first." But now his company, and others, are moving on to better, higher-end stuff. Says Nasscom president Kiran Karnik: "I know of financial services firms that initially brought basic accounting work here. But now they're getting fairly sophisticated work."

Yet another indicator of the growing confidence is the way captive BPO units of TNCs are expanding their Indian operations. According to Karnik, the captive units, which account for 35 per cent of the business and were the pioneers, are growing twice as fast as third-party vendors. Also, foreign clients are more comfortable giving out sensitive work to their in-house units. Finally, there's the comfort of feeling in total control. But, at the end of the day, Karnik believes India's will be a hybrid model of captive and third-party vendors.

Clients apart, even the final customers—in case the BPO firm is dealing with telemarketing or complaints—are beginning to feel good about India. Until recently, most employees felt their biggest problem was that customers only wanted to deal with "real Americans" or natives. "Now when they hear we're from India, they think it's really cool. They're very impressed that we're helping them from India. One of them even wanted to send me flowers," grins Anahita Mistry, who works at Wipro Spectramind's Mumbai facility. Mistry refused the offer with a polite no thank you.

Something is happening here—the birth of a new generation who, like their software counterparts a few years ago, are brimming with hope, overflowing with confidence, and walking around with more money than they ever imagined they would earn. There they are at the hippest pubs in the country, sipping their beers, smoking their cigarettes, living it up.You bump into them in trains, and they happily reveal how they quit their jobs in hotels or travel agencies to join BPO firms. "I earn more money, I earn more respect from people, and I feel I am a part of India's success story," says one who joined a Noida-based call centre a year ago and has already become a team leader.

Even in their offices, they're a breed apart. In Tracmail's Mumbai office, you'll most likely see US flags as screensavers, youngsters wearing T-shirts that say "Nevada" and a softboard where people have pinned suggestions on how to deal with irate US customers in the middle of the night. Elsewhere, you are likely to meet people like Manu Thakkar, Mistry's colleague in Wipro Spectramind, who created a forum where employees share their travails and seek solutions to their professional problems. In fact, Thakkar's team leader was invited by their client to start a similar thing in South Africa.

But perhaps the best impact of this BPO bull run is the subtle changes it has wrought among the more conservative elements of our society. Initially, Thakkar's parents thought it strange that he worked at night and slept during the day. "They wanted me to leave. Now they realise it's a respectable job."

By Arindam Mukherjee with Saumya Roy in Mumbai, Savitri Choudhary in Hyderabad and Archana Rai in Bangalore