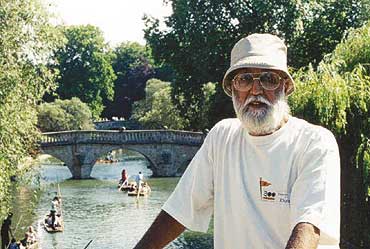 outlookindia.com
-0001-11-30T00:00:00+05:53
Sitting in the garden of an elegant two-hundred-year-old house, within sight of college spires, a cool zephyr gently blowing, I feel a million miles away from the Election Commission. How could it be otherwise? The summer is glorious—warm sun, fleecy, drifting clouds, occasional showers to keep the garden moist, girls in printed cotton skirts and deep straw hats, boys in cricket whites and plimsolls, ice cream vans, and, of course, punts on the river. The apple tree is in fruit, the bees hum about on their business, and an English dove is busy trying to build a nest. I am trying to concentrate on Bernier's travels in India at the end of Shahjahan's reign and the succession battle between Dara Shikoh and Aurangzeb. But to no avail. Zoya, my grand-daughter, all of three-and-a-half-years-old, has other ideas. I am required to put her on an apple tree branch, hand her fallen fruit which she throws at me with fierce speed and angles. I am expected to lunge about and catch them all. She plays John Wright. Sadly, my score is about as good as that of our valiant Test cricketers. Like them, my dropped catches are met with hoots of derisive laughter. No apple drops on my head as once it did on Newtons in a neighbouring college garden.

On other days I push Zoya's pram to the city centre, across the unending college lawns and elegant Cam bridges. While she sucks her umpteenth ice-lolly, I sit on a bench in the Petty Cury city centre and watch the crowds go by. They come in all shapes, sizes, dresses, nationalities. The fat central European in a shiny suit, the camera-loaded Japanese, the young English with hair cuts and colours of all varieties, rings in the nose, ears and navel, the couldn't-care-less African, and, of course, the perpetually-worried Indian. Very therapeutic, watching them, certainly for a recently-retired Election Commissioner of the world's largest democracy, etc. You have heard that one before. On market day preachers come along. The other day, while some ancient dames and I sat on the old fogies bench and ate our sausage rolls, an elegant seventy-year-old urged us to be saved by Our Lord. For good measure, he castigated the atheist professors of the University and called it Satan-driven. While I was willing to consider his thoughts, certainly about the university, the dames didn't give a damn, and of course Zoya only asked for another lolly. Occasional punting on the river on hot afternoons. After thirty years, I can still pole a punt and steer it tolerably.

One day I went to Fenners, the university ground, to watch the Oxford-Cambridge match. Time was when Ranji and Duleepsinhji, Peter May and Ted Dexter scattered elegance around these lush green lawns. Now the plodders remind me of an India match. The only saving grace—there is an Amir Khan in the Oxford team and a Kumar in the Cambridge one. Would you believe it, Amir is a genuine quickie and an exciting pinch-hitter, a la Adam Gilchrist, and Kumar an excellent fielder. Yes, Indians can be Jonty Rhodesian fielders sometime somewhere. Is Chandu Borde listening? Of course not. Can they ever see beyond state boundaries? Incidentally, how many of his dreary innings I suffered in my youth, mercifully on the radio. Cambridge lost. But I enjoyed sitting in the sun with a friend, lager and salmon sandwiches, and the occasional well-played Sah.

Summer evenings are given over to cricket. The vast St Johns grounds, college spires in the background. The physics faculty takes on the economics. We sit in the mild sun and watch. Work hard, play a while, pub sometimes, that seems the philosophy. Something that strikes me is the liberal availability of playing fields in the country. Contrast this with our Dilli, forget the rest. A greedy city policy leaves no space for the children. The odd green patch immediately has an ugly, dry fountain stuck in it, by an unthinking hard-hearted administrator. I ask myself, do Indian children also have rights, or is this luxury too for the adults only? I think there is a clear case for a pil on children's needs and rights. For instance, should there not be an acceptable ratio between the school child's body weight and the weight of the books he/she is asked to carry each day clinging to a cycle rickshaw along with ten other kids? Should not the honourable minister of education, and a noble judge, try this exciting roller-coaster just once?

To go back to the cricket—the play is leisurely, the sun pleasantly warm, the talk desultory. We wait for the last over and the opening of the college bar. Yes, every college has one, but they know how to use it.

In Cambridge, one always meets interesting people. At the Fenners, cricket over sandwiches, I got talking to an elderly couple. Surprise, surprise. The major was a member of General Rees' Punjab Boundary Force. Captain in the Suffolk Regiment, he worked out of Sialkot. He frankly admitted to their limited numbers, the size of their responsibility, the hopelessness of it all—"in a battalion of eight, we had less than three hundred men," he said. We sent four to a village on patrol, filled in the forms, and then left. They then cut each other's throats, he said with a gesture across the throat. It was good fun all the same, he said smiling back at the years. For me, after fifty-four years, it still hurt, deep in the guts.

At the St Johns cricket, dominated by subcontinentals, I met Chadha, a Yorkshireman from near Leeds, a fellow of Clare college. He teaches economics and has an accent that would do Geoff Boycott proud. His parentage, a mixture of Jalandhar and Sialkot. Another young man doing M.Phil who came to see me was a Phagwara-Kent product, if you know what I mean. Jalandhar men are smart, have a business sense. So Tanmanjeet's parents have a house and business in Phagwara and the same in Kent. He drives a Merc.

Had dinner with Dr Ajit Singh one evening. Ajit, thirty-four years in the university, is professor of economics. All these years he has been father to struggling India, Pakistan students. Ajit was always the first port of call on arrival. Generously fed numerous desi rotis at the Curry Queen, they had a permanent broad shoulder to lean on and put their academic and personal problems to. Parents might falter but not Ajit. Always patient, always positive. I know this—the Agra Summit might falter, the budgets invariably made by Cambridge men in both countries might not prosper, but like Noor Jehan, Ajit remains the bridge between the economics elite on both sides of Wagah. His other guest was a surprise—Professor Barua from Belfast university, a former fellow of Queens College, another distinguished economist come to examine for the Tripos. Son of the Barua, D.K, sometime Congress President, of Indira is India, India is Indira fame, possibly also a Cambridge man. The college sherry was excellent, the food even better. Believe me we did not discuss politics.

Walking around Cambridge colleges on an afternoon can be fun.I can never tire of looking at the cloister court with the masters lodge above, in Queens, my old college. I long for Lord Eatwell's annual sherry invite, sadly not received yet. College chapels and libraries are my favourite. The stained glass from over the centuries in silent chapels is a treat. The stoning of Mary Magdalene in Pembroke makes you want to weep. The great window of Kings, the panels of St Johns. The Trinity and Pepys libraries can be gazed at forever. The documents kept with such loving care, the visitors walking around with such respect, as if they were in a chapel. When in Cambridge, I can easily lay my hands on rare books and I read avidly. Two little stories from my reading. Bernier records that Akbar allowed the Portuguese to build churches in Agra and Lahore, complete with steeples. The Lahore church was demolished and the steeple of the Agra one brought down but not by Shahjahan's order. Mumtaz Mahal ordered it, the Portuguese having given shelter to a recalcitrant daughter. The guts of history. In the Life of Sir Charles Metcalfe, I read of how Mahadji Scindia in early nineteenth century used the Taj as a Maratha guest house. My friend Madhavrao can still claim a room there. Incidentally, at 23, Metcalfe made the treaty with Ranjit Singh, 27. The great English libraries speak of a civilisation's respect for its culture. What about ours? I went to see the National library in Calcutta. Its condition would make the stones weep. Is anyone listening? Wandering around, I like to touch history—Byron's rooms where he kept his bear, Nehru's in Wheewils court, Ramanujan's, Russell's, Marlowe's. In Pembroke I suddenly came across little boys in choir practise in the chapel. The English have given up religion but not their culture. The singing was angelic. I sat in a pew, closed my eyes and listened.

Do I miss elections and the Commission? That life is water under the bridge, already drifting to the sea. God screwed our heads on so that one can only look forward. For the present, the music is enough.

Walk On The Wilde Side