The latest round of acrimony could endanger the peace process 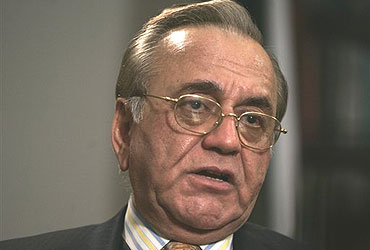 outlookindia.com
-0001-11-30T00:00:00+0553
When multiple bomb blasts rocked Mumbai Tuesday evening, Pakistani TV channels promptly switched from their live coverage of elections in Muzaffarabad to ghastly images of mutilated bodies and wrecked train bogeys. Voices of condemnation poured in from all quarters. But Hamid Mir, the popular geo TV host who's famous for his interview with Osama bin Laden, thought Tuesday's terror attack in Mumbai was only to be expected.

Hamid told Outlook, "Mumbai was waiting to happen. After the massive terrorist act in Nishtar Park in Karachi (around 50 people were killed there in April), it was only a matter of time that something similar happened in Mumbai. This is a part of the tit-for-tat process between India and Pakistan. A glance at the pattern of the last two years reveals that if something happens in New Delhi, you can expect a similar act in Lahore. The same goes for Mumbai and Karachi. The media in both countries fail to criticise their respective intelligence agencies—ISI and RAW." Implicit in Hamid's statement is the assertion that both India and Pakistan are engaged in a deadly game, which has as its essential vocabulary bomb blasts and targeting of the innocent.

Nobody responsible in government can, obviously, vouch for the veracity of such assertions. But the blasts did bring to the fore the apprehension of Pakistanis who assumed that India, without evidence, would once again point accusing fingers at them or the Lashkar-e-Toiba, a militant organisation banned in Pakistan. And though New Delhi didn't officially see any Pakistani hand behind the blasts, Indian TV channels quoting anonymous sources did not leave much to the imagination.

Yet, in a slight shift from the predictable script of blaming Pakistan for India's woes, New Delhi latched on to a statement of Pakistan foreign minister Khurshid Mehmud Kasuri to trigger a blast of the diplomatic kind. South Block thought it was appalling that Kasuri should tell Reuters in Washington, "I think the Mumbai incident—however tragic it may be, and it's undoubtedly very tragic—underlines the need for the two countries to work together to control this environment, but they can do so if they resolve their disputes." The purported link between terrorism and a 'root cause' naturally touched Delhi's RAW nerves.

The foreign office here denied Kasuri had made such a statement. "It was an interview with Reuters in which two issues were lumped together. At no time did the foreign minister link the Mumbai blasts with the issue of solving the Kashmir problem," the spokesperson told Outlook. Ironically, Kasuri here is often criticised as an inveterate 'dove' on India, and isn't among those whom you expect to issue insensitive statements against a nation reeling under a tragedy.

But this latest round of acrimony could further slow down, if not halt, the peace process—which has lost the momentum witnessed last year. As such, South Block has put a question mark on the future of the peace process because of its refusal to confirm dates for the meeting between the two foreign secretaries, who were to meet July-end to review the third round of the composite dialogue.

The dominant sentiment here is that both India and Pakistan should pool their resources to fight the scourge of terrorism. This was echoed in the editorial of the English daily Dawn, "It's time the two governments realised that terrorism is a common enemy they face and their success in fighting it depends on their joining hands in sharing intelligence and information of problems and persons involved in terrorism. They must recognise their interdependence in their common efforts to end violence or else both will continue to face a serious threat to their peace and stability."

Will New Delhi listen? It has in the past turned down Islamabad's offer of joint investigation into terrorist incidents. If Pakistan can cooperate with other countries in the fight against terror, it can surely with India as well.