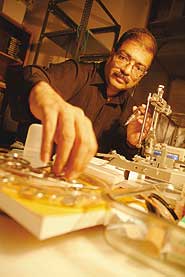 Why are some memories more powerful than others? Why do we tend to remember certain pleasant or unpleasant events forever? Why is it that even the slightest association to an unpleasant event triggers a violent reaction even after decades? These are some of the questions Sumantra Chattarji (Shona) at the National Centre for Biological Sciences, Bangalore, began asking as he switched from physics to neuroscience, quite perplexed that for over 15 years scientists worldwide had studied the hippocampus, the part of the brain that encodes factual memory (like names, phone numbers, dates) but neglected the amygdala, the part of the brain that encodes emotional memory.

The IIT Kanpur-Johns Hopkins alumnus decided to use stress as a tool because stress amplifies the difference between factual and emotional memory; the former declines and the latter is heightened. "We showed that under chronic stress the hippocampus shrinks (hence forgetfulness) but the amygdala has bigger neurons (hence high emotionality). For the first time, cellular correlation to behavioural dichotomy was shown." In 2002, it was a breakthrough finding in the science of memory, stress and anxiety. The spinoffs from Shona’s research are many. And drug majors are keenly interested.

So what’s it like doing research in India? "NCBS moves faster than MIT or Yale," he says, but adds: "We need dozens of institutions like NCBS. More of interdisciplinary research—with less of bureaucracy—is what’s urgently needed."