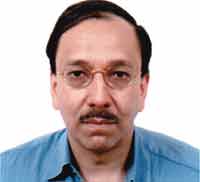 Tell us about your book.
It's about India's economic, cultural, political connections with the wider Indian Ocean world in the 19th and 20th centuries. It is an interpretation of the historical antecedents of globalisation and shows how there were multiple authors of the globalisation process. I argue that the history of the modern age was characterised by the interplay of multiple and competing universalisms rather than clashing civilisations. The book offers new perspectives on globalisation, empire and nationalism. It is an exercise in comparative and connective history written in a literary vein narrating stories of oceanic voyages of many Indians, elite and subaltern.

You've been on sabbatical from Harvard?
Yes, I've been busy with my research on the history of economic and political ideas in India in the late 19th and mid 20th centuries. I am focusing on the creative and innovative ideas that lost out in the battle for state power in 1947 -- imaginative ideas on Indian unity from say Aurobindo Ghosh and Bipin Pal and their ideas of ethical...