It's not exactly a return to militancy, but fringe radical groups get active again 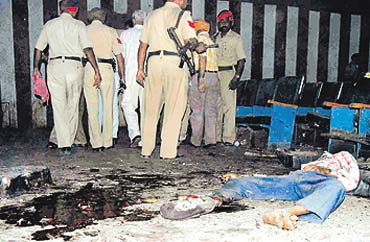 It has been almost a decade-and-a-half since the heyday of militancy in Punjab. One reason why the Punjab police was caught off-guard when a high-intensity blast in a Ludhiana cinema hall on October 13 left seven dead and 32 injured. Wracked as it is by internal dissension and politicisation, this act of terror couldn't have come at a worse time for the force. Long years of relative peace has bred complacency among Punjab's cops, which is why they have largely ignored several indicators suggesting possible terror strikes in the state.

One such warning came late last month from the Union ministry of home affairs. Based on intelligence inputs, the mha had sounded an alert towards a possible strike in Delhi or Punjab by activists of the Babbar Khalsa International (BKI). As a top intelligence official told Outlook, even after the relative peace in Punjab, security agencies have routinely tracked undercurrents in the extremist Khalistani groups both in India and abroad.

"In the last few months," says he, "there was evidence of some activity which was seen as part of the ISI's long-held plan to revive the Khalistan movement in Punjab. We are aware of its efforts in this direction and have been countering it whenever we get wind of anything. But since these Pakistan-based Sikh groups have not been successful in their efforts all these years, not much attention is being paid nowadays to such intelligence inputs and they are handled in a routine manner."

In retrospect, this proved to be an unforgivable lapse that resulted in loss of lives. National Security Advisor M.K. Narayanan too articulated the same fears when he told the media that "there has been a manifest attempt in Pakistan to build up a radical Sikh environment. We had intelligence about four to six months back that a lot of effort was going into attempts to foment militancy. We had been bracing for such a move by such elements".

There were other pointers too. Earlier this year, exploiting the violence that erupted over Dera Sacha Sauda chief Gurmeet Ram Rahim Singh's appearing in an ad dressed like the 10th Sikh guru, Guru Gobind Singh, fringe radical outfits in Punjab whipped up Sikh sentiment against Dera followers. They found some support from the ruling Akali Dal that was itching to get back at Dera followers for not backing them during the assembly elections in February. In the last couple of months, these radical groups, under the banner of the Khalsa Action Committee (KAC), have been organising well-attended Khalsa marches in the Punjab countryside where the thrust of the speeches has been on reviving the Sikh identity, language and culture.

It has taken on an ethnic hue along the way. Radical organisations with a violent past, such as the Dal Khalsa, have publicly expressed their opposition to the increasing number of migrants from Bihar and UP. The Dal Khalsa plans another Punjab Jagao march on October 31 from Amritsar to Hoshiarpur where, among other things, it has announced it will take up the issue of the changing demographic profile of Punjab due to the influx of Bihari migrant labour.

It wasn't a coincidence therefore that the target in the Ludhiana blast was the migrant labour community, probably the only ones interested in watching a Bhojpuri film in Punjab. As one police officer puts it, "These groups who were forced to exist on the fringes since the end of Punjab militancy have managed to corner more space for themselves now, due to the Dera tension. Though these overground groups may lack the ability to conduct a strike like this, their activities could have given a boost to underground militant groups desperate to revive militancy in Punjab. "

That these issues do provoke a strong public response was evident in the reaction aroused by the death penalty given by a local court some weeks ago to Jagtar Hawara and Balwant Singh of the BKI for their role in the assassination of then Punjab chief minister Beant Singh in 1995. The KAC lost no time in organising a well-attended prayer meeting for the convicts at the Akal Takht where Jathedar Joginder Singh Vedanti went to the extent of saying that "the court should have considered Hawara and Balwant Singh's cases sympathetically because their actions were committed in the heat of the moment".

That in fact the BKI bosses based in Pakistan, particularly Wadhawa Singh who took a personal interest in Beant Singh's assassination, were itching to retaliate against the Hawara-Balwant sentencing is a secret everyone knew in Punjab. And though most consider the revival of a separatist movement in the state a remote possibility, there is no denying that the retaliation against the death penalty has found a measure of public acceptance.

Punjab may not require a K.P.S. Gill yet, but given the current ferment in Sikh politics, the state needs to smarten up its police force. Most officers who were involved in anti-terrorist operations or intelligence-gathering have either moved out of the state or are nearing retirement. And with its former DGP, S.S. Virk, involved in a corruption case, the force is divided down the middle. As one senior officer puts it, "Most of us are busy currying favour with Sukhbir Badal (the chief minister's son) or fixing his political adversaries to have any time for anti-terrorist operations".