His shehnai could have got him anything, but Bismillah has wanted only a little. Updates 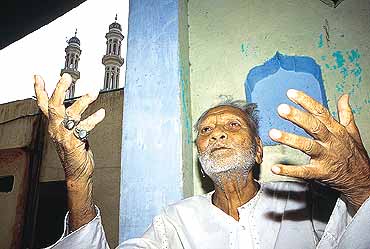 outlookindia.com
-0001-11-30T00:00:00+0553
A steady stream of well-wishers are weaving their way through Benia Bagh's labyrinthine lanes to the modest home of Varanasi's most famous resident, bearing gifts he doesn't want. One insists on installing an air cooler in the 87-year-old ustad's ascetic rooftop room, where he lives with his shehnai, prayer mat and a clay water jug. Another comes up with what for the Ustad is an even more outrageous proposal: he wants to instal an air conditioner.

This is possibly not the response Bismillah Khan had in mind when he went public last week with a grievance against Prime Minister A.B. Vajpayee. The PM, he claims, has not honoured a promise he made last year to grant Khan's grandson Mohammed Sippin a licence to run a gas agency. It was an unusual request from the doyen of the music world, who has won every conceivable award, including the Bharat Ratna, for his genius with the once lowly shehnai. For a man openly contemptuous of the opulent lifestyle of modern music gurus, a man who prides himself on supporting his large family on his professional earnings, he blatantly pursued the matter, sending off "not one, but two letters" to Vajpayee, and following it up with a personal meeting, even getting the PM to agree to a deadline (August 15, 2002) for issuing the licence. It's when that deadline expired that the Ustad decided to speak out. "I didn't ask for much. But these days, the government is only for themselves and their families. How much they've devoured! So much that they die from overeating. I thought that if the government helped me out by doing something for my family, I would be rid of my financial burden and could devote myself to music. Or at least give me two programmes a year so I can survive."

The maestro's financial burden would unsettle a man half his age: he supports more than 100 members of his own and his late brother's family, squeezed together in the ancestral "haveli"—a run-down warren of 16 tiny rooms with a common kitchen. As if this was not dire enough, he insists on doling out funds to his musicians when they are out of work and to the widows and dependents of former musicians in his team.

"He doesn't believe in saving," says Zarina Begum, who runs her father's chaotic household. "He gives away everything he earns, a little bit to me to run the house, and the rest to god knows how many people. For him, music is the beginning and end of life." Agrees son Mehtab Hussain—who, like two of his four brothers, has been playing the shehnai in his father's party for many years now without ever emerging from his benevolent shadow: "He believes you shouldn't run after money. You will get what you are fated to receive."

Fate, in fact, gave amply for many years, a ceaseless round of programmes that not only kept him from worrying about how to support his gargantuan family but enabled him to do what he loved: playing and extending the frontiers of shehnai music. And also the luxury of not doing what he didn't want to. Like settling abroad, as his admirers urged him to when he visited the US. "Not unless I can take my family, my musicians, my Benares, the ghats and the Ganga itself," he told them.

It is this fierce loyalty to a vanished way of life that is perhaps responsible for the maestro's straitened circumstances today. Raised in the court of Bihar's Raja of Dumraon, "where we were expected to do nothing but produce music", he stubbornly refuses to face the changing culture of the music world. Instead of promoting his own progeny as others have done, Khan is almost callous about his sons' careers. "If they have it in them, someone will spot their talent," he told his biographer Rita Ganguly. Which is perhaps why none of his 42 grandchildren show any inclination towards learning the shehnai despite his conviction that the family tradition was its future.It's only now that the truth has begun to sink in: that unless he provides for them in an avenue outside of the family profession, his progeny will starve after his death. Says a family member, "If they saw their grandfather, father or uncles going about with gold chains around their necks and silk kurtas, perhaps they would have been tempted. But which youngster wants to live like this on two meals and two pairs of kurta-pyjamas?"

"If any disciple offers him gifts, he invariably returns them," says his secretary Javed Ahmed. To no one's surprise, his professional management is singularly erratic. There have been times when he has demanded a lakh of rupees for an interview and then, in a burst of emotion, waived the charge altogether. At other times, he has turned down a lucrative offer because he had already pledged to perform somewhere free. Unaware of the earning potential from his tapes, he gave away his rights to a music company for a one-time payment of Rs 25,000. It is this innocence about financial matters that prompted him to dash off a letter to the home secretary when he learnt about his Bharat Ratna. Does it mean any money for me, he asked.

The innocence robs Khan's request to the PM of its preposterity. Sitting outside his room on the sweltering terrace, he sings a snatch of his inimitable music. "You can't buy that even for a crore of rupees. Traditions don't come through money, they come from generations of riyaz," he declares, stubbornly holding out against a confusing new world.