The box offers unfathomable opportunities for the voyeur 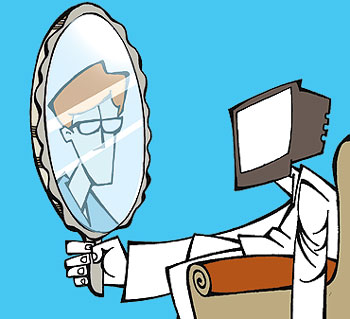 Make no mistake about it—I’m nothing but your garden variety voyeur. I’m the one sitting idly in a hotel lobby, watching people come and go; or waiting in a parked car, eagerly observing street life. And as for doctor’s waiting rooms, the pleasures they afford me are uncountable. I could dress up my voyeuristic streak by claiming I’m a ‘student of human nature’, or that I’m equally fixated on autobiographies, biographies, memoirs, travelogues, confessionals, but ki farak painda?

Last season, I was in danger of being written off by friends and family because I became obsessed with Bigg Boss. Each day I couldn’t wait until I connected with Rahul, Raja, Sambhavna, Payal and Monica. Sometimes I’d catch the show on its late-night repeat after watching it on its prime-time slot. So are you surprised that this season, with Rakhi ki Swayamvar on NDTV Imagine and Sach Ka Saamna on Star Plus, I’m spoilt for choice?

But from the vantage point of my familiarity with reality shows, let me start by saying that there is a difference between these shows. Swayamvar is a lark, and Rakhi and the show’s producers have their tongue too firmly in their cheek and their eyes too squarely fixed on the show’s TRPs to merit much thought. I watch it for sheer sport, always happy to wonder lazily who’s making a bigger fool of the other—Rakhi of her suitors, or the suitors of Rakhi, or the channel of us viewers. It’s like a World Wrestling Federation spectacle, in which you know it’s all been scripted, but are happy to play along anyway. Rakhi’s swayamvar is the teddy bears’ picnic of reality shows.

A shade darker is Bigg Boss. Here, the fun is to watch the participants’ neuroses rub up against each other. In Bigg Boss, after a couple of months, the nutcases melt down, the psychos freak out, and the degenerates degenerate. It’s like being afforded a window into an ant-hill where all the ants are insane. Can you blame me for getting hooked?

But as dark as Bigg Boss is, it’s nothing compared to reality TV’s latest offering, Sach ka Saamna. From the very first show, when I watched the dour Smitha Mathai (a housewife who runs a dabba service) field questions like ‘Would you sleep with another man if you were sure your husband wouldn’t find out?’, I knew this was the real thing. And since then, Monday to Friday, come 10.30 pm, I’m glued to my TV set, riveted by the bonfire of vanities that unfold.

In Sach ka Saamna, the questions are so close to the bone, the emotions so raw, the motivations so base, that often I find myself shifting uncomfortably in my seat, praying that the guest has the good sense to take whatever money he’s won and run before it’s too late, or feeling mortified on his/her behalf. And yet I watch. Fascinated, horrified, mesmerised, sickened, I watch knowing that polygraph tests are notoriously inaccurate, and that the show ought to carry a disclaimer about the validity of polygraphs. I watch, aware that the show compromises the dignity of the participants and perhaps destroys their lives; I watch, conscious of the fact that we’re only one step away from shows where cancer patients compete for life-saving drugs on prime time.

If I can sleep easy with this unexamined compulsion of mine, who am I to question the motivations of those who have opted to place themselves in this discomfited position? Sure, they do it for the money. And the fame. And yes, perhaps they are getting a flat fee for appearance, regardless of their performance. But, no sir, they are not my problem.
What riles me are our incorrigible causerati politicians. “The show is against Indian culture and is a danger to Indian society,” says the Samajwadi Party’s Kamal Akhtar with one eye on his votebank.

What irks me is the sanctimonious defence the show’s producer Siddharth Basu dishes out while running all the way to the bank: “(It) Can make you examine the relationship with truth, understand ourselves better and reinvigorate core values”.

Between these two positions there are the show’s countless fans who have voted with their TRPs. And me. Because the truth is that Sach ka Saamna—neither deserving of a ban nor of being touted as morally edifying—sure beats hanging around those hotel lobbies.