No horsing around, this. Owning and racing thoroughbreds is serious business for ladies who 'syndicate' in Bangalore. 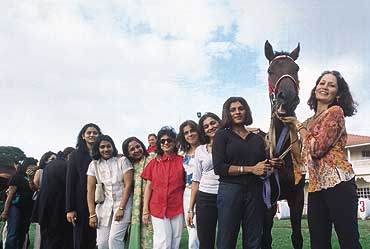 Suddenly, horses are becoming hot property among a group of women—including girls—in the garden city. Successfully 'breeching' this ambitious male bastion, they are dipping into their purses to buy pedigreed colts and fillies. At BTC, there are three all-woman 'syndicates' and India's lone woman jockey, Silva Storai, is adding glamour in the hitherto man-dominated world of high-stakes racing. The women of one 'syndicate' have more reason to be ecstatic: their Strombolix has won two trophies and finished second in another event.

It's an unusual coming together of women to forge 'syndicates' for the purpose of acquiring thoroughbreds and joining races. (BTC stewards talk of just two other similar women 'syndicates' abroad, both in the United States—The Girls with 10 partners, aged between 30 and 70 years, and a second 17-member unnamed one.) The stewards on their part are not complaining for they believe women as horse owners bring more fair play to the sport. As P.G. Belliappa, steward and former chairman of the club, says, "This is an asset to any racing club because owners who gamble see money in every race and so there's a high risk of them taking to crooked ways of making money. The women have been highly successful and seem to have recovered the cost of the horse as well as its upkeep."