Buddhism, war...the links go back centuries, yet we haven't settled into neighbourly familiarity 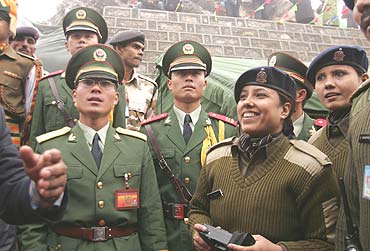 outlookindia.com
-0001-11-30T00:00:00+0553
Nearly six decades have passed since India and China emerged as modern nation-states: in August 1947, India's 'tryst with destiny' was proclaimed over and its leaders set about to redeem the 'pledge' they had undertaken. Roughly two years later, in October 1949, the Chinese people 'stood up' to establish the People's Republic of China. It was thought to be the beginning of two new dreams, a stirring to life of two nations. It seemed Nehruvian socialism had found a partner in the Chinese, that both were ready to commit to a serious relationship, primarily based on a common 5,000-year ancestry.

This grandiose expectation was soon dashed at the outbreak of the Indo-China war of 1961. What followed were nearly four decades of frosty relationship, marked by mutual suspicion and mistrust. The tide began to turn in the '90s; it gathered a certain momentum in the new millennium. Simultaneously, as both India and China busied changing themselves, there was a sudden surge in debates, discussions and prophecies regarding China and India. The two became the new buzzwords in globalspeak. It's in vogue now to project them as future superpowers who will claim the 21st century as theirs.

Are these pipe dreams? Will their fabulous economic growth speed them into the exclusive orbit of the powerful? Assistant professor at the University of Macau, Dr Hari Venkatesan, accepts there is increasing recognition of the "rise of China and the emergence of India". But this, he argues, could be "motivated by the potential profits they have to offer" to those according them such recognition.

Venkatesan says both India and China need to resolve pressing problems before they can aspire to an exalted status. "For China, improving guarantees to intellectual property, making room for private enterprise and creating space for innovation that would result in 'made by China' as against simply 'made in China' are of primary concern. For India, developing infrastructure coupled with empowering the masses should be the highest priority. Urban standards of living, in India, are badly in need of improvement as well," he points out.

Cooperation, and not rivalry, should drive the India-China relationship as the two strive to become economic superpowers. The recent reopening of the Nathu La Pass is a case in point. Opened on July 6 to mark the Sino-Indian Year of Friendship, this ancient trade route had largely remained shut in the past half century, barring the odd postmen who had the right of passage. At a fantastic height of roughly 14,000 feet, it now boasts of the world's highest internet cafe and ATM facilities. Hao Peng, vice-chairman of the Tibetan Autonomous Region, stated, "The reopening of border trade will help end economic isolation in this area and play a key role in boosting market economy there." Quite evidently, hardcore market economics has prompted the recent thawing in bilateral relations. The bilateral trade volume between India and China recorded $18.73 billion in '05, according to the Chinese ministry of commerce.

India needs to deepen economic cooperation with its neighbour before it can hope to become, like China, an engine for the global economy. Jan Klawitter, the event manager of 'China Mining', the Chinese ministry of land and resources' annual congress held in Beijing, says, "India most definitely is attracting attention, both in China and globally. But the perplexing fact is the amazingly low amount of participation from the subcontinent, in this premier Asian mining congress, especially given its proximity to China. In light of recent developments such as the Mittal-Arcelor deal, I'm hoping this will change."

India's advances in software technology are held in very high esteem in China. The reputation of Indian software companies based here is soaring. "The scope of cooperation in the field of software and IT is immense and has not been realised to its fullest capacity yet," says Geoff Yu, software engineer and senior manager in a leading IT multinational in China. "India has definitely been leading and China can learn a lot from India. The future lies in cooperating and forging ahead together, as Chinese hardware technology is pretty advanced."

With improving bilateral relations and ample opportunities for trade and commerce, there is a steady rise in human traffic between these two economies. Last year, on my way back to China from India, I met a Chinese businessman, at the New Delhi international airport. He told me he was supposed to be on a two-month visit to India, but cut it short to just two weeks. He then launched a tirade about India's backwardness and I tried maintaining my Gandhian calm. These sentiments are increasingly common among certain sections of the Chinese business community who are traveling to India.

For the Chinese, India still evokes images not related to trade and commerce. Listen to what Zhang Lin, a young executive in one of China's largest state-owned travel agencies, the China Travel Service, has to say: "I hear India can be somewhat chaotic and unsafe, nonetheless, it is a hugely attractive tourist destination for the Chinese, especially because of its ancient history and culture. I'm personally a major fan of yoga and would like to go to India and spend some time learning it. And my dream is to go and see places like Hampi."

In contemporary China, among some of the disparate stereotypical images of India such as Buddhism, curry, software technology, Tagore and yoga, Bollywood is extremely popular. For instance, I'm speeding down Changan Jie or the Avenue of Eternal Peace towards the Tiananmen Square in a taxi. A conversation with the driver ensues:

Taxi driver: Where do you come from?

A: No! I'm from your neighbouring country, to the southwest.

That's the taxi driver's version of the title track from Raj Kapoor's 1951 film Awara, popularly known as Liulanzhe (Vagabond) in Chinese. For anyone who has spent some time in China, it isn't at all surprising to find, even today, what a profound impression the character of the little vagabond epitomised by Raj Kapoor has had on certain sections of the Chinese population. One can still break ice by singing a few lines like Awara Hoon (i.e. Awalagoo...ooo)! It's quite enchanting to find people joining the refrain.

Even Vikram Seth experienced the Raj Kapoor phenomenon two decades back, as a student in Nanjing University, China. "It comes as a shock to me sometimes," he writes in From Heaven Lake, a book on his travels in China, "to hear it (the Awara theme song) hummed on the streets of Nanjing.... No sooner have I begun (singing) than I find the musicians have struck up the accompaniment behind me: they know the tune better than I do."

Hou Wei is a young singer and music teacher. She has been an avid follower of Bollywood music, ever since she was a child. A complete autodidact in the Bollywood musical genre, she speaks of Lata Mangeshkar and Asha Bhonsle as if they were her childhood buddies. She says, "I spend hours on the internet researching Bollywood songs and downloading them. Then I have to find the romanised lyrics to these songs." She has been singing professionally at an Indian restaurant, Chingari, for nearly two years now. "I'm now often invited," Hou says, "to sing at other Indian gatherings. Thus I've been able to make many Indian friends and recently had a chance to visit India as well, where I bought a harmonium. I'm planning to live in India to learn classical music. My ultimate goal is to start a school for Chinese kids to learn Indian music," she explains. 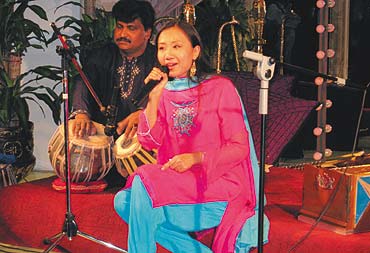 Singer and Bollywood enthusiast How Wei at an Indian gathering

Zhang Tongdao, associate professor of Media Studies at the Beijing Normal University and a documentary filmmaker, is not so excited about Bollywood. He is more interested in films like the Apu trilogy. "It's a pity that very few Chinese people know about this genre of Indian films. And as far as filmmaking is concerned, both India and China have a long way to go before they can catch up with recent developments in the West." To this, he adds, "From whatever I know of Indian films, in order to succeed internationally, they need to find a middle ground to balance art and commerce. The same goes for Chinese films." The change is necessary because, Zhang feels, the current international craze for Chinese martial art epics and Bollywood musicals won't last long.

Amartya Sen has written at length on China in his book The Argumentative Indian. Tracing cross-cultural relations in the first millennium, he mentions Yi Jing, who introduced and advocated certain Indian eating habits among the Chinese, on his return from India. These days, Indian restaurants are proliferating all over China. There is at least one in every city. Beijing itself has half-a-dozen restaurants that specialise in Indian cuisine. An extremely popular Indian eatery at the heart of Beijing's central business district called the Taj Pavilion even won the annual Best Restaurant Award, given by one of the city's leading entertainment guides.

Bai Feng, a pioneer of the Hou Hai (a lake area in Beijing) bar and restaurant boom and a connoisseur of good food, says he doesn't like the regular Indian fare, which is on offer in Beijing. "This other day I was watching a TV programme on Indian food. And I was astounded at the myriad cuisines, especially the vegetarian stuff." He goes, "Drool! I hope someone starts catering to this soon. Otherwise, I'll have to take the initiative myself. Surely I need to make a trip to India soon."

The slogan of Hindi Chini Bhai Bhai has come a long way and is certainly entering, as one journalist recently put it—a Hindi Chini Buy Buy phase. In the light of the remarkable amount of global attention focused on these two nations today, one can only hope the plot doesn't turn into Hindi Chini Bye Bye!

(Atish Ghosh is a freelance writer based in Beijing.)

From WACA To Wagah