Even the most cynical of souls will smile at this "juvenile" fairytale. 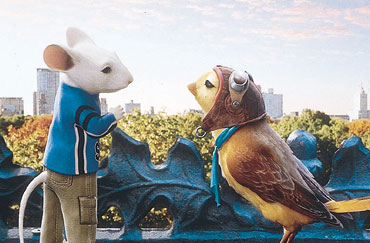 Put a little love in your heart...the world will be a better place for you and me...." The opening ditty of Stuart Little 2 sets the tone: it's an impossibly cheerful and hopelessly optimistic universe in which even the most alarming situations never seem threatening, because you know that all will not just end well, but very very well. Since we met him last in Part 1, Stuart has grown up to become a football buff with his loyalties resting firmly with Brazil, is proud to be part of the soccer team, he goes to school in his own car and also nurses a massive crush on the charming bird Margalo, who literally falls from the sky on to his car seat. The film can send any kid's imagination soaring skyhigh as Stuart flies his little aircraft or goes down the kitchen drain to search for his mother's lost ring. The adventures get more action-packed as he traverses through New York with the reluctant house cat, Snowbell, to rescue Margalo from the villainous Falcon. The final battle in the sky with Falcon makes for some edge-of-the-seat animation.

The most adorable character, however, is not the mouse with the big heart, but the Persian cat with an attitude, Snowbell, who easily gets scared by a little bird, who has a "strong stomach but a very weak heart". And who comes up with some inspired one-liners. Like when he tries to subvert the never-say-die spirit of Stuart by telling him to give up: "If more people gave up there'll be fewer wars." Stuart too has his witty moments. Like this query: if every cloud has a silver lining, wouldn't it be making it "kinda heavy". In fact, each of the animated characters has a very well-defined personality, which is not just a creation of the visual effects but of the weighty voices that bring them alive. Nathan Lane is excellent as the voice of Snowbell with Michael J. Fox (as Stuart's voice) and Melanie Griffith (as Margalo) following close behind.

The over-arching theme is that the "meek shall inherit the earth". Stuart dislikes the fact that his over-protective mom does not let him go out on an adventure and he has to remain content with safe pursuits like painting and theatre. The film has a message for anyone like him who looks and feels small, who thinks he lacks bigness to accomplish things: "You're as big as you feel...Spread your wings and sour." No doubt, it can be a perfect escapist fare if you're riddled with self-doubts and is fairly delightful even though you know that the reality outside the 70-odd minutes is not so rosy. Even the most cynical of souls will smile at this "juvenile" fairytale. As for the kids, it's a delightful Diwali treat all the way.