Strum In A Teacup

But for the rare photographs, the book is merely popcorn profiles and cheesy chuff on artistes, so popular with publishers these days. 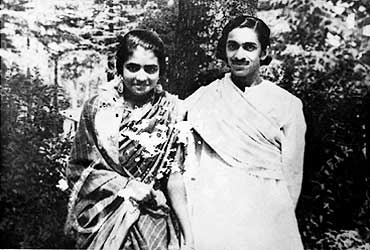 An Unheard Melody: Annapurna Devi—An Authorised Biography
By Swapan Kumar Bondyopadhyay
Roli Pages: 208; Rs 295
There are many who fit the tag of Lady in White— the late Meena Kumari, Lata Mangeshkar, Kishori Amonkar, each with an aura of mystery and enigma. But none matches up to the ephemeral persona of Annapurna Devi (78), the legendary teacher and player of Surbahar—the only female instrumentalist of genius in the Indian classical pantheon other than the commanding figure of Veena Dhanammal.

The air of tragic melancholy that envelops her persona is primarily as the jilted first wife of sitarist Ravi Shankar, which traumatised her into a self-flagellatory withdrawal into her own intensely-guarded private space from which she has not emerged for four decades.

For nearly half-a-century, Annapurna Devi’s existence has signalled an erasure: of oblivion, hushed whispers, half rumours, sly innuendo, commissioned slander and mythological accounts of musical prowess. As a member of the "first family" of Indian classical music, she occupies the same space in the Maihar-Senia gharana as her father Ustad Allauddin Khan, brother Ustad Ali Akbar Khan, ex-husband Ravi Shankar and son Subhendra Shankar. There is much in her life and circumstance which could have been material for constructing the pathology of our performing arts, so chronically stuck in feudal attitudes, cant and egotism.

It’s important to turn a critical eye on the Frida Kahlo syndrome, whereby female artistes extinguish themselves in favour of their more ambitious male partners. The stories of Annapurna Devi or Amina Kar or Sunayani Devi, which are today but sub-texts of Indian art, await a political inversion to transform them into mainstream narratives that expose art practice here. These are voices that need "political" framing rather than being packaged as products of personal peeve.

In this light, Bondyopadhyay’s book is more than disappointing. But for the rare photographs, the book is merely popcorn profiles and cheesy chuff on artistes, so popular with publishers these days. It represents editorial abdication at its worst.

Of course, there are insider glimpses: like the fact that she conducts her famous classes usually after midnight; or that she was taught driving by her student Hariprasad Chaurasia; or that she initiates each student in Raga Yaman first and thereafter according to each one’s individual temperament; or that she has never possessed a passport in her life; or even that she got married a second time in 1982, in a registered ceremony, to her student Rooshikumar Pandya, 13 years her junior.

Being an "authorised biography," the book reconfirms the old gossip of Ravi Shankar prohibiting her from performing in public to save his own place at the top. But there is no "contentious" material in the book that can be confirmed and no one says anything on record. As a result, it remains a sketchy, speculative, tendentious and tart narrative. Add to this, some atrocious typos—including Uday and Subhendra Shankar’s year of birth—and you are left with a tatty feeling.

The most valuable nugget one can salvage here is Annapurna’s remark to her student, the flautist Nityanand Haldipur, in response to his unstated desire to listen to her riyaz. "Riyaz is a private thing. It is like taking a bath. You wash yourself and remove the dirt from your body and make it clean. No one has ever heard my riyaz." Wow!

One wishes her life had continued to speak through the fragrance of her unheard music rather than the unpleasant odour from an incompetent "biography," which merely whips up a strum in a teacup.