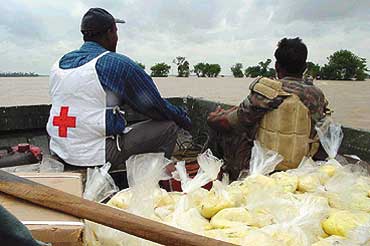 outlookindia.com
-0001-11-30T00:00:00+0553
In Orissa, antediluvian is a paradoxical term, for it describes the post-flood situation—primeval darkness engulfing the last rays of a civilised world. And after the flood comes the slow death. Orissa's worst flood since Independence has subsided but it leaves behind a trail of death, destruction and excruciating suffering, very difficult to put in words. At last count, no less than 30,827 people were suffering from diarrhoea, jaundice, malaria and gastroenteritis. Reports of death due to the rapid spread of these diseases, almost like a killer outbreak, have also begun trickling in gradually—31 people have already succumbed to diarrhoea and 10 to malaria.

While Jajpur district is the worst affected, Balasore, Kendrapada and Jagatsinghpur are also badly hit. Though as many as 222 medical teams have been deployed in the affected districts, they are helpless given the scale of the tragedy, which has once again threatened to wipe out the last traces of civilisation, held together by a tenuous thread, in this state where natural calamities have become as natural as change of seasons. One state government went down after the cyclone; the new one too is now faced with a tide of criticism over the poor relief and ineffective disaster management.

The victims of the flood are slowly returning to broken homes, rotting crops and the stench of dead cattle. Almost all drinking water sources in the affected areas have been contaminated—26,512 tubewells and hundreds of dug wells, tanks and other rural water supply schemes are damaged or defunct. Nearly 10,000 livestock perished—washed away by the waters. And their carcasses pose a danger to the living, in a chilling replay of the aftermath of the cyclone. The lives that were being built back painstakingly after the devastation of the cyclone of 1999 have once again been shattered.

And though the rivers are receding, a groundswell of criticism for poor disaster-preparedness and unscientific water management is building up. The monsoon session of the assembly has already seen stormy debates over the state government's wait-and-watch posture even as 8.49 lakh cusecs of water was released from the Hirakud reservoir on July 17. This decision was taken when the Mahanadi was already in spate and it caused large-scale devastation in the coastal districts.

Whatever the rights and wrongs of the issue, it is obvious that the government had no clue about the inflow and outflow of water into two of the state's largest dams, the Hirakud and the Rengali. Neither is there a system for monitoring the amount of rainfall in river catchment areas. There has been a demand for setting up a high-level committee to study the problem and for creating a separate department to deal with natural disasters. But it is doubtful whether this would improve matters—a Rs 52-crore project for disaster-preparedness, mooted after the cyclone, is yet to take off because of lack of funds. The critical economic situation of the state government has left it crippled with barely any funds for welfare work, much less to rebuild a shattered economy.

Meanwhile, the government has announced a package for flood-hit farmers to revive the affected agricultural sector. A 50 per cent subsidy has been announced on the sale of seeds for the rabi season and for the kharif in 2001, for the drought-hit. The farmers will be provided vegetable seed mini-kits at subsidised rates. Subsidies will also be provided for pesticides, sprayers, paddy seedlings and fertilisers. An additional 148 seed-sale centres will be opened in the affected areas and free transport of seedlings to deficit areas will be made. Repayment of kisan loans has been extended to three years and a short-term loan scheme of Rs 92.72 crore has been approved with help from nabard.

But what is needed is a long-term intervention programme for restoration of the environment, including strengthening of river embankments, restoration of forests and desalination and treatment of sand casting of agricultural land in the region. This cluster of issues will have to be addressed before farmers can avail the facilities under the government's package. Meanwhile, the additional Rs 200 crore promised by the prime minister for food-for-work programmes will help sustain the population if restoration and repair of infrastructure and water bodies are taken up immediately.

Given the government's record in the post-cyclone period—the Comptroller and Auditor General has rapped the then government severely for large-scale irregularities in distribution of relief and poor utilisation of funds—there is very little reason to be optimistic. It will be a long and costly road to rehabilitation.