The US as peace guarantor mollifies Sinhala sceptics 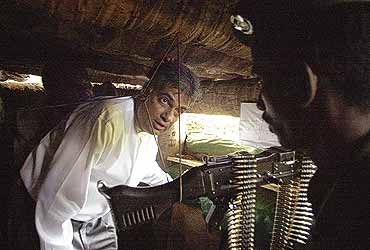 outlookindia.com
-0001-11-30T00:00:00+0553
When Uncle Sam parachutes into a country and begins dabbling in its internal affairs, the more politically savvy of the populace tend to look askance, wondering what the cost the interference from the world's only superpower might entail. But Washington's decision to become directly involved in the peace process in Sri Lanka has sent a frisson of hope in the beleaguered country struggling to emerge from the 18-year-old ethnic conflict.

The dominant sentiment here is that Washington's role in Sri Lanka is a boost to the peace process. For one, it allays the majority Sinhalese community's fear that the LTTE could exploit the ceasefire, as it has in the past, to rearm and regroup. What's bolstered the confidence of the Sinhalese is Washington's veiled threat that it would extend the war against terrorism to Sri Lanka were the Tigers to break the ceasefire deal.

The signs of Washington's involvement in Sri Lanka were aplenty. First, US assistant secretary of state for South Asia Christina Rocca flew into Jaffna to meet PM Ranil Wickremesinghe who was touring the peninsula. And then Rocca declared, "We have a much greater interest this time as we feel that this is the best chance for peace in Sri Lanka. This is an opportunity for a good-news story to emerge from South Asia."

Rocca's statement was just one among the many warnings to the LTTE the Americans have been issuing. For instance, when some newspapers reported that post-ceasefire the LTTE had mounted a fresh recruitment drive and was collecting money, the American embassy here was quick to put out a statement. "In the current international context, in which terrorism is being condemned in more and more countries, the LTTE should be specially vigilant about observing the terms of the ceasefire accord. If the LTTE chose the path of peace, ended its reliance on terrorism, accepted that an independent Eelam was both unattainable and unnecessary and honoured democratic and human rights norms, the US would respond positively," the statement declared.

Says Lasantha Wickremetunga, the editor of the Sunday Leader newspaper, "The Americans are trying to strengthen the hands of the government vis-a-vis the peace process by softening the hardline Sinhala opinion that the superpower's support would be available in the war against the Tamil rebels were they to break the peace process. The downside of the American involvement is the way India would view this development."

But the Lankan government has been extremely sensitive to India's reaction to outside involvement. "India is the cornerstone of Sri Lanka's foreign policy. We've consulted India on every move and New Delhi has given its blessings," says a senior minister who claimed Colombo obtained an okay from New Delhi before the American embassy statement was made public.

Colombo has been alive to India's concern largely because of the price Sri Lanka has paid for an insecure New Delhi in the past. Worried at the pro-US stance of the late President J.R. Jayawardene, India took to arming and training Tamil rebels in the '80s, transforming the Tigers from a guerrilla outfit to one capable of waging set-piece battles against the Lankan army.

But the new millennium isn't the '80s. Not only is India courting the US, it also faces terrorism in Kashmir. It just can't oppose Washington's involvement to curb terrorism in Sri Lanka. Says Loganathan Kethishwaran of the Center for Policy Analysis, "It is possible New Delhi will allow the US the role of the guarantor for the peace process with a proviso that India's strategic sensitivities in the region are also recognised."

But US involvement has its critics. The LTTE of course condemned the statement, though in the same breath promising to take action against those who violate the truce.The Tamil National Alliance, a grouping of four moderate parties, was more outspoken: "The US government should refrain from undue interference in the internal affairs of Sri Lanka." Is this the beginning of a new divide, or mere sabre-rattling to keep the cadres happy?

Voices Over The Net