The new Striker is old news in Chennai’s slums, its carrom world champs will vouch 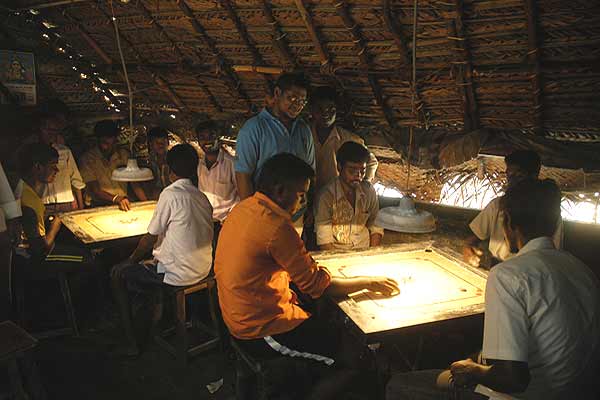 Cannes is the toast of the French Riviera, the place where Hollywood’s A-listers walk the red carpet, strutting and preening for the cameras. It’s really not the place for the humble and down-to-earth but, as they say, miracles happen, and often enough to keep us tempted. A couple of years ago, I. Izhavazhagi, the daughter of a fish cart vendor from the Slum Clearance Board tenement in Vyasarpadi, made it to Cannes, not to the red carpet, but to an event which saw the 22-year-old  being crowned world champion at the 5th World Carrom Championships. And later, after a Rs 10 lakh award from Chief Minister M. Karunanidhi, Izhavazhagi, who is still the reigning champion, went on to become, quite literally, a slumdog millionaire.

Slums can be dreary places to grow up in, there’s little privacy, no civic amenities to speak of and an inbred criminality seeps in the ground. But in and around Chennai, these very places have spawned carrom champions like Izhavazhagi for decades. The phenomenon has found a Bombay echo in the new Bollywood release, Striker, the story of a carrom champion from a slum. But in Chennai’s own woebegone shanties—whether it’s Pulianthope, Periamet, Vyasarpadi, New Washermenpet or Tondiarpet—it’s no new story. They have produced over 40 carrom supermen in the last 40 years, starting with Lazer (Chintadripet) and S. Deli (Washermenpet) who won the national championship twice in the ’70s. Then came Arjuna awardee Maria Irudayam from Periamet, who has been  world champion, national champion and  SAARC champion to boot! Two other world champs, Anuraju and G. Revathy, were also from the slums. S. Anandan, secretary, Chennai District Carrom Association, a one-time footballer who switched to carrom after a knee injury, gets the scenario down pat, “Almost the first thing that lulls a baby to sleep in these slums is the sound of a striker hitting a pawn.”

G. Vijayaraj, association general secretary, explains why carrom is so popular in the slums, even the women queueing up to fill their pots from the community taps pass the time by watching the board. “Playing cricket or any other sport in these narrow lanes is not an option,” he points out. Most players are affiliated to the clubs that mushroom in these slums, and they in turn become the cradles for budding talent.

“Almost the first thing that lulls a baby to sleep in these slums is the sound of a striker hitting a pawn....”

But it’s still largely a male preoccupation, though there are cases of women breaching the game’s top levels. “Culture”, apparently, is what stands in the way of more girls going to the clubs to practice. “Girls are shy and tend to concentrate more on their studies,” says M. Parimaladevi of Choolaimedu, the current national junior as well as sub-junior girls champion. But someone like Revathy from Periamet, whose in-laws are sports enthusiasts, found no impediment when she wanted to go the gnr Carrom Training Centre in her slum to practise their moves. And since the inauguration, last  year,  of the 4,000 sq ft Hall of Carrom at the city’s Jawaharlal Nehru stadium, all carrom enthusiasts have a place to practice. The hall also holds coaching camps, tournaments and seminars where experts explain the finer techniques of the game.

Carrom’s popularity in these neighbourhoods (over, say, most contact sports) is also explained by the fact that it causes no fractures (fingers do take a lot of strain and players are advised to exercise them constantly using a soft rubber ball) and there is no formal fee structure involved. “Not a single pai,” emphasises Anandan. Clubs do charge players (Rs 5 per game) but that’s so they can buy boards, pawns and the quintessential boric powder (which helps the striker slither over the board). 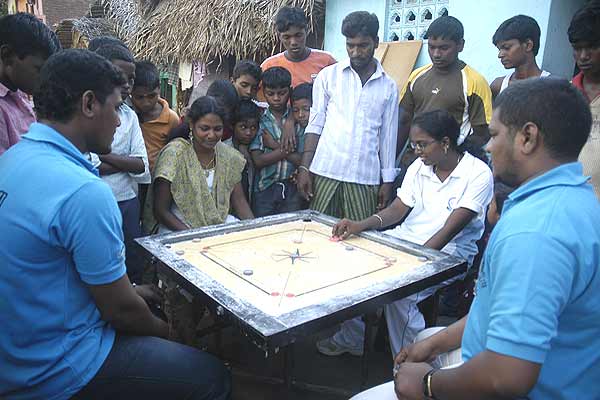 Ex-world champs Revathy and Parimala Devi at a local game

Pulianthope club-owner Suresh, shouting over the din of pawns crashing the boards in his cramped “club”—basically a terrace with a thatched roof and some lamps—says, “I don’t run this club for money but in memory of my father.” His father’s picture hangs there alongside several of late actor-turned-neta M.G. Ramachandran. There’s no doubt where Suresh’s political allegiance lies, but it’s clear that his heart lies in carrom. “This place almost never shuts down because young boys keep coming after school, college and even after work to indulge their passion,” he says proudly. One hundred and thirty such clubs are members of the carrom association, and 20 of them conduct tournaments. It’s at these that carrom players earn their spurs before going on to district, state, national, federation and world championships.

“Carrom deserves more recognition for the primary reason that India has successively produced champions for over a decade, unlike in any other game,” says R. Christodas Gandhi, former Tamil Nadu sports secretary whose intervention led to Izhavazhagi getting the funds to go to Cannes. That said, she’s the first champion to get a cheque that should be a life-changer. Others have got piffling amounts and unless their employers sponsor them, few get the opportunity to travel for tournaments.

Revathi, a former world champ, is one of the lucky ones because both she and her husband, Dominic Raj, also a former champ, have jobs with Indian Bank which they got on the sports quota. Their son Ashwin, 5, is already flexing his little fingers. “We have a small board at home and Ashwin is  showing much promise,” Revathy says.

Most players have a grouse, though—the state government has put a freeze on job recruitments for carrom under the sports quota. So even world champion Izhavazhagi has been unemployed since March last year. National champion Radhakrishnan is, at 34, still jobless. E. Mahavinayagam, a former state champ, laments, “My parents tell me I’m wasting my life. How long will you depend on carrom, they ask?”

Anandan shows trophies lining a glass case in his office and says, “Even winning a national championship does not translate into prize money.” This is why many carrom champions end up playing in tournaments where ‘bet money’  is a factor. “What is there to hide when these players are not getting any financial aid?” he asks, unrepentant.