What's in a word? A fine of Rs 40 lakh , if you ask the Sena-BJP, both paying for calling a bandh a bandh. 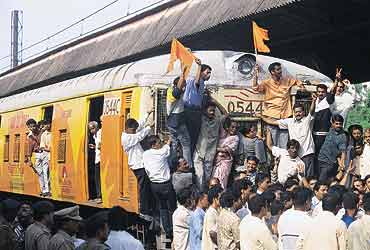 After the Bombay high court last fortnight fined the Shiv Sena-bjp for calling a bandh on July 30, 2003, political leaders, bureaucrats, liberals and wordsmiths are busy tossing these words around, hair-splitting between synonyms and attempting to understand the finer points of constitutional rights and guarantees. The next time round if Shiv Sena chief Bal Thackeray wants to call a bandh, he might merely switch words and call for a general strike instead.

Chief Justice A.P. Shah and Justice S.U. Kamdar held that the bandh—called to protest the Ghatkopar bomb blast on July 28 last year—violated fundamental rights of Mumbaikars and was a "fit case to levy exemplary damages" of Rs 20 lakh each on the Shiv Sena and the bjp. The money is to be channelled into an independent fund and used by the state government to improve public facilities and services in the city. The judges rejected the Sena-bjp argument that the bandh was a spontaneous reaction to the terrorist attack and was supported by other political parties and groups. The Sena and the bjp decided, within minutes of the judgement, to appeal in the Supreme Court. They have time till the third week of September to approach the apex court for relief.

The judgement clamps down on one of the most basic activities of the Sena, which indulges in a bandh at least once a year, if not more, to reassert its supremacy over Mumbai. To a Mumbaikar, a Sena bandh is a holiday on his calendar, whether he wants it or not. Those who don’t know what a Sena bandh means find out as soon as they step out of their homes—suburban local trains that carry six million commuters a day grind to a halt, so do all forms of public transport, while shops, cafes and restaraunts uniformly down their shutters. Schools and colleges remain closed. A city of 14 million people is held to ransom by a few thousand men.

The force, coercion and threat, often the use of violence to browbeat those who do not fall in line, provoked eight men to knock at the doors of the Bombay high court with a public interest litigation after last year’s bandh. Four of them are big names in the city—former cabinet secretary B.G. Deshmukh, ad guru Alyque Padamsee, former top cop Julio Ribeiro and actor-activist Gerson da Cunha. Four others are daily-wage earners whose livelihood was jeopardised that day—rickshaw driver Ayub Khan, motor mechanic Vinod Kumar, shop attendant Sabit Ali and security supervisor Sanser Singh.

For a city that saw its first bandh in 1908 when textile and manufacturing industry workers spontaneously struck work, took to the streets and paralysed all movement to protest Bal Gangadhar Tilak’s conviction in a sedition case, the high court judgement was welcomed but with great caution. There are those delighted with it, and others who see it as a flawed piece of judicial activism. Citizens have welcomed it but political parties and trade unions of the Left and Right see the judgement as an attack on their democratic and constitutional right to collective action. In Delhi, the CPI(M) lodged a protest against the ruling while in Mumbai Bal Thackeray said, "These worthy gentlemen have taken the issue to court, these worthy gentlemen should now tell us how to protest."

Says da Cunha, "We are not opposed to political protest or workers’ right to strike. These are constitutional rights. What we are opposed to is the coercion and violence inherent to a bandh. The judgement is significant because it does not merely do finger-wagging, it fixes responsibility on and holds accountable those who call a bandh for the economic loss and damage." Adds Yogesh Kamdar, national vice-president, PUCL, "A bandh means the bandh enforcers take the entire city as hostage. How can civil society allow it?"

The Sena, say political historians, picked up rudiments of cadre organisation, sloganeering and the nuts-and-bolts of a bandh from the Left, particularly from fiery trade unionist Comrade S.A. Dange, but they forgot to learn a basic lesson from him: non-violence. "The Sena forgets that Dange was not violent. A bandh where all civic life is forcibly disrupted, civil rights are suspended, people are threatened and stopped in their day-to-day activities is like a civil emergency. How can it be tolerated? That’s why this is a landmark judgement," remarks former municipal commissioner S.S. Tinaikar.

However, this argument does not impress trade unionists who see the Kerala judgement and the latest Bombayhigh court judgement as a concerted and steady attack on the rights of workers and unions. They see in this curb on bandhs a larger pattern in which democratic institutions are themselves infringing or curtailing democratic rights of citizens. "Bandhs and hartals are a long tradition of civil disobedience in India. Banning them is an unwarranted incursion into the democratic right to protest," says Vivek Monteiro, secretary of the Maharashtra citu, "If there is violence during a Sena bandh, there are laws to contain it. Because there is violence during certain bandhs does not mean bandhs should be judicially stopped."

Other union leaders too labour the difference between a bandh and a forced bandh or bandh with violence. Civil liberties activists also stress on the fine differences. Says Justice (retired) Hosbet Suresh, now a well-known civil rights activist, "This judgement is not based on the sound principle of law and I don’t approve of it at all. Who has defined bandh? The judges themselves. The new edition of Oxford Dictionary has included bandh and defines it as a general strike. The Supreme Court has said a general strike is permissible because a general strike does not imply force or complete closure. Equally important, how did the judges decide on Rs 40 lakh because the petitioners had asked for Rs 50 crore and now this money will not even go to those who lost their day’s earnings on July 30. This is a fundamentally flawed judgement."

Strong words but they point to a fundamental mix-up on the issue. The right to protest does not equate with the right to coerce others into that protest and indulge in violence. It is the element of violence that had da Cunha and others approach the court, it is the clamping down on coercion and violence that people like Tinaikar welcome. Neither of them wants the right to protest revoked. But the inherent possibility of backdoor revocation rings alarm bells for the Left and unionists.

The one positive outcome of the judgement everyone is agreed is that the government had no option but to file an affidavit stating how it should, and would, handle mass protests. The action plan includes preventive arrests, large-scale protection to property and lives, and video recording of incidents to identify those who indulge in criminal activities. Ironically, none of the cases registered against Sena miscreants on July 30 last year have moved an inch towards their trial.

The judgement may not mean the end of the "total shutdown" in Mumbai, it only means that the parties cannot openly enforce such a closure and cannot call it a bandh. And, it has taken the business of verbally defining bandh from the hallowed portals of linguists and wordsmiths into the corridors of the courts. Taken together with the Kerala high court order banning bandhs and the Supreme Court’s decision to uphold that order, the Mumbai judgement could mean that any total shutdown hereafter, if it happens, will have a different texture and feel to it. And, a different name.

For A Few Drops Of Mercy