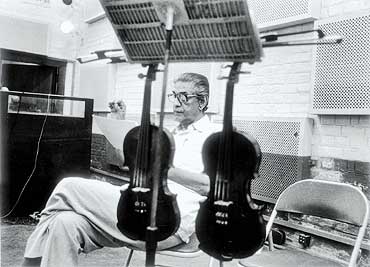 outlookindia.com
-0001-11-30T00:00:00+0553
Historically, Indian performing arts, whether the folk forms or the classical forms, have always had music. Even our silent films were accompanied by music. There used to be musicians playing live in theatres; they didn't just play instruments but also sang along. So our silent cinema, too, boasted of a soundtrack.

When sound finally came to celluloid, songs became integral to Indian cinema, more so because they were central to the Parsi-Urdu theatre from which our cinema emerged. When you were telling a story, you got the story to move forward by linking it with songs. You used songs as an interlude between dramatic sequences so that you could pause and take a breath. Songs also became a comment on the interiority of characters, helping to interpret their inner states. A boy and girl fall in love and express that feeling in the form of a song. Music also became vital to highlight dramatic action. A scene was underlined by music, a bed of music was spread under the sequence. These became the norms for the use of music in our films.

Satyajit Ray introduced yet another concept: thematic score. He always worked on a musical theme. It gave an emotional, and often cerebral character to the narrative. Take Ravi Shankar's score in Pather Panchali; the moment you hear that theme, you recall the film in the strongest possible way. The concept of thematic score was also being evolved elsewhere in the world in certain kind of films, in certain places. Ray was the first to use it in India, he did it in film after film.

The level of cinematic sophistication increases when you start evolving musical themes. They represent the character not only of the story but also of the situations around which it is structured. Pather Panchali has a pastoral score, the music is very melodic, beautiful. The way it starts in the film is as an accompaniment to a descriptive sequence about early morning in a village with a family—mother, father and the girl. Eventually it moves into the room—the girl looks in from the outside, the little boy is asleep, she tries to wake him up, then there's the focus on his eye. The theme introduces us to these people in a way that sets them up for the story. This is a happy, charming moment. You know your relationship with this family will be one of warmth and compassion. How did that happen? The music did that for you. Practically nothing is said.

The refrain keeps coming back in the film. It sometimes has an ironic relation with the events that are taking place. Eventually, it encompasses the pain and dislocation of the family. The sister and the old lady die, the family leaves the village, a whole bunch of life's memories is left behind. Music gives depth, meaning and insight into what's happening.

Ray was able to accomplish all this because his knowledge of music was immense. There was Rabindra Sangeet, but he also listened to a lot of Western classical. He learned to read scores, studied harmony. Musical ideas always played in his head. Initially, he wasn't sure of composing music himself, so he got Ravi Shankar. He composed the most memorable score for any Indian film ever in Pather Panchali.

Ray brought many talents. Ravi Shankar and Ali Akbar Khan were not top, world-famous musicians when he used them. They were making a name for themselves as jugalbandi players, and had done their first trip around the world. The world was opening up for them and they were taking Indian classical music to the world. Ray used Ravi Shankar for the sequels as well, because he needed him to maintain a certain family character in the entire trilogy. Then, he got Vilayat Khan for Jalsaghar and Ali Akbar Khan for Devi. Later, with Teen Kanya, he began composing his own music, and he did so until his last film. Each of these films had a significant, distinct theme.

Ritwik Ghatak, Ray's contemporary, was also knowledgeable about music. One of the titles of Ghatak's films was on a musical note—Komal Gandhar. His use of music was also thematic. There's a basic principle about film music, that a film has two spaces—the visual and the sound space. Both must receive equal importance. A filmmaker would be wasting sound space if he didn't make proper use of it. Even silences are vital. This awareness started with Ray and Ghatak.