A liberalism that's just a facade, subsumed under the Hindutva umbrella 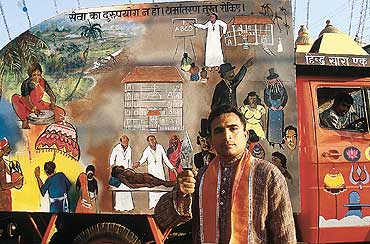 The Saffron Book
By Prafull Goradia
Contemporary Targett Rs240,Pages:327
This saffron book, which is, in fact, a collection of letters by an Indian businessman, is the most candid spelling out of the inner contradictions of Hindu nationalism. The aim of the author is to promote nationalism because it is the precondition to any collective mobilisation for modernising India and asserting its strength in the world. Goradia is, thus, obsessed with national unity which implies "reconciliation" with Muslims.

Yet, he displays his anti-Muslim prejudices without any reservation. This admirer of Savarkar—whose books he read when he was 19—harks back to the old notion that "the Hindu psyche was traumatised with the impact of Islam". He admits that "one should not wallow in the past", but he cannot help dwelling on the innumerable destructions of temples. While the Hindu "is pathologically averse to violence"—as the communal riots of the last 15 years have amply demonstrated!—"the Muslim learns to use the knife, as it were, from the beginning...and is therefore prepared to resist and survive."

Here is another contradiction: the Muslim can only be stigmatised for all his misdeeds but he may be a role model too! And the Christian as well. In the most personal letter of the book, Goradia tries to dissuade a Hindu lady from marrying an Englishman in too much hurry because "being an Englishman" he cannot understand "an Indian faith". But in the same page he draws his definition of love from Francis Bacon! The ideologues of Hindu nationalism such as Savarkar and Golwalkar have done the same: their notion of "cultural nationalism" was explicitly borrowed from European writers.

Interestingly, the uniform of the rss is adapted from the British police. They could not strengthen the Hindu society except by imitating the dominating other. Goradia says it plainly: "It is time we pulled ourselves together and explained ourselves to the others in their own idiom." This is what I've called the strategy of stigmatisation and emulation of "threatening" others which found expression, for instance in the Hindu nationalists' attempt at endowing their religion with a church-like structure through the Vishwa Hindu Parishad: Hindutva is not Hinduism but a semitised creed.

But, of course, Goradia claims that Hindutva is Hinduism and even that it is India—this is the third contradiction of his book. For the author "Hindu, Bharatiya or Indian" is all the same. In fact, "the Hindu universe extends to all living beings including animals, birds and reptiles" and he even wonders if the soul of his mother "has not gone and settled in the body of, say, a Muslim child". If not because of reincarnation, Muslims are Hindus because their ancestors were Hindus who got converted. Muslims, therefore, are welcome to look at themselves as Hindus. This is the great tradition of Hindu tolerance that Goradia finds so moving: Muslims can follow any creed privately, provided they regard themselves as Hindus by culture—and believe, for instance, that Krishna "first personified the unity of India" as "president of the Adhaka-Vrisni league or confederation of five Yadava republican committees". The fact that many Muslims and Christians descend from Hindu converts is evident from their "collective memory" since they have not "necessarily forgotten their caste". The author explicitly assumes that one is a Hindu primarily by his caste.

While Goradia does not rehabilitate caste as such, he advocates the recognition of natural hierarchies: "Justice should be progressive and not equal because people are not equal. The karma of each soul is different; so is his or her bhagya or taqdeer". Equality is a wrong idea associated with the semitic religions whereas liberty is "at the core of the Hindu faith". But the Hindu ideal of liberty has been suppressed by a western-inspired Constitution emphasising equality which needs to be reformed according to Goradia who remains very vague in this regard. His cautious but firm reservations regarding any positive discrimination policy reflects the most commonplace plea of the urban elite on behalf of merit. He argues, in the same vein, that the State should be liberal in the realm of economy, Goradia's sphere par excellence. But swadeshi should prevail anyway!

The author's claim in favour of less equality stands in contradiction with his nationalist aim. Can one really build some Hindu Rashtra if social groups are differentiated in such a way that they feel discriminated against? It is only possible if they don't feel so, if they accept to play the role of junior partners, like the children in a joint family. It is certainly not just by chance if Goradia feels "a nation is the extension of a joint family". The conservative overtone of this organic nationalism is the last but not least contradiction of the "saffron book".

The Hindutva ideology is bound to fail if its proponents are not prepared to acknowledge the rise of those who strive for equality and are emancipating themselves.

(Christophe Jaffrelot, director of ceri, Paris, is author of The Hindu Nationalist Movement and co-editor of The bjp and the Compulsions of Politics.)