That evening where cricket, showbiz and politics effortlessly embraced each other 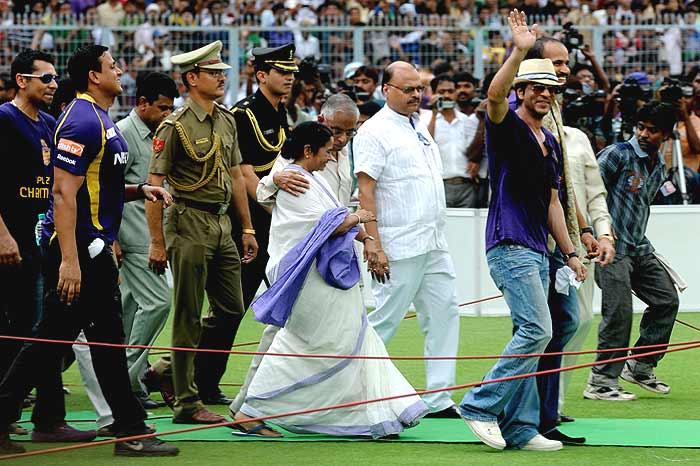 “KKR is a Bombay-based commercial entity with no connect to Kolkata. Didi is confused,” wrote Pritish Nandy on Twitter, scathing as usual. He was reacting to the city of Calcutta putting on one of its wild shows of lusty joy and exhilaration (with the help of chief impresario, Mamata Banerjee), this time to celebrate the victory of Shahrukh Khan’ s Kolkata Knight Riders in the IPL. It was a victory sculpted by a captain from Delhi, a batsman from Haryana, another from South Africa, an all-rounder from Bangladesh and a bowler from Trinidad. Even the two Bengal players, Manoj Tiwary and Lakshmi Ratan Shukla, contributors to KKR’s victorious run, were from Hindi-speaking families settled in Calcutta.

But neither Mamata, nor the 1,00,000 people who crammed into the Eden Gardens on Tuesday for an impromptu session of singing and dancing, could care less. A sports-crazy city, Calcutta is known to go overboard with celebrations, with the FIFA football World Cup dividing the loyalty of Calcuttans between Argentina and Brazil. So, over the top or not, the city, which has had few reasons for merriment of late, shook its hair down, and braved the soaring mercury and humidity for a few hours of madness. Typically, it ended with the police wielding the lathi, prompting a wisecrack on Twitter: ‘Didi, lathi aar Manush’, a spoof on Mamata’s signature motto of ‘Maa, Maati aar Manush’.

“Politicians would want to ride any popular wave that would help them remain in the public consciousness,” explains sports commentator Mudar Patherya. Pointing out that “forty years ago sports was by and large free from political influence,” he feels what ended the virginity was India’s winning the cricket World Cup in 1983. 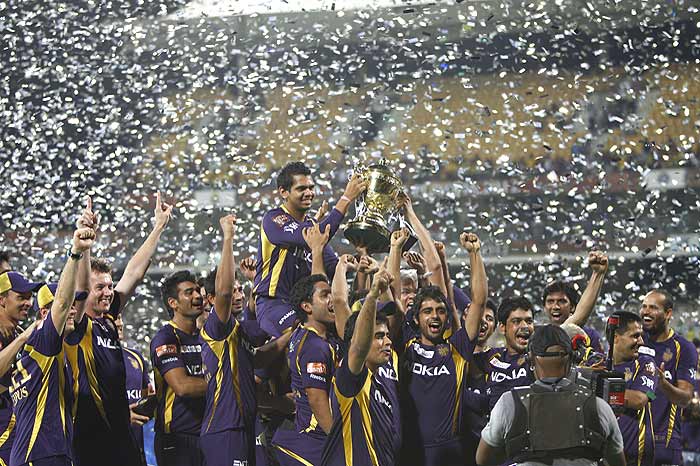 KKR with the IPL trophy

“Politicians realised that to be associated with sports would provide them with endless opportunities and clout, not the least of which was monetary. Since then, we have had any number of ministers and politicians muscle their way into sports. Otherwise, how can one make sense of Sharad Pawar, who possibly never held a cricket bat in his life, heading the BCCI as well as the International Cricket Council? What is happening in Bengal now is, therefore, not something novel or unique.”

Whatever Mamata’s stakes in KKR or SRK, she didn’t seem to mind it a bit when King Khan hugged her on stage.

Conspicuous by his predictable absence at the celebrations was Sourav Ganguly, the former KKR and India captain. Ganguly was perceived to be close to the Left Front, which had allotted him land for his cricket academy. Mamata’s government was quick to cancel the lease. Indeed, the decision of Shahrukh to dissociate with “dada”—brought upon by a fractious team chafing at his controversial leadership—was said to be partly influenced by Didi’s hostility to one of West Bengal’s enduring poster boys.

While the Left has been quick to criticise Mamata for wasting public money on the celebration (gold chains, sweets et al for the team), the criticism has been muted, possibly in view of the mood of the masses.

“This is because the mass reaction to the ceremony is very different from the reaction of the English-speaking middle class. For the common populace, which turned up in their tens of thousands to line up along the streets and fill up the Eden, the entire event was a spectacular success,” says a journalist. No wonder then that there are only cautious pointers from the CPI(M) camp.

When contacted, CPI(M)’s Mohammed Salim claimed that a cricket craze was being fanned, “It must be remembered that the IPL is not about local or national pride. It is club cricket involving national and international players. And it is not merely about the game either. Yes, a few games are being played but behind the scenes it is really about money, power and entertainment. It is about sponsorship and branding.”

On the other hand, there is Shahrukh Khan. He has been made brand ambassador for a reason. Actually, for several reasons. For Mamata Banerjee, he is many good things rolled into one. First and foremost, he is the owner of a team with a name like Kolkata Knight Riders, which, as she recognises, has immense brand value. Shahrukh also has mass appeal. And another thing—he possesses a Muslim name. Whatever the stakes for Mamata Banerjee in the IPL, KKR or SRK, she did not seem to mind one bit when King Khan, undaunted by the chief minister’s diffident refusal to break into a dance with him, hugged her on stage and affectionately planted a kiss on her head. One Facebook message read: “Shahrukh Khan kissed Didi. Will he now be branded as a Muah-ist?” That thought would not have occurred to her.

But, as Calcutta recovered its breath, people were left wondering what Justice (retd) Markandey Katju, the Press Council chairman, would make of it. An avowed Mamata fan, Katju described cricket as the opiate for the masses. She appears to have been fast on the uptake.