English bespeaks progress. India’s youth is much the worse without it. 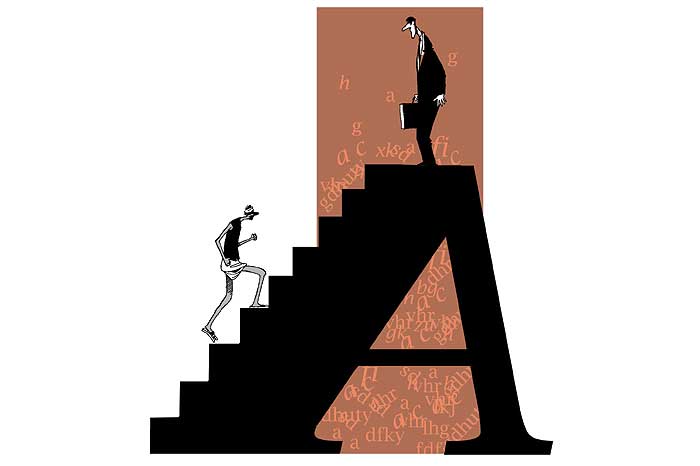 Our obsession with the English language has served us brilliantly. It has kept us united as a nation; it has contributed significantly to the social mobility of Indians; it has been a major factor in our recent success in the global economy. One of the cheerful things happening in India is the quiet democratising of English. Dalits are today its biggest advocates because English allows them to work in call centres and other modern jobs, where there are fewer caste barriers. A recent survey in Mumbai shows Dalit women who knew English rose economically by marrying outside their caste—31 per cent of Dalit women who knew English had inter-caste marriages and rose economically, but the average figure for this category of mobility in the community was just 9 per cent. Dalits identify our regional languages with caste oppression. Hence, Dalits across the country hailed Mayawati’s decision to introduce English from the first grade in UP. (That there aren’t English teachers is another issue!)

The linguist, Peggy Mohan, likens social mobility through English to the mobile phone. Just as the masses today are leapfrogging to cellphones without going through a landline stage, Mohan thinks that English will evolve from an elite to a mass, second language of the new Indian middle class. If the pre-literate, dialect stage is not to have a phone, and learning a standard regional language, say shuddh Hindi, is to acquire a landline, then aspiring Dalits at English schools will actually leapfrog from their phoneless (pre-literate) stage to mobile telephony (literacy in functional English).

UP is also a crucible where one can observe the social mobility of Muslims. Mulayam Singh Yadav shares a distaste for the English language and computers with many Muslim clerics. Because he lost Muslim support after his bear hug with Kalyan Singh, he decided to win Muslims back with an anti-English crusade. This strategy backfired, however, for young Muslims find English and computers are the route to good jobs—minority employment in the it/ites industry is 12 per cent, compared to less than 4 per cent in other sectors. It escaped Mulayam’s attention that every mofussil Muslim mohalla and qasba in UP has small, private English medium schools catering to artisans, rikshawallas and reriwallas.

Since the nineties there is a new, quiet confidence in our nation, and our attitude to English has also changed. It has become an Indian language. Unlike my generation, today’s young are more relaxed about English and think it a skill, like learning Microsoft Windows, and comfortably mix it with their mother tongues. When they speak English, even if inaccurately, they feel that they own it.

I do not agree with critics who claim that we have created a rootless elite which has lost the ability to think because it does speak any language well. I went to an English medium school and work mostly in English, but Hindi is my street language. Even though I do not read Hindi newspapers or novels, I have spent the last six years reading the Mahabharata. There are millions of Indians like me, who balance our language of empowerment (English) with our language of identity (Indian).

There is thus no danger of losing rich  languages like Marathi and Kannada; regional chauvinists are unnecessarily alarmed. That said, if our children had learned both English and the local languages in a lively way from class one, we would have become a truly bilingual and culturally richer nation.

There is also a problem with the way we teach language. We teach an artificial Hindi in a soulless way, which doesn’t connect with people. Bollywood does a much better job and Hindi’s popularity continues to grow. Unless we reform how we teach regional languages, they will suffer the landline’s fate.

English, too, continues to be taught abysmally and we have run out of English teachers. Over the next ten years 3.5 million jobs will be outsourced globally. India is likely to lose these jobs, according to David Graddol, author of English Next, because we are losing our “English advantage” to other countries. China is doing a far better job in training English teachers, and soon English speakers in China will outnumber those in India, according to Graddol. If this is not a wake-up call,

I don’t know what is!