K.G. Satyamurthy, author Sujatha Gidla's uncle, was a young rebel in the '46-51 Telangana uprising. In this excerpt, Satya plunges right into the struggle. 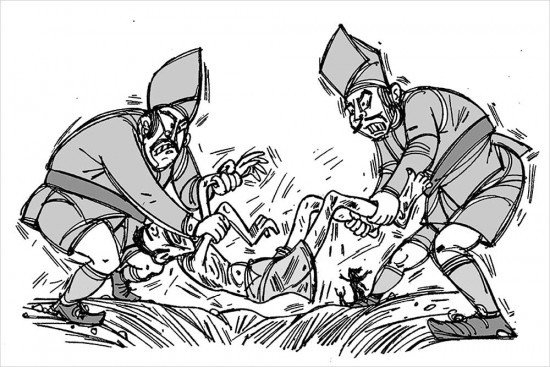 By the time Satyam arrived in Telaprolu, the Communists who had built the library were nowhere to be seen. They had all gone underground. Satyam knew what had been going on in neighbouring Telangana. He’d heard that, as the Indian army advanced, the guerrillas took their rifles and fled into the jungles of Warangal to the north. Those who didn’t escape were captured or shot dead.

The army then occupied the area and carried out what the government called its “pacification programme.” This meant that whole villages were razed and Communist sympathisers there rounded up and sent off to concentration camps. Where roads had been dug up to aid the guerrillas, Indian soldiers buried peasants alive in the trenches and forced the survivors to build new roads over these mass graves. The Nehru government’s atrocities in Telangana were even worse than the Razakars’.

And they were not confined to Telangana. Many people from Andhra, especially Krishna and Gun­tur, had gone to fight alongside the peasants of Telangana.

The Nehru government dispatched a special bat­talion of the army, the dreaded Malabar Police, to Krishna district in order to root out Communists and their supporters. By the time Satyam arrived in Telaprolu, scores of Communists there had been arrested and one shot dead. The Communist lea-der in the village, Senagala Viswanatha Reddy, had gone into hiding. A senior cadre in nearby Buddha­varam, a Kamma man named Paparayudu, was shot dead shortly after Satyam arrived.

But Satyam knew in his heart that the Telangana fighters would soon be back to liberate Krishna district and the entire region.

How did he know? He’d read what had happened in neighbouring China, where a great leader named Mao Zedong had led his peasant army on what was called the Long March....