Protests, arrests and rallies. VHP spoils for a fight. And an uneasy calm prevails Updates 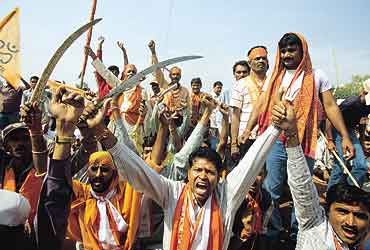 outlookindia.com
-0001-11-30T00:00:00+0553
Another chapter of the Ayodhya saga. By high noon on October 17, the VHP had lived up to its promise that "no power on earth" would stop it from reaching Ayodhya. In spite of security personnel outnumbering kar sevaks 10 to one for the past two days, highly-motivated VHP cadres managed to slip into the temple town through the Faizabad-Ayodhya railway track. VHP president Ashok Singhal, who had "gone underground" for the past three days, also lived up to the belief of the faithful that "woh Ayodhya mein prakat honge" (he will appear in Ayodhya). But as soon as Singhal, all dressed in saffron, made an appearance in karsevapuram, he was arrested along with 2,000 VHP-Bajrang Dal members. As many of them rushed to the roof of the building and pelted the security personnel with bricks and stones, leaving the police with no choice but to use tear gas and fire rubber bullets in the air.

The VHP had, after all, been spoiling for a fight for the past week—and it got one. All the efforts of the Centre and the state government to work a compromise went in vain. The skirmish in Ayodhya only served to vitiate the atmosphere. Even as he was arrested, Singhal announced that the VHP would enforce a nation-wide bandh on October 19.

Once again, the VHP had managed a mass mobilisation programme linked to Ayodhya on the eve of the assembly polls in four states. It is no coincidence that an equally large VHP agitation had taken place in February-March 2002 at the time of the Uttar Pradesh and Punjab assembly elections. It didn't really help the BJP, which lost power in Punjab and plummeted to third position in UP. But the day after this humiliating electoral defeat, kar sevaks returning from Ayodhya were incinerated in a train at Godhra, Gujarat. What followed is history. The VHP played a big role in Narendra Modi's landslide victory in Gujarat in December that year.

This time round as well the VHP was determined to make a massive show of strength. Explains a senior BJP leader, "The VHP has unfortunately become a single agenda outfit. They have to keep Ayodhya alive to keep themselves alive." Because the VHP was determined to exercise its "democratic right", the Centre had no choice but to agree to the UP government's request to send 95 companies of paramilitary forces. Thousands of arrests were made across the state and a senior police official told Outlook that some kar sevaks managed to slip into Ayodhya on D-day only because every jail in the state was completely packed.

Meanwhile, it's becoming increasingly clear that though the VHP can mobilise cadres, the entire movement is getting a jaded feel to it. The VHP rally earlier in Lucknow was a flop show where barely 500 volunteers turned up, several of whom were arrested. After the rally, Giriraj Kishore was allowed to march a few yards before the acharya was taken into custody.

Indeed, in Delhi as well, where there were no restrictions on the VHP, it's so-called "show of strength" on October 15 turned out to be pretty weak. Many of the sadhus and sants carted to the capital's Ramlila maidan slept soundly through the speeches of the VHP leaders. There was a overpowering sense of deja vu about the entire event. Yet, when asked by Outlook if he was running the risk of boring the nation to death, VHP shooting star Praveen Togadia retorted: "Those who get bored by Ayodhya should migrate to England!"

Togadia, along with other VHP leaders, worked hard at injecting some life into the audience. Introduced as "the man who gives nightmares to jehadis", he did his best to live up to this reputation. He adopted a rhetorical style best described as a high-pitched half-hour-long screech. And he really looked like he would burst with rage as he thundered about all the injustices wreaked on Hindus by Muslims, jehadis and secularists."We will build the Ram mandir. We will end terrorism. We will make India a Hindu rashtra. No one can stop us from reaching Ayodhya. Does anyone stop Muslims from going to Mecca?" he thundered in one breath.

In fact, Ram bhakts of the VHP persuasion appeared to be as worried about "jehadis" as about building a temple at Ayodhya. Many of the faithful who gathered for the VHP's Ayodhya rallies, carried banners that declared "Jehad ke dalalon ka sthan/Pakistan, Pakistan (all jehadis should go to Pakistan)." So much so that the jehad banners easily outnumbered those about the Ram mandir at the Delhi show. The rhetoric too was as much about Muslims as about Hindus. A sample from Acharya Dharmendra's high-voltage speech: "Islam is against usury and music. Yet no Muslim will survive a day without banking systems. And from where did musicians like Bismillah Khan, Zakir Hussain, Mohammad Rafi come? I say to Muslims, insult your own religion from morning to night. We are happy if you do that. But do not dare to insult Hindus..." To add to the overtly communal overtones of the agitation, Togadia openly threatened riots if stopped from reaching Ayodhya.

The BJP, meanwhile, acted coy about the VHP's actions. On the one hand, the Central leadership was in constant touch with Mulayam about the security arrangements. At the same time, the party refused to condemn the blatantly provocative statements of the VHP leaders. "We don't take such statements seriously," said party spokesperson Mukhtar Abbas Naqvi. "And we don't want to react to everything the VHP says or does. But we do believe they should be allowed to go to Ayodhya as they have promised that their programme will be peaceful." This was once again a case of the BJP wanting to eat its cake and have it too.

Another element of farce obtained in the fact that the Centre put recently-appointed minister of state for home Swami Chinmayanand in charge of monitoring the situation. A leading light of the VHP-BJP's temple movement, the Swami tried his best to appear impartial. He told Outlook, "It would be best if the VHP spoke with greater restraint and if Mulayam acted with greater restraint."

So, though the nuances were different, they all seemed part of one big happy Hindu family. Only Prime Minister Atal Behari Vajpayee appeared to be out of the loop. And for his deliberate distancing from the Ayodhya movement, he was yet again attacked by VHP leaders, with Togadia even equating Atal-Raj with "Aurangzeb-Raj".

The VHP, meanwhile, continues to insist that there is no political gameplan behind its actions. "It is a big lie to say that the VHP remembers Ayodhya only when elections come around. We have nothing to do with politics. For us, it is a matter of faith," says Acharya Dharmendra. Yet a few minutes later, he lunges into a direct attack on "Italy ki bhabhi". "We want to warn her that she can't play Vatican politics in India," he added. The political undertones of the VHP campaign was also reaffirmed by the good acharya shouting slogans like "M is for Mohammad/M is for Mehboob/M is for Mayawati/M is for Mulayam/M is for Muslims!"

Some may be inclined to dismiss the VHP as a bunch of lunatics. But as India has learnt time and again there is nothing funny about the consequences of their actions.