Earthen cups are replacing the plastic ones. Activists debate the practical implications of Laloo's policy. 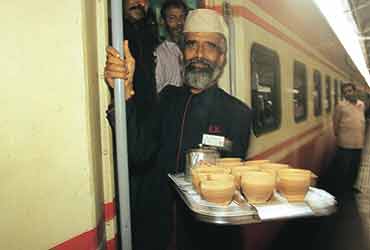 Except that this decision is more political than romantic in nature. In three to six months' time, all drinks served by the railways or nominated private caterers on trains and all stationary canteens and restaurants run by them or the IRCTC across the country will be in terracotta (burnt clay) cups or kulhars. The railways will follow this up with a ban on cola and other aerated drinks. So if you like plastic mugs or soft drinks, carry your own one and pack it back after use.

Though the order for kulhars has been passed and is already in operation in the canteens at Parliament, the PMO and Rail Bhavan plus some trains, it will take some time to be fully implemented since potters are a poor and unorganised lot. Laloo has advised them to organise themselves, form cooperatives and apply for tenders which is the usual way of getting things done in the railways. Laloo is also reportedly perturbed about the implications of his order and is seeking counsel on how to make this a success. After all, the order follows directly from the CMP—one of its objectives is to support and promote the unorganised informal sector, especially cottage industries. Pottery is one of those mentioned in the CMP.