Stop By An Oasis 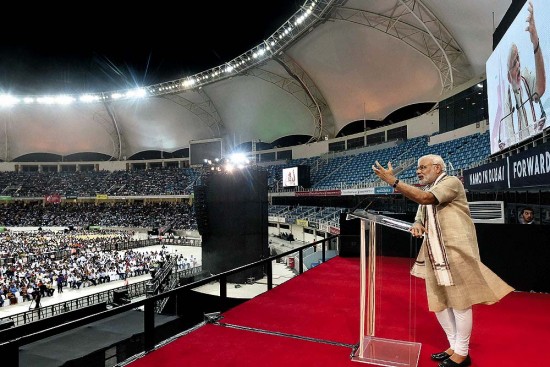 That Sheikh Mohammed Bin Zayed Al Nahyan, crown prince of Abu Dhabi and deputy supreme commander of the United Arab Emirates armed forces, went to the airport along with five of his brothers and five other ministers to receive Prime Minister Narendra Modi was an apt reflection of  the esteem in which the UAE holds India. Of the crown prince’s brothers, two are deputy prime ministers, one the national security advisor, one the foreign minister and one the managing director of the Abu Dhabi Investment Authority, one of the world’s largest sovereign wealth funds at nearly a trillion-dollar worth. Similarly, the fact that the UAE allowed, for the first time ever, a visiting foreign dignitary to address thousands of his compatriots in what was a loaded, hyper-nationalistic speech was another diplomatic coup, although it is feared that its content may vitiate the otherwise cordial relations between Indians and Pakistanis living in the country. Moreover, it is also apprehended that the hitherto covert activities of the Sangh parivar elements here will become more bold and organised.

This was the first visit by an Indian premier to the UAE in 34 years, although a close India-UAE relationship has thrived over the past few decades. It has always been a symbiotic relationship—the Indians needed jobs and business opportunities and the UAE needed affordable labour. This symbiosis and its inherent pathologies make our characteristic superpower-in-the-making posturing look untenable, even ludicrous, because millions of Indians came here in search of menial jobs and lived rough for decades on end without the comfort and company of their families.